Fish farmers in the Sepahijala district of Tripura have formed collectives to successfully rear fish seeds and table fish. This collective livelihood initiative has increased their incomes by reducing risks and costs 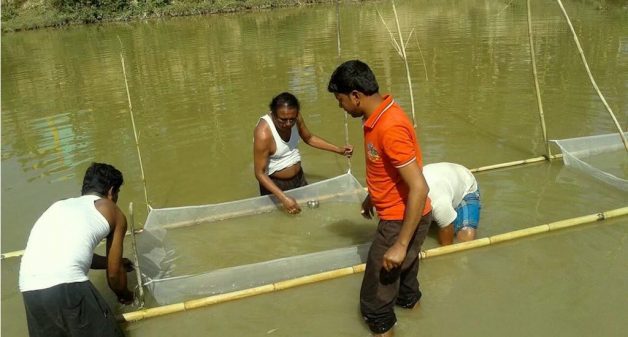 With a common goal, the fish farmers in Chandul village in Tripura work in groups, reducing cost and increasing profit (Photo by Pinki Ghosh)

Fish is the most cherished part in the daily diet of more than 95% of Tripura’s population. One of the smallest states of the northeastern region, Tripura is landlocked and hilly. Despite available resources, the state has a long way to go to achieve self-sufficiency in fish production.

As per the statistics of the Department of Fisheries, Tripura, an area of 23,477 ha presently being utilized for fish production is not sufficient to meet the demands. Importing fish of about 11,886 tons a year from other states, mainly Andhra Pradesh, and even from the neighboring country of Bangladesh, indicates the large demand-supply gap.

The per capita gap between fish production and consumption of 3.26 kg every year has presented a unique opportunity for the state as well as entrepreneurs to develop fish farming and improve the livelihoods of fish farmers.

The state government, with the support of Tata Trusts, has been working on replicable development models, fisheries being one of them. After assessing the potential, the fisheries department identified villages in six administrative blocks — Manu and Chaumanu of Dhalai district, Padmabil and Tulasikhar of Khowai district and Mohanbhog and Kathalia of Sepahijala district.

Villages with a large number of ponds, large area under culture fisheries, large number of fishers, contiguous spread of farms and those that were less prone to floods were chosen.

Chandul village in Mohanbhog block has a predominant tribal population that depends on agriculture for sustenance. Around 80% of the households have a pond measuring 1 kani (1,600 sq. meter) or more. Production was low and sufficient only for self-consumption, the reasons being non-availability of quality fish seed, and lack of knowledge about scientific way of rearing fish. 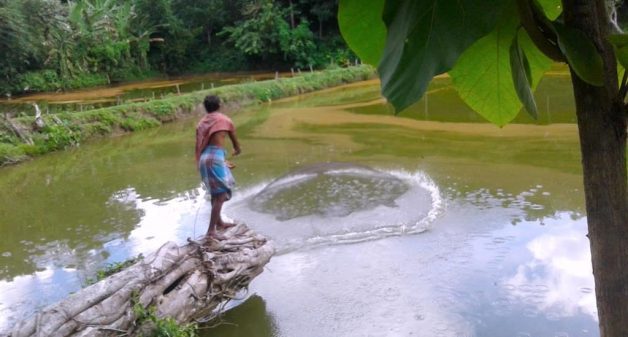 The villagers, in addition to collective fish farming in common leased ponds, rear fish in their individual ponds (Photo by Pinki Ghosh)

With 10 members including two women, Gomati Matshya Utpadan Samity is one of the activity groups in Chandul. All the members received training on fish farming. Identifying and procuring good quality fish seed has always been a challenge for fish farmers across Tripura. The current intervention’s focus is converting this challenge into an opportunity.

Two representatives of the group visited a hatchery in Udaipur in Tripura’s Gomati district and learnt about rearing of fish eggs in an artificially controlled surrounding, for commercial purpose. The exposure visit helped them build on the knowledge they had gained during training.

The representatives shared the knowledge gained from the exposure visit with their group members. Having understood the intricacies of nursery fish farming, that involved rearing the fish seed to any of their three stages, namely, spawn, fry or fingerling in a pond, the group decided to start nursery fish farming.

The group took a pond measuring 1.2 kani on lease, by sharing the investment costs equally. Equal investment lowered the risk for each of the new fish farmers. They prepared the pond and procured the required amount of spawns, the first stage of fish seed, in order to start nursery fishing.

After a month, the group was able to sell the fries and fingerlings, for a total net profit of Rs 93,250. The members decided to continue nursery fishing, as two or three cycles of nursery fishing can be done in a calendar year.

The group then learnt table fish rearing, where they rear fish to their full growth, when they are ready for consumption. Babul Dey, one of the group members visited a hatchery at Pabhoi in Assam, to learn the practical aspects. 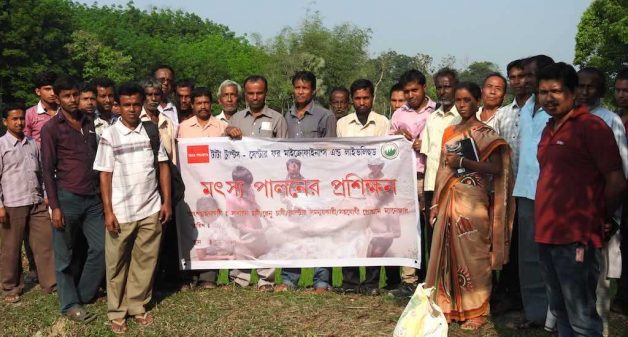 Having learnt low-cost scientific method of table fish rearing, Dey shared it with his group members. “The visit helped me learn about the preparation of fish feed, liming, manuring and harvesting,” Dey told VillageSquare.in.

Understanding the power of collective operations, the fish farmers work together with a common interest, sharing resources and procuring inputs in bulk, thus saving costs. Presently 152 activity groups with about 2,000 fish farmers practice culture fishery. The government plans to include 1,000 more fish farmers this year.

They sell the fish seeds within the enrolled members of the activity groups of Chandul, at lower than the market rate. They sell the excess to outsiders at market rate, after stocking the required seeds in their own ponds.

The success of the intervention indicates that collective nursery fishing can be a sustainable livelihood for the unemployed people of rural Tripura, as reduced risks, increased margins and increased likelihood of getting institutional support like loans are the strong aspects of working in groups.

Pinki Ghosh is an associate program manager in Centre for Microfinance and Livelihood. Views are personal.

Pinki Ghosh is an associate program manager in Centre for Microfinance and Livelihood.