Agariyas, the traditional saltpan workers in the Little Rann of Kutch, have switched from diesel to ecofriendly solar-powered pumps to lift brine that have boosted their earnings from saved costs 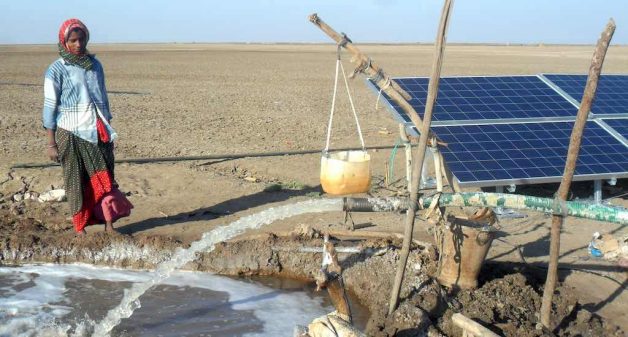 Viju Ben has been working in the saltpans of the Little Rann of Kutch for as long as she can remember. In all these years, never did the 51-year-old Ben realize the value of the sun’s golden rays, found in abundance in the semi-arid landscape. The same holds true for the other saltpan workers who produce about 70% of India’s salt. Not until they were introduced to the concept of solar energy a few years back.

Viju Ben’s is one of the 30,000 Agariya families in Gujarat’s Little Rann of Kutch involved in the tedious work of salt production. Experts say that the Rann of Kutch was under the sea centuries ago, until an earthquake exposed the seabed, leaving a massive desert that sprawls till the Arabian sea.

Every monsoon this desert gets submerged in briny seawater. Once the water starts receding around October, the Agariya community step in for their work. They pump the brine and direct it into rectangular saltpans, where they allow the natural process of evaporation to leave behind shiny white salt crystals. 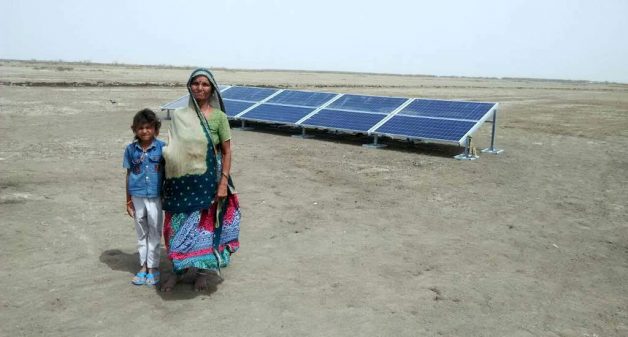 Replacing their old diesel water pumps with solar pumps has helped the Agariyas cut down their operational costs for saltmaking by a huge margin. Solar being non-polluting, they are breathing cleaner air too. “Solar energy has changed our lives forever,” Ben told VillageSquare.in.

Pumping the brine is not an overnight task, and with diesel pumps, not inexpensive. In a month, typically, an Agariya worker would require 1,200 – 1,300 liters of diesel for her pump. Given the high price of diesel (Rs 78 per liter currently) and its local transportation, it is a huge expenditure for the Agariyas.

In addition, there are costs for repair and maintenance of the diesel pumps, and for essentials like food. At the end of the eight-month season, a saltpan farmer is left with hardly Rs 35,000 – 40,000. Most of the workers also take an advance at the beginning of the season.

“After repaying that debt they are left with hardly any money,” said Devesh Shah, CEO of Grassroots Trading Network for Women (GTNfW), a non-profit organization floated by Self-Employed Women’s Association (SEWA) to provide solar pumps to its members.

“We provided these solar pumps in response to the dire need of an affordable credit that would help the Agariya women buy green technology and prosper,” Shah told VillageSquare.in.

In 2013, GTNfW provided a solar pump each to 10 Agariya families on a pilot project basis. After using the solar pumps for a month, the workers found that they could do the same work with just 400 liters of diesel. “This cut the production cost and increased their saving as they were able to save the money they would have spent on the additional 800 liters of diesel,” said Shah. 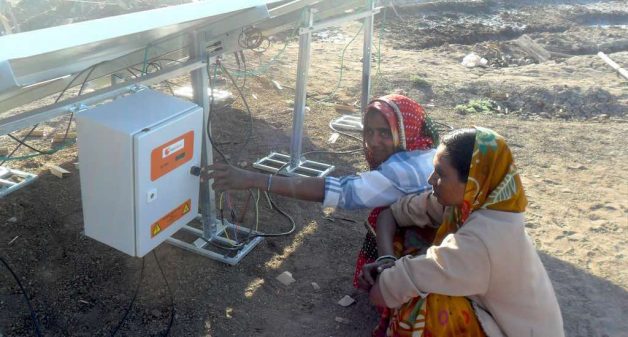 For the community this marked difference in expenditure was a big relief. In 2015, they replaced 200 more diesel pumps with solar pumps. In 2016, again another 200 and in 2017, 700 solar pumps were introduced.

“Solar pumps are more expensive than diesel pumps and that was an issue that needed to be addressed for the scheme to be successful,” Heena Ben, the SEWA district coordinator from Surendranagar told VillageSquare.in.

A solar pump costs approximately Rs 180,000. “We don’t have that kind of money to spare,” said the women. GTNfW and SEWA decided to help the workers by providing them loans through Shri Mahila Sewa Sahakari Bank Ltd, a sister organization of SEWA. “We considered this a special case and we offered seasonal repayment options that suit the workers’ needs,” said Heena Ben.

If a woman worker was able to save Rs 8,000 in a month, her monthly repayment installment was fixed as Rs 6,000, so that she would have a minimum of Rs 2,000 in hand to cover her livelihood expenditures.

This system worked well because even after repaying the loan, the workers had some savings left. This prevented the loan from becoming overwhelming. The workers could see a better future with better financial condition. Partner agencies like the International Finance Corporation (IFC) helped in creating a blended financing structure that helped the Agariya women access credit.

The workers earn around Rs 160 per ton of salt – much lower than the market price of about Rs 25,000 per ton. Having undergone training to improve the quantity and quality of the salt they produce, the Agariyas are determined to negotiate for a better price.

Viju Ben is happy with the way her life has changed with the use of solar energy. She is happy about the clean environment in which they are able to raise their children. “All my three children use the solar water pump and it has helped us save a lot of money,” Ben told VillageSquare.in. “My children are now able to send their children to school which we could not imagine earlier; technology is moving ahead and I am glad we are moving with it.”

Azera Parveen Rahman is a journalist from Assam. Views are personal.