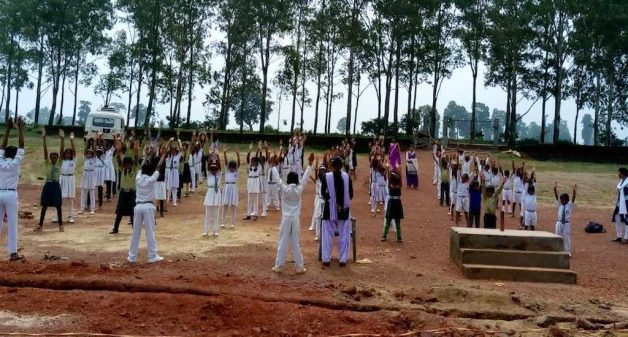 The Grandeur School in the mining hills of Surguja, built through community support, enables the education of Adivasi and Dalit children (Photo by Goldy M George)

Mainpat, an administrative block in Surguja district and situated at a height of 3,500 feet above sea level, is a terrain rich in natural and mineral resources. The bauxite deposits in this Fifth Schedule Area has always attracted mining companies, although the local tribal and Dalit communities have not benefitted from this interest.

In a place without schools, colleges and hospitals, the tribal inhabitants gave their land for mining, hoping for a change for the better. However, now they are critical of the government’s approach in not settling land right issues before assigning mining permits.

“We felt that the presence of mining companies would add to our livelihoods, but we feel cheated,” Kamal Bhagat of Sapnadar village told VillageSquare.in. However, the residents of the mining villages have come together to educate their children, with the hope that education would improve their lives.

It was hard to come by schools in the region. In the few schools in Mainpat, there were hardly any tribal children. Kirti Rai came up with the idea of starting a school to educate tribal children, when her husband was posted as a teacher in Mainpat. Three Dalit women – Kirti Rai, Saroj Gaikwad and Shakuntala Jatwar – from different walks of life came together and mobilized the community to start a school for their children.

The women brought the community in the mining villages together and started Grandeur Convent School in 2016. “We always engaged with community,” Gaikwad told VillageSquare.in. “We raised six lakhs and the community pooled their money and gave two lakhs.”

Rajendra, the superintendent of the Ambikapur jail in the district, attributes his education to have helped him come up in life, despite his humble background. Hence he always stood for children’s education. “So when the proposal to start this school came up, as a community, we decided immediately to support, so that our children could get educated,” he told VillageSquare.in.

The administration waived the fee, despite not receiving any grant from government or other sources. “We waived the fees of scheduled caste (SC) and scheduled tribe (ST) children who were not able to pay,” Rai told VillageSquare.in. “Some of them pay half the fee and some pay even a quarter of the fee.” 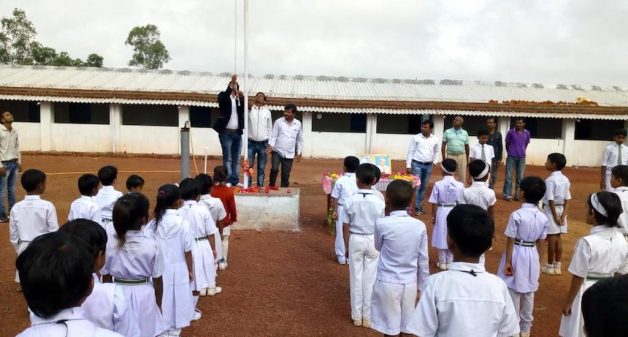 Some parents have come forward to support the school. They have formed a Parent Teacher Association (PTA) to overcome the financial crisis. For instance, it is the PTA that decides the bus fare. They are a part of the teachers’ selection panel too.

Another difficulty was to find trained staff in the hilly area. “We have found some trained teachers, yet some challenges remain,” Suraj Rai told VillageSquare.in. “We motivate the teachers to develope different ways and methods, as it is not easy to use the same tools to teach these children coming from forest villages,” said Rajendra.

Despite tremendous geo-cultural and economic challenges, the enrolment has increased since inception. From a single shed, the school has progressed to an eight-room school building. It now conducts classes from nursery to class VI, affiliated to Government of Chhattisgarh’s Department of School Education. The administration plans to get affiliation from Central Board of Secondary Education in future.

Despite many government schools in nearby villages, educating tribal children is difficult due to language barriers, lack of teaching tools, methods, etc. “We experiment with different teaching methods within our limitations,” Hemant Khatkar, one of the teachers, told VillageSquare.in.

The teachers develop games such as ‘search and find’ based on the curriculum and engage the children on discussions about random topics. They also plan to buy a projector to use pictorial and visual learning mediums.

The teachers allow the students to learn as a group. The students discuss among themselves in tribal language and present the answers in their own way. The teachers try to make learning more fun and make the students curious to know more.

“Apart from lectures, we teach through different methods like games, activities, sports, discussion, dance, drama, competitions, besides participation in public events, carnivals, and the like,” Urvashi Bhagat, a teacher told VillageSquare.in. The teachers place a lot of importance on the students’ personality development and nurturing their individual talents.

It was obvious from the students’ testimonials that they enjoyed their activity-based learning. Sumitra of class V does not want to go back to her previous school. “Learning is fun here,” she told VillageSquare.in. “I love the Oraon dance and singing songs.” While Aditi of class V likes her teachers and the way they teach, Shyam of class VI loves playing games. 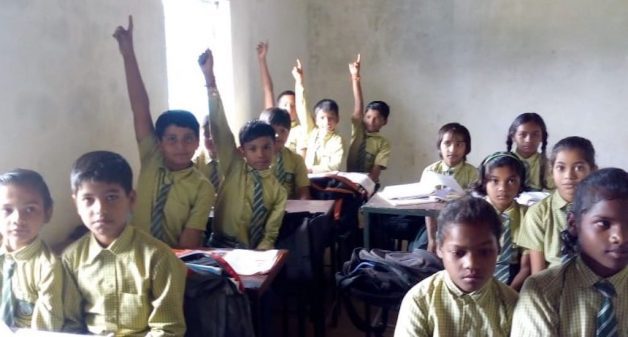 Shakuntala Jatwar, who visits the school to motivate the students as well as the teachers, wants every child to go beyond caste, gender and class, and learn. ‘While government schools have failed to educate children in these forest patches, this school enables the Adivasi kids get quality education,” Jatwar told VillageSquare.in.

Kamlesh Singh, a government teacher, finds Grandeur Convent the best school in the region. “Two children from my family study here and it has been a better learning experience than any other school,” he told VillageSquare.in. “This is unlike other schools where kids are not interested in going to school.”

Education is a catalyst in the development of India’s Dalits and tribal people that would help them build their confidence and join the mainstream society. “It was very depressing to lose our land to mining,” Suraj Baghel of Kudaridih village told VillageSquare.in. “Our efforts to build the life of our children, especially educating them, keeps our hopes and spirits alive.”

Goldy M George, a PhD in social science, is a writer and development worker based in Chhattisgarh. He has been working on Dalit and tribal issues in central India for several years. Views are personal.

Goldy M George, a PhD in social science, is a writer and development worker based in Chhattisgarh. He has been working on Dalit and tribal issues in central India for several years.