With farm income failing to keep pace with their debts, a large number of small and marginal farmers in Punjab and Haryana have started supplementing household earnings through daily wage labor 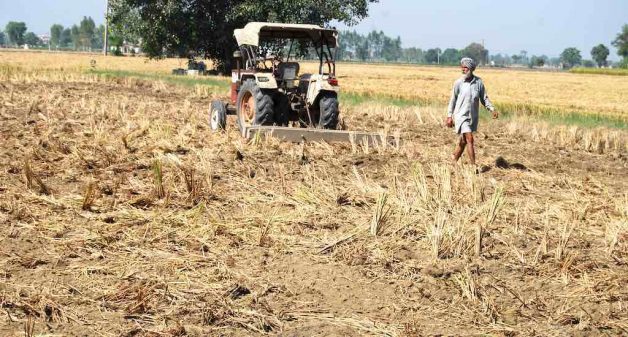 While the farmers of Punjab and Haryana face opprobrium for burning crop stubble that leads to severe air pollution in Delhi and other parts of north India, there is very little attention paid to their daily grind, particularly the marginal and small farmers who constitute a substantial chunk of population in these relatively prosperous states that constitute the breadbasket of India. Falling income, mounting debts and high interest rates on loans have driven most of them to daily wages for survival.

In Punjab, 35.4% of farm households fall in the category of small and marginal farmers (holding less than five acres of land), and 65.4% in Haryana. Further, Punjab’s 64.51% rural households are landless, compared to 55.91% in Haryana, against a national average of 56.41%.

Debts are endemic to these small and marginal farmers. “I remember my family being in debt, right from my grandfather’s time,” Harjinder Singh, a 30-year-old farmer who owns two acres of land in Gharachon village in the Bhawanigarh administrative block of Punjab’s Sangrur district, told VillageSquare.in.

He has a debt of Rs 8 lakh – Rs 3 lakh taken from Malwa Gramin Bank and Rs 5 lakh from an arhatiya, one of the commission agents at the mandi (wholesale market), where all crop procurement operations take place. Though the private lender charges 12% interest, and the banks an effective rate of 4% (government provides 3% interest subvention), he relies on the agent, since loan from formal institutions is limited to Rs 3 lakh.

Satwinder Singh, a 40-year-old farmer of Jhaneri village, owning three acres of land, has Rs 5.76 lakh loan from three different sources – a bank, a farmers’ cooperative and an agent. “On paper, the loans from the bank and cooperative are for farming, but these are actually for my children’s education and healthcare,” Satwinder Singh told VillageSquare.in. “In the absence of good government schools and hospitals, I have to rely only on private institutions.”

In Haryana’s Kaithal district, it is no different for Nahar Singh, who owns two acres in Kharodi village of Guhla administrative block, or for Satnarayan Sharma from Peedal village who owns 0.75 acre.

Nahar Singh has a debt of Rs 7.5 lakh and Sharma a debt of Rs 9.5 lakh, taken from a commission agent, bank and farmers’ cooperative. Both the farmers and their sons work as daily wage laborers for most part of the year, to run their families of four and five respectively.

“My son studied up to class XII on my insistence, but found no jobs,” Sharma told VillageSquare.in. Seeing his brother’s plight, Sharma’s younger son shows no interest in studies and helps his father in his farm.

According to the National Sample Survey Office’s survey of 2013, the average outstanding loan against farm households in Punjab is Rs 119,500 (third highest in the country) and Haryana Rs 79,000 (seventh highest), while the national average is Rs 47,000. About 53.2% farm households in Punjab, and 42.3% in Haryana are in debt, as against the national average of 51.9%.

Several farmers in both the blocks of Punjab and Haryana say that their farm income has fallen as the input costs – fertilizers, pesticides, insecticides, hiring cost of tractors and other farm implements – have grown disproportionately in the past few years. 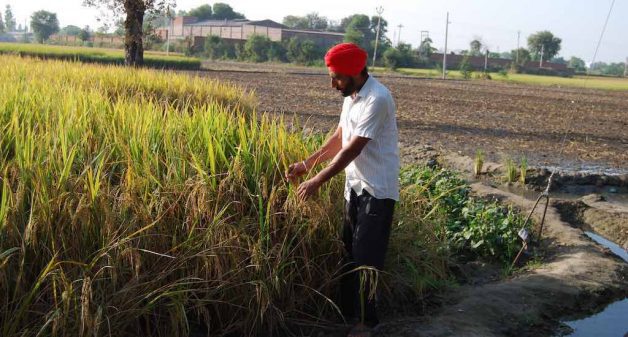 Satwinder Singh, a small farmer of Jhaneri village in Punjab, grows paddy as government procures it at a minimum support price (Photo by Prasanna Mohanty)

“If we are growing paddy, which is not what Punjab farmers used to grow a few decades ago, it is because the government procures it at a fixed minimum support price (MSP) and we get an assured income,” Harjinder Singh told VillageSquare.in. “I admit that paddy made us rich, but only till the mid-90s, after which the input costs have gone up significantly while the MSP (minimum support price) has failed to keep pace. Now paddy is ruining us.” MSP is the price the government pays farmers to buy selected crops that are fed into the subsidized public distribution system.

It is true that Punjab and Haryana top the list in average farm household incomes in India. However, Sukhpal Singh pointed out in an article the Economic and Political Weekly that the annual net income of marginal and small farm households were Rs 72,000 and Rs 1.78 lakh, respectively. Their income is much lower than their debt burden of Rs 1.82 lakh and Rs 2.70 lakh, respectively, for 2016-17.

That such farmers are banking on daily wages for survival is evident from the SECC 2011 data, which shows that manual casual labor is the main source of income for 48.03% rural households in Punjab and 42.7% in Haryana. Though these percentages are a little less than the national average of 51.8%, it is a worrying development nonetheless.

Sukhpal Singh said that small farming in particular is no longer a viable occupation as incomes are not sufficient to meet the basic expenses of domestic consumption, healthcare and education.

“Neither Punjab nor Haryana has any policy for marginal and small farmers, except for providing free electricity, water and subsidies to buy farm implements,” said Sucha Singh Gill of the Centre for Research in Rural and Industrial Development (CRRID), Chandigarh.

Agriculture policies of both the states have no specific policy prescriptions for small and marginal farmers. Punjab’s 2013 policy lists future course of growth for farmers, particularly the small and marginal and also the agricultural laborers.

Haryana’s policy of 2014 acknowledges “the plight of farmers, particularly small and marginal” and says “a lot needs to be done” about land reforms but all it prescribes are: giving credit at low rate of interest and revisiting rules and procedures for land reforms.

Gill pointed at the solutions that the Planning Commission had formulated – farm cooperatives, self-help groups and farmer producer organizations (FPOs) to help the small and marginal farmers in particular.

“The FPOs are in their infancy in Punjab and Haryana where National Bank for Agriculture and Rural Development (NABARD), entrusted with the task of promoting them, started working two years ago on a pilot basis,” said Gill.

According to him, an excellent short-term solution could have been the rural job guarantee scheme under Mahatma Gandhi National Rural Employment Guarantee Act (MGNREGA) providing work to distressed farmers.

Gill said that the rich and influential farmers of the two states derailed the program, apparently to get cheap labor for their farms. “We conducted studies in Punjab and Haryana in 2010-11 and found that 50% of the villages didn’t have MGNREGA operations,” Gill told VillageSquare.in.

A visit to several villages in Bhawanigarh and Guhla blocks confirmed that MGNREGA works were few and far between. “There has been no MGNREGA work so far this year and very little last year,” Krishan Kumar Gujjar, village council chief of Jhaneri told VillageSquare.in.

In such scenario, there is little hope for the small and marginal farmers in the states that form the food basket of the country.

“Industrialization of rural areas is the answer and farming should become a part-time profession,” agriculture economist and chancellor of Punjab University Sardar Singh Johl told VillageSquare.in. Gill said that non-farm employment would be a major long- term solution but there is no such policy in view.

Prasanna Mohanty is a senior journalist based in New Delhi. Views are personal.

Prasanna Mohanty is a senior journalist based in New Delhi.