The story of Paromita Mondal, a teenage girl living in rural Bengal, is testimony to the fact that the efforts of government and development organizations to retain girls in school have slowly started bearing results 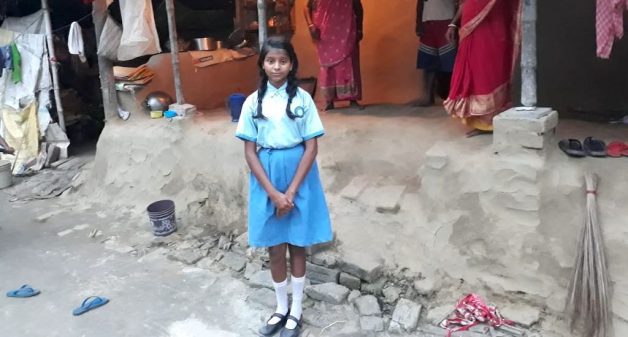 Paromita Mondal, 13, lives with her parents, siblings and grandmother in a one-room hut in Kalinagar village in South 24 Parganas district of West Bengal. A class VII student of the village school, Paromita wants to become a teacher when she grows up.

The child sex ratio (CSR) in West Bengal is 956, as per Census 2011, that is, there are 956 girls per 1,000 boys in the 0-6 age group. West Bengal’s CSR is not as alarming as that in Haryana (879) or Delhi (868). Given such statistics, the Beti Bachao, Beti Padhao (BBBP), or Save the Girl Child, Educate the Girl Child campaign of the Ministry of Women and Child Development assumed more significance.

Combined efforts by the ministry and developmental organizations to prevent girl children from dropping out of school, in an effort to improve child sex ratio, have slowly started bearing results.

Eking out a living

Paromita’s father and mother have a flower shop. They wake up very early and by 3 am are on a bus that takes them to a distant wholesale market from where they procure fresh flowers. They then journey back to set up their stall in front of the temple in Kalinagar. Pilgrims buy flowers from them to offer to the deities.

A good day’s earnings rarely exceed Rs 200. Monthly income from the sale of flowers is Rs 6,000 at best. Sameer, Paromita’s 17-year-old brother, had to drop out of school a few years ago. Sometimes he is able to get odd jobs, but often helps his parents at the flower stall. 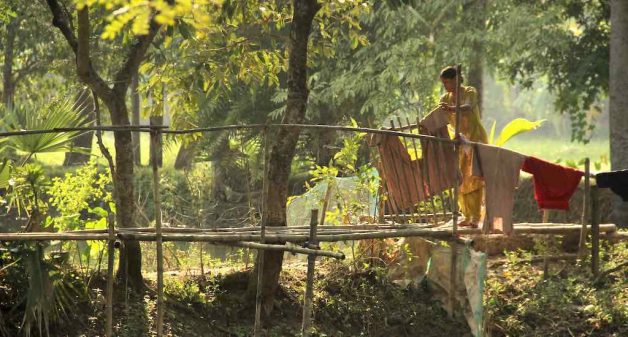 With lack of avenues for better livelihoods, education holds promise to the villagers of Kalinagar (Photo by Prahlad Naskar)

The United Nation estimates that 836 million people all over the world live in extreme poverty. As per the international poverty line of US $ 1.90 (about Rs 139) per person per day, Paromita’s family of six should have a monthly income of about Rs 25,000 to not be considered poor. They are one of the 10% worldwide that lives on less than US $ 1.90 per person per day.

Paromita’s mother Sumitra Mondal brings in a regular supplemental income, although small, by doing embroidery on saris. When Paromita completed Class 6, her father, who spends a large part of the family’s meager earnings on alcohol, wanted her to help her mother with the artwork, so as to increase their earnings.

Paromita dropped out of school and started helping her mom. She helped her old grandmother Urmila Mondal with the household chores too. However, seeing her friends go to school made her wish there was some way she too could continue her studies.

Paromita’s story would resonate with that of a lot of children, girls in particular, trapped in poverty.

Amrita SeRVe (Self Reliant Village) project started by Mata Amritanandamayi, a religious leader, in 2013, works towards sustainable development of impoverished rural communities. Amrita SeRVe monitors attendance in government schools in villages, as part of its Swasth Kanya, Sakshar Kanya (Healthy Girl Child, Educated Girl Child) program, and helps girls such as Paromita get back to school. 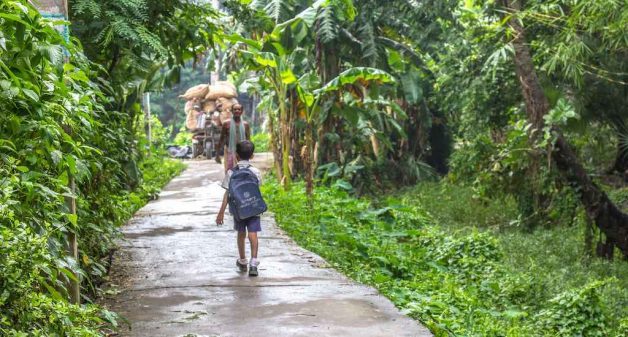 As is evident at the grassroots level, education of boys is also important for Beti Bachao Beti Padhao to succeed (Photo by Prahlad Naskar)

Amrita SeRVe launched the program in April 2017, to support the BBBP scheme of the Ministry of Women and Child Development. Village coordinators of the program ensure that girls do not drop out of school. Wherever possible, they intervene so that the girls can get back to school.

When Paromita stopped going to school, Prahlad Naskar, the village coordinator, spoke to Paromita and her parents. Paromita’s mother wanted her to go back to school but her father Ananth Mondal wanted her to continue helping her mother.

Education is free in middle school, but from class 7 onwards, the school charges a monthly fee of Rs 50. When Naskar explained the circumstances to the school principal, he reduced the fee to Rs 20 per month. When Paromita’s father expressed his inability to pay Rs 20 per month, the principal waived the fee.

When Paromita returned joyously to school, her friends Anupama, Ruksha and Shampa helped her learn the lessons she had missed. “Some girls whose families can afford to pay for their higher education, do go to college,” Paromita told VillageSquare.in. “But most girls in our community get married by the age of 15 or 16.”

Under the Swasth Kanya program, Paromita is the first girl in West Bengal to resume her studies. “Since helping Paromita, two girls and two boys have approached me to help them get back to school,” Naskar told VillageSquare.in.

Paromita hopes that she and her 10-year-old sister Ria can complete their studies, get good jobs and support their family in future. If girls such as Paromita have the opportunity to complete their education and get a job, then there is a way for their families to battle poverty.

Anju Bist quit her job in PricewaterhouseCoopers in the US and returned to India to work in the development sector. She is currently co-director of Amrita Serve. Views are personal.

Anju Bist quit her job in PricewaterhouseCoopers in the US and returned to India to work in the development sector. She is currently co-director of Amrita Serve.