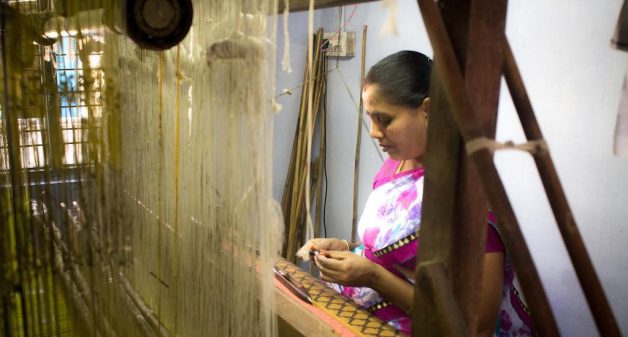 About 40km from Coimbatore is Negamam, a small place in southern Tamil Nadu. From over 200 years, weavers have been weaving exquisite handloom cotton sarees, more popularly known as Negamam cotton.

Rojaramani Mohanraj, a weaver, starts her day at 11am, just after finishing her morning chores of cooking, filling water, and sending her teenaged daughter to school. Until 6pm, Rojaramani is busy at her loom. In the midst, she checks in the kitchen, and multitasks other household work.

As she is engrossed in weaving a saree in a medley of traditional yellow and brown, she says, “It takes three days to weave one saree. The master weaver gives the design and the materials. After I weave, I hand it over to him, and he takes them to shops in Negamam and Coimbatore. We get Rs 800-1,000 for weaving a saree. The labor charge for making the saree varies with the design.”

Most of the people in Negamam have been weaving for their livelihood. However, in the last 5-10 years, many weavers are moving away from their traditional occupation. And these numbers are only increasing every day. In a village, where every member in the family-from a child to an elderly person is involved in the traditional family business, this change happened with social and economic changes.

Rojaramani’s husband Mohan Raj joined Ethicus, a company that creates exclusive handloom sarees, as a weaver. Unable to sustain an income, he stopped weaving in his own loom. “The family creates a piece of handloom saree by taking different roles, and this cannot be done by one person alone,” says Mohan Raj.

Rojaramani and Mohan Raj’s daughter Soundarya has helped her parents from childhood. Pursuing computer science and accountancy, this 18-year-old girl will not continue the family tradition. “We do not want her to become a weaver. Today, people do not want to get married to weavers,” Rojaramani told VillageSquare.in.

Krishnakumar Murugesh, a master weaver from almost two decades, concurs. “If we say that we are weavers, families refuse to give their daughter in hand. How can we ask the next generation to become weavers? Marriage is such an important thing. The next generation is gaining education, earning money, say, Rs 5,000-10,000,” he says. “If they work hard, weaving can also give this income, but there is no importance for this profession.” 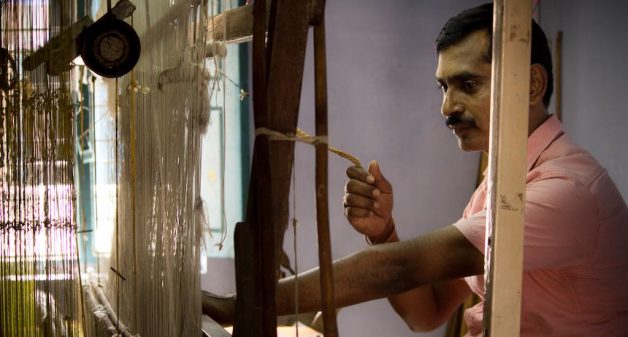 Vijayalakshmi Nachiar, founder of sustainable fashion brand Ethicus, has been working with weavers from Negamam to create handloom sarees. “I have seen weavers from the last nine years. Now, nobody below the age of 40 weaves. This is a tough job and families do not want to be involved in this,” Nachiar told VillageSquare.in. “Youngsters are moving out to cities. Earlier, children would apprentice during free time, now the parents do not even teach them and they say, what’s the point? They say children don’t get married if they become weavers.”

“When we quote the price of a handloom saree, people ask us why it is expensive,” adds Rojaramani.

It’s not just the competition from power loom. It is also about how the handloom designs are easily copied and manufactured by the power loom. Krishnakumar says, “Whatever designs we make, people making sarees from power loom make it too. You will not know the difference between a power loom and a handloom saree. They copy the same designs.”

Despite a drop in the number of weavers, and lesser production of these sarees, sales are not good. “Imagine what would have happened if production was higher,” asks Krishnakumar.

The goods and services tax (GST) dented their incomes too. Krishnakumar says, “We need to have bills. And we cannot give bills for everything. For sarees it is all right, but it is not possible for small things like thread. Things that were earlier available for lesser money, now costs more. For shopkeepers, it is not a problem, but for a weaver it is. We cannot ask them to pay GST.”

This year, Kerala floods impacted their Onam sales we well.

Vijayalakshmi says, “As everything is handmade here, there will be an increased demand for labor. Labor charges will go up. Unless we have patrons who are willing to pay for this, it is difficult to sustain. Weavers belong to a certain community, and the entire community feels they don’t want to do it anymore.”

She adds, “There is a need for skill development. Weavers do not want to train at all. Today, we need to do something where skill is maintained because with one generation gone, the entire skill is going to disappear.”

There is a cooperative here for handloom weavers, but it is not helping the community. Mohan Raj says, “The biggest mistake from the government is giving subsidy directly to the cooperatives. They write bogus account, and it has not helped the weaver community.”

Rojaramani says, “There will be no weaver but they show as if there are weavers and take the money.” Krishnakumar says, “The money does not reach us. If government gives Rs 10,000, people take their own share, and then when it comes to us, there is nothing left.”

Ethicus works with weavers and designers to design handloom sarees from Negamam. Weavers like Mohan Raj, now, work for them. Vijayalakshmi says, “We are making high-end products and they cannot be copied. We use local skills sets, typical loom and jacquards of this area, but our design and product are completely different. Though the sarees are sold for high end customers, there are people willing to pay more for these sarees.”

She adds, “The skill needs to be taken to a different level, but the weavers are resistant to do anything new, they do not want to adapt. We need to have designers working at the grassroots for that to happen.”

Mohan Raj says, “There is a demand for good quality products, but we are not able to recognize it. In companies, there is a demand for weavers, as the number of weavers is now dwindling. If everyone does only weaving, there will be development in the community.”