Returning to their roots, educated youth in Tamil Nadu have boosted agricultural production manifold by modernizing their ancestral land, and by using Israeli farming technology 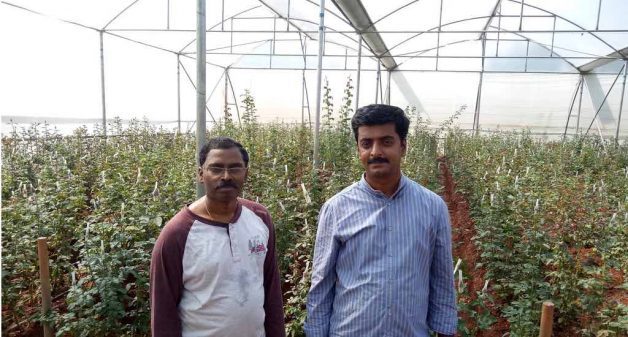 Sudeesh K. (32) quit his software job with a Bengaluru-based multinational company to become a full-time farmer. He has joined his father Kandhasamy in their ancestral land in Jakeri, a sparsely populated village in Kelamangalam administrative block of Krishnagiri district. In two acres, they cultivate roses and carnations in two poly greenhouses under controlled conditions, using Israeli technology.

The neighboring farm belongs to Srinivasan, a general manager in a multinational software company. He drives down from Bengaluru on weekends to attend to his hi-tech rose farm. He plans to take the plunge and become a full-time farmer.

Across four administrative blocks in Krishnagiri District — Kelamangalam, Denkanikottai, Shoolagiri and Hosur — poly greenhouses and shade net structures are ubiquitous. Those that drive the hi-tech horticulture boom are young engineers, management professionals, employees from information technology (IT) sector and the like.

The trend negates the battle for survival of the average Indian farmer, and the children not seeming keen to pick up the mantle. According to the Annual Status of Education Report – 2017, released by the non-profit organization Pratham, just 1.2% children of farmers aspired to be a farmer.

In Krishnagiri district, the major cultivated area is rain-fed. Over the last few decades, the district witnessed a shift to horticulture, due to its climate and proximity to Bengaluru, the major market for horticultural crops. The undulating dry terrain from Rayakottai to Hosur has no perennial water source and is unsuitable for water-intensive crops.

Hi-tech horticulture’s beginnings in the area coincide with IT boom in Bengaluru, with the last five years witnessing phenomenal growth, aggressively pursued by sons of small and marginal farmers, besides first generation farmers.

Anamaiah Gowdu (33) quit his corporate job and returned to Chettipally, his native village, to modernize his ancestral farm. He grows colored capsicums. Anamaiah Gowdu, who quit his corporate job and modernized his ancestral farm, checking on pesticide spraying operation in his greenhouse capsicum farm (Photo by George Rajashekaran)

Crops cultivated in the open, under natural conditions, are more susceptible to sudden changes in temperature, humidity, light intensity and other conditions that affect quality and yield. The Israeli technology helps control them and the four vital elements for photosynthesis.

The poly green sheet filters ultraviolet and infrared rays, allowing radiation measuring 400 to 700 nano meters, under which photosynthesis happens. Micro irrigation system ensures the roots get required water, cutting water use by 90%. Carbon-di-oxide emitted by plants at night is retained inside the enclosure, boosting starch production.

Putting up a naturally ventilated poly green house in one-acre costs about Rs 28 lakh. Under the National Horticulture Mission, farmers get a subsidy of Rs16.88 lakh for poly green and shade net structures in one acre. The drip irrigation system is also heavily subsidized.

Raising nurseries under controlled environment is catching up too. Farmers get Rs 14.2 lakh per acre for shade net nurseries. Drip irrigation subsidy is Rs1.13 lakh per hectare, plus Goods and Services Tax (GST), under Pradhan Mantri Fasal Bima Yojana (PMFBY) scheme. Banks too offer loans because of high returns. 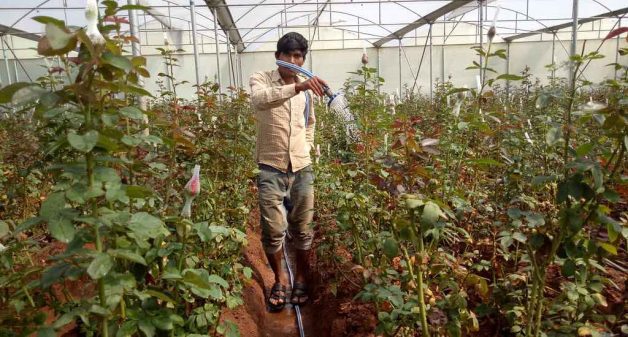 As part of hi-tech cultivation, a worker washes rose plants growing in a poly house, to keep them cool (Photo by George Rajashekaran)

One acre of poly greenhouse cultivation fetches an annual income of Rs25 lakh per annum, as against Rs5 lakh in open cultivation. “The loan can be repaid in a year and the returns thereafter are profit for the farmer,” said Ganesh.

Subramani K. (32) of Chettipally village in Kelamangalam administrative block, had to discontinue his schooling and take up farming when his father passed away. “Cultivating groundnut and ragi in three acres under rain-fed conditions, I struggled to sustain,” Subramani told VillageSquare.in. But he broke the cycle growing green and colored capsicums in two poly green houses, each over one acre land.

Subramani sells capsicum at Rs 50/kilo at the farm gate. Buyers from Bengaluru pick the produce every day, pack them and transport to various markets across the country. In one acre poly greenhouse 14,000 plants can be grown, each costing Rs8.5 including seed cost and wage. Three months after planting, capsicum is harvested nine months a year at a rate of 60 tons per acre.

“The spectacular results and returns are not coming easy,” Srinivasan told VillageSquare.in. “In naturally ventilated houses, increase in outside temperature entails semi-manual washing of plants to keep them cool.”

Each rose bud has to be capped with synthetic mesh to control its size. Rose stems ready for harvest during sunny days have to be precooled. Soil and water need to be tested regularly. According to Sudeesh one cannot succeed in hi-tech farming without personal attention. “We keep updating ourselves with new techniques and news about market conditions,” said Srinivasan.

Subramani recalled his childhood days, when they could hardly buy two sets of clothes a year. He could not afford to repair the house. “Today I have two motorcycles and a car, and I have rebuilt our house,” he said.

About 2,000 acres are under hi-tech cultivation in Krishnagiri district. In Chettipally, there are 200 poly green houses, and new ones are coming up.

Farmers like Sudeesh double up as fabricators and consultants. Farmers are diversifying into other crops like radish, double beans, cauliflower, cabbage and carrot. Villagers are leveling dry and rocky lands to put up poly green and shade net houses, as the ensuing prosperity seems worth the risks.

George Rajashekaran is a journalist based at Salem, Tamil Nadu. Views are personal.

George Rajasekaran is a journalist based at Salem, Tamil Nadu.sexyxxx.ccsexyxxx.cc