Weaving a future, meter by meter

Mimicking forests, progressive farmers across India have started transforming farms into a layered cropping system that is climate resilient and more productive 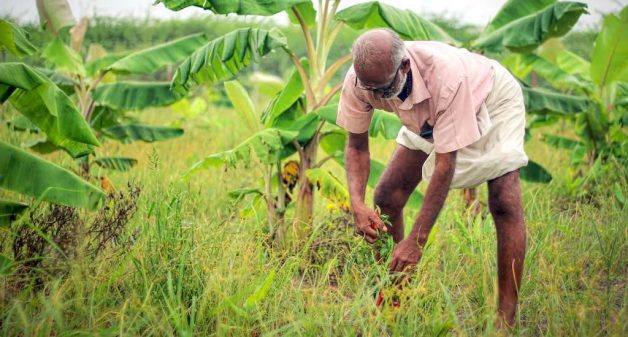 A food forest in the development phase, where farmer Thangavelu has been able to harvest a better yield from ground crops (Photo by Balasubramaniam N.)

While Amazon rainforests remain the world’s largest intact forest, according to recent research, seemingly untouched forests were in fact manmade food forests. For thousands of years, humans were dependent on forests for food. In time, villages and farms replaced forests.

However, unprecedented climate change is causing a rethink on the way we grow our food. More and more farmers in India are looking at resilient food forests to sustain themselves, with reduced irrigation needs and improved productivity; and to help the country through the current agrarian crisis.

According to Kumaravelu, a forest doesn’t require tilling, weed removal, pesticide or any human intervention. “Imagine that such a forest houses food that we can consume, and that is the basis of food forests,” he said.

Food forests are designed to mimic natural forests and usually have seven layers: a canopy layer of tall fruit and nut trees, a sub-canopy layer of dwarf trees, a shrub layer of fruit bushes, a herbaceous layer, a ground cover, a rhizosphere layer of root crops and a vertical layer of vines.

For farmer Thangavelu (62), a visit to Subash Palekar’s zero-budget farm in 2008 was the first step in this direction. The visit made him shift to multi-cropping, from growing paddy for generations. When Kumaravelu wanted someone to partner on a small food forest of30 cents in Poothurai village in Villupuram district, Tamil Nadu, Thangavelu jumped at the opportunity. 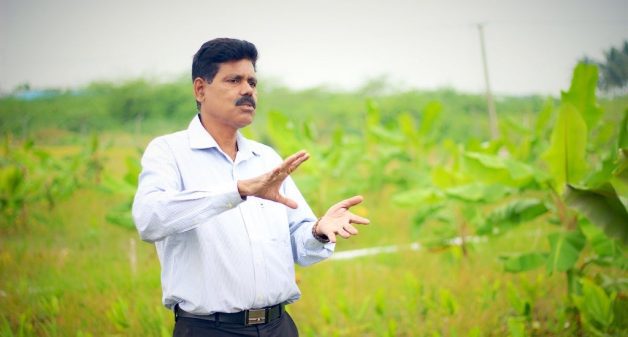 Kumaravelu advocates food forests as the solution to the impacts of climate change and other agrarian problems (Photo by Balasubramaniam N.)

“From creating a live fence with local trees, to setting up a rain hose that replicates a drizzle without disturbing the soil, we built the forest, step by step. We picked up perennial species like banana and turmeric that require minimal manual intervention,” Thangavelu told VillageSquare.in.

Surrounded by parched farms and some rice fields, Thangavelu’s forest is a different universe. The large canopy trees ensure that the climate inside is cooler, despite the scorching sun. Crops like papaya, banana, turmeric, chilli, pulses, gourds, pepper, and flowers grow in a lush, almost wild atmosphere.

According to Thangavelu, turmeric that normally yields an average of 300 gm per plant yielded 1kg per plant in the food forest. In 2018, he created another food forest successfully in his own land in Thirubuvanai in Puducherry.

Here again, the design is focused on creating a self-sustainable system. He is building a system of seven layers from where he can keep harvesting with very less labor. “We planted saplings like banana and marigold that help one another,” he told VillageSquare.in. “The rain hose which now uses only 1/10th of normal irrigation will soon not be needed as mulching too happens from the leaves of existing trees.”

Every food forest has a slightly different design, based on the local ecosystem. Sandeep Saxena, who has worked on multiple food forests Aranyaani in Madhya Pradesh, has included free roaming poultry, livestock, bees and fishes to these seven layers.

Explaining how he and his team went about turning a 150-acre barren land into a food forest, Saxena said, “The first step we took to bring some life into the barren landscape was to grow some hardy shrubs like besharam and lantana, as these would grow with little help.” Once they grew, the team planted hardy trees like peepal or neem, which took around a year to settle. 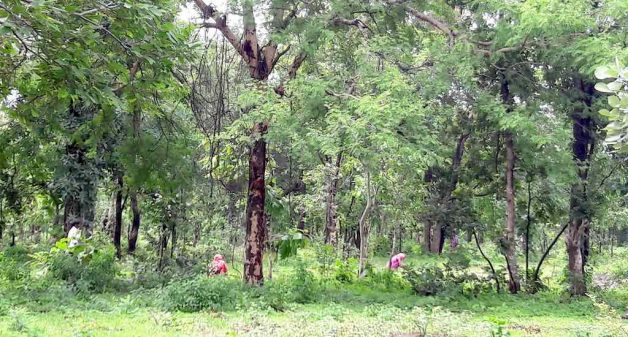 “The following year, we planted smaller trees like lemon and cranberry, while using plants like vetiver and lemongrass to strengthen soil structure,” Saxena told VillageSquare.in. “In the fourth year, we had a lively ecosystem with a layer of biomass. We built the lowest layer with turmeric, sweet potato, etc.” He has also built ponds as a source of water for the birds and livestock (not for the trees).

It took four to seven years to build each of his food forests and he now has over 175 species. According to Saxena, unlike organic farming, a food forest doesn’t involve tilling that harms the soil, nor does it use genetically modified (GM) crops or a mono-cropping system. “For instance, we use regenerative seeds. Unlike GM turmeric, the remains of our turmeric can be left in the soil to regrow, without disturbing its structure.”

Strengthening the soil structure so comes handy in handling extreme weather events, said Saxena. When there are heavy downpours, the porous forest soil usually soaks up the water instead of flooding the land.

“These trees also have the ability to absorb moisture from the air and hence are better equipped to handle droughts. Trees like neem and mulberry also make sure that temperature is moderate, even in extreme heat or cold winter.”

Farmer Samir Bordoloi of Assam has used his food forest of 3 acres to not only build a successful ecosystem inside the forest but also to connect with local communities to revive their indigenous crops. Bordoloi, who started conventional farming in 2012, started experimenting with food forests in 2016.

“I started growing crops and plants in the forest as I wanted a way out of the shifting cultivation we practice here,” Bordoloi told VillageSquare.in. “As the growth was tremendous in the forest, we slowly replicated the forest model in our farms, using indigenous crops like yam, Assam lemon, poniol, king chillis Garcinia, carambola, etc.”

As for making profit, Saxena recommends that farmers use 2 to 3 mainstay species to make money. Bordoloi believes that value-addition would be more profitable. “For instance, local herb rosella is sold for as low as Rs10/kg but when we create herbal tea, it sells at Rs400/kg,” he said.

“The forests often show us the way. For example we found that green chillies thrive in bamboo canopies. We get around 80 kg of chilli in a bamboo canopy and we sell it for Rs 200/ kg,” said Bordoloi. Both farmers promote farm stays as an offbeat way to supplement their income.

Bordoloi networked with women to revive traditional recipes using these produce. He has now reached out to over 150 schools to create community-based forest gardens. “Children are my ambassadors and they can take these food forests to different places,” he said.

Kumaravelu agrees that community–based food forest can indeed create an impact in bringing the public healthy produce. “In Tamil Nadu, we had a scheme that allowed farming in government-owned wastelands; food forests could be scaled up in such places. Also larger food forests could bring back the rains. As for individual small farmers, the time taken to setup food forests can still be a deterrent,” he said.