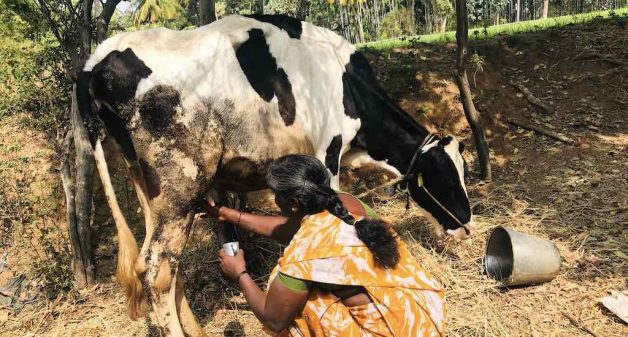 Shivamma, secretary of Stree Shakti women self-help group in Somlara village of Tumkur district who runs a milk collection sub-center, says collection has declined in the past one month due to drought (Photo by Nidhi Jamwal)

Shivamma is secretary of Stree Shakti women self-help group in Somlara village of Tumkur district in Karnataka. Everyday more than 15 women dairy farmers in her village in Madhugiri block supply milk to Shivamma’s milk sub-center attached with the Karnataka Milk Federation (KMF), the second-largest co-operative dairy federation in the country owned and managed by milk farmers of Karnataka.

All the 10 blocks of Tumkur district, including Madhugiri, have been declared drought-hit by the state government. And because of drought, dairy farmers have taken a hit. “I used to daily collect 90 liters of milk from women dairy farmers in my village, but for the last one month, due to drought and water scarcity, the milk collection is down to 60 liters a day,” Shivamma told VillageSquare.in. “In the coming two to three months, as peak summer sets in, I expect the collection to go down further. Dairy farmers in the state are staring at huge losses.”

About 3km from Somlara village is the Halu Utpadakara Mahila Sahakara Sangh (halu means milk in Kannada), a women’s milk co-operative in Taigondanahalli that has been collecting milk from women dairy farmers for the last 20 years and supplying to the KMF. “Farmers bring milk twice a day. Till last December, I was receiving 135 liters milk in the morning and 135 liters in the evening. But, now the collection is down to 80 liters in morning and 80 liters in evening. We are facing an acute drought,” said Manjula, secretary of the milk co-operative.

On the one hand, milk production has gone down. In the other, fodder costs have jumped up. “All the farmers registered with the KMF are supplied (sold) fodder by the milk federation. But, the cost of fodder has gone up from Rs 880 per bag of 50 kg dry cattle feed (in the form of pellets) to Rs 960 per bag,” said Manjula.

Sufferings of dairy farmers are not limited to Tumkur district. Statewide 156 of the total 176 blocks are in the grips of acute drought due to deficient rainfall in both the southwest monsoon and northeast monsoon seasons last year. 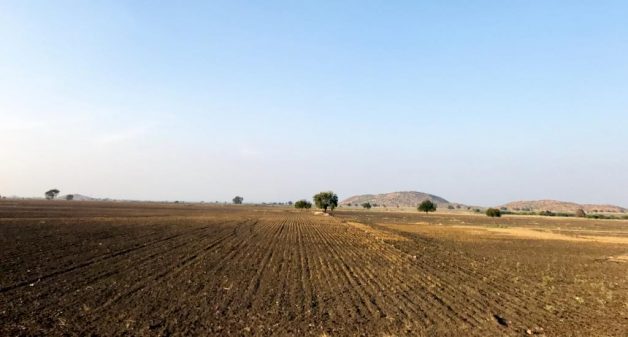 As per an official of KMF at Ballari (previously known as Bellary) in north Karnataka, the milk federation used to daily collect 90,000 liters milk from the farmers in the district. “But in the last two months, there has been a decline of 5,000 liters milk collection a day,” the official told VillageSquare.in. “Because of drought, maize production has reduced, hence the cost of cattle feed had to be increased. In Ballari district alone, where all seven blocks are drought-hit, over 500 tons of cattle feed a month are still being supplied to 14,000 dairy farmers.”

Milk procurement from farmers is important in Karnataka as 80 percent of state’s dairy farmers directly sell milk to KMF. The state has Ksheera Bhagya program to distribute milk to school and daycare (anganwadi) children five times a week, the first state in the country to do so.

Till mid last year, there was a glut of milk in the state and the milk federation was finding it difficult to dispose off excess stock. But, with the present drought scenario, milk collection is expected to come down in the state.

“When there is excess milk collection, we cannot earn a profit as prices crash. In a drought year, we again suffer,” complained Shivamma. “We are paid Rs 27 per liter of milk, which is not profitable. The price should be at least Rs 30 a liter.” But, as per news reports, KMF is already facing financial problems and finding it difficult to sell milk it procures from farmers.

But, the state is drought-hit. And the reason is erratic and uneven rainfall. Last southwest monsoon season, the north interior Karnataka meteorological subdivision had a deficient rainfall of minus 29 percent. 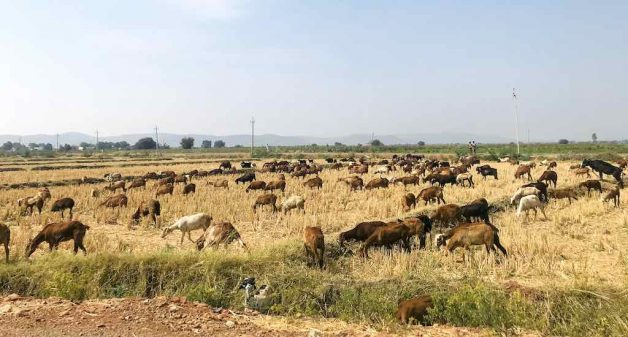 On an average, one head of cattle needs 5 kg fodder a day. District officials are procuring fodder from farmers at a cost of Rs 6,000 per ton to run cattle and fodder camps in drought-hit blocks of the state (Photo by Nidhi Jamwal)

To make matters worse, last year’s northeast monsoon rainfall (between October and December), too, was substantially below normal. Northeast monsoon brings rainfall to south interior Karnataka subdivision. But, because of its poor performance, several districts in south interior Karnataka subdivision have registered deficient rainfall. For instance, Kolar, Chikaballapura and Tumkur districts had rainfall departure of minus 59 percent, minus 72 percent and minus 39 percent, respectively, in the last northeast monsoon season.

Predictably, the state is reeling under drought and has sought drought relief of Rs 2,500 crore from the central government, which has released Rs 900 crore.

The next few months till the arrival of southwest monsoon are crucial as water scarcity is expected to increase with the rise in heat. State and district officials are making arrangements for cattle camps and sale of subsidized fodder to the farmers.

“Ballari district has a total cattle population (does not include goats and sheep, etc.) of 4.74 lakh. We have identified 1.56 lakh cattle in 140 villages of the district that need help in terms of fodder in the next few months,” informed a district official of animal husbandry department. “On an average, one cattle needs 5 kg of fodder a day. This translates to a requirement of 780,000 kg fodder every day for the next two to three months.”

“We also plan to start five gaushalas (cow shelters) and 11 fodder camps in the district,” the official added. In gaushalas, farmers can leave their cattle, whereas fodder camps will sell subsidized fodder to farmers at a rate of Rs 2 per kg. The district officials have already procured over 800 tons of fodder (paddy stubble) from farmers at a rate of Rs 6,000 per ton. “Last year, we had to procure 10,000 ton fodder for our district, as even that was a drought year for us. This is the second consecutive drought year,” said the official.

Whereas cattle farmers are expected to receive some relief after setting up of cattle camps early next month (and these camps would continue till the arrival of southwest monsoon), those rearing goats and sheep are preparing for all eventualities. “This year summer will be very harsh. We have no land, no farming, and only rear 40 sheep. Some of our sheep will not survive this bara (bara means drought in Kannada),” said Venkat Ramanappa of Hosakere village in Kolar district, which received deficient rainfall in both southwest monsoon and northeast monsoon seasons.

Nidhi Jamwal is a journalist based in Mumbai. Views are personal.