Priests from Tamil Nadu, who migrated to Kerala for temple duties centuries ago, have put their culinary skills to good use, augmenting household incomes and the local economy 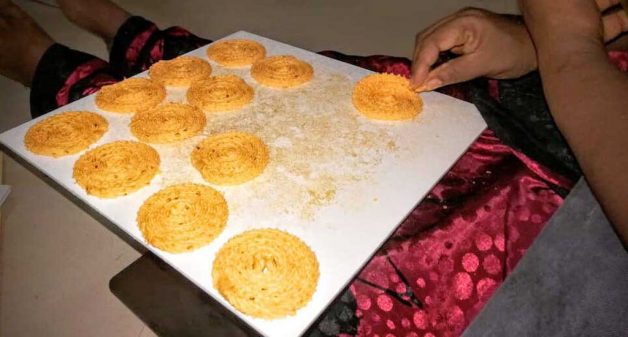 Kalpathi, on the banks of a river by the same name, is a heritage village, known for the famed annual temple car festival known as Kalpathi Ratholsavam. The 10-day chariot festival, held in November, is one of the important festivals of Kerala.

The festival centers on the 15th century Sri Visalakshi Sametha Sri Viswanatha Swamy Temple in Kalpathi in Palakkad district. In addition to the religious fame, the village is now earning a name for itself in a different domain — as a hub of traditional snacks, popularly known as Kalpathi kondattams.

Though the snacks are known as Kalpathi kondattams, they trace their origin to the neighboring state of Tamil Nadu. The king of Palakkad is believed to have invited Brahmins from Tamil Nadu to perform pooja at the Kalpathi temple every day.

Gradually more people, especially temple priests, from Thanjavur, Trichy and other places of Tamil Nadu came and settled down. The Brahmin settlements, known as agraharams, spread across Palakkad district, started in Kalpathi, more than 550 years ago.

Performing temple rituals and teaching Sanskrit are the main sources of livelihood for the community that is known for religiously following its customs and rituals. Most of them teach Carnatic music as well.

“Our ancestors tried hard to make both ends meet,” Vaithy, a shop owner recollecting his childhood days, told VillageSquare.in. “Income from the works we did at the temple was not only meager and seasonal, it was not sufficient to feed the family.” 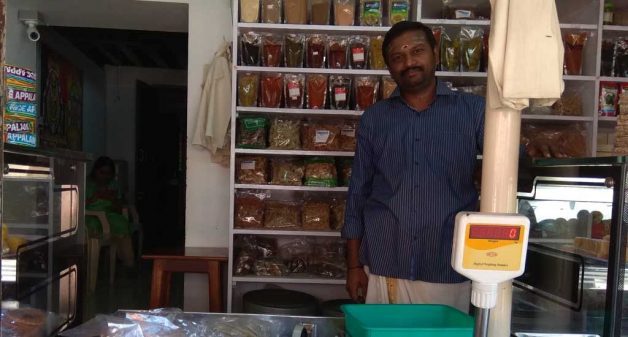 The community has a rich vegetarian culinary culture. Women from the priests’ families, decided to use their culinary skills to make money, as kondattams and pickles were part of their daily meals and the food items and sweets they prepared on all special occasions were popular in their neighborhoods.

“Gradually we started making the products in slightly larger quantities, since the response from the public was good,” L.V. Guruvayurappan, who runs an outlet that had been started by his father in New Kalpathi, told VillageSquare.in. “Now the entrances to most of our houses have been converted to shops to sell the traditional food items.”

“Our kondattams, pickles and sweets have traditional taste and long shelf life. That’s why people from distant places come here, to buy our products,” C.V. Ananthan, a 66-year-old native, who runs his ancestral tea stall in Old Kalpathi told VillageSquare.in.

“We have our own age-old cooking and preserving techniques that have been passed down through generations,” said Sakunthala Ammal. “Our sweets are popular because we prepare them with good quality ingredients. The kondattams stay crispy for longer period because we sun-dry them and use only natural preservatives.”

“We make all the snacks and pickles by hand and so we cannot make them in bulk quantity,” Sakunthala Ammal, known for her pickle making skills, told VillageSquare.in. “That’s what makes our preparations popular.” 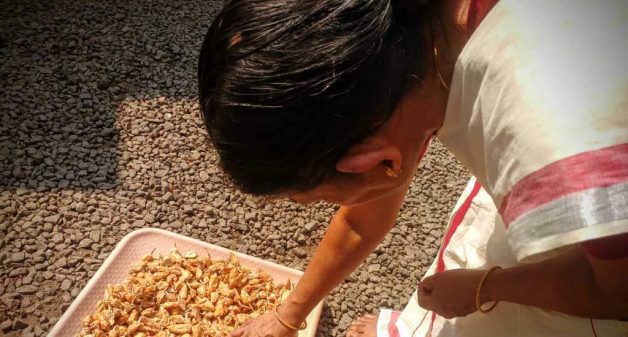 Women carry out most of the production of snacks and pickles at Kalpathi, supplementing family income (Photo by Chithra Ajith)

Each street looks like a garland, with houses on each side and a broad common yard in the middle. Women sit in groups in the yards and do the cleaning, cutting and all the preparatory work, besides drying. Eswari Ammal, 76, makes rice and jackfruit papads for her regular customers. “I live alone. My son who runs a vegetarian restaurant in Mumbai also sells the kondattams I make,” Eswari Ammal told VillageSquare.in.

In addition to their regular customers, women supply snacks to local shops and traders. “Some units functioning in nearby Lakshminarayanapuram buy products from agraharams and export them to different countries. This fetches us a good income,” said Sakunthala Ammal.

Some of the families have extended their culinary skills to eateries and catering services. “Among our breakfast fare, pongal is popular,” said Ananthan. “ My grandfather started this Lakshmi Tea Stall and my father developed it to what it is today.” His entire family is engaged in the business. The temple and the various festivals that happen there bring good business for all the eateries and snack shops.

“We distribute high quality raw materials to the villagers and they prepare kadumanga without vinegar and oil which assures freshness for even three years. We sell these authentic agrahara food online and responses have been very good,” said Pratheep. Local outlets, online sale and export of Kalpathi kondattams have developed the rural economy.