Shifting to non-forest livelihoods has helped landless families around Manas National Park to avoid human-animal conflicts, and earn more without denuding the forests 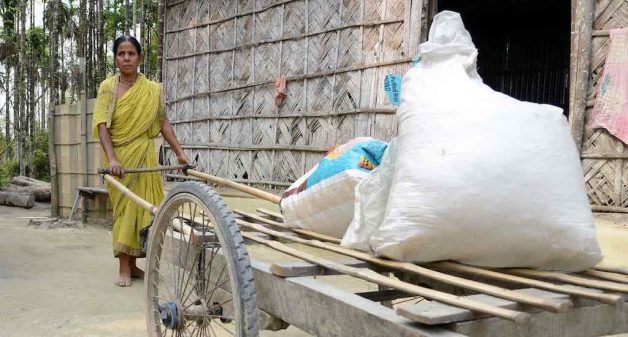 For Sabitri Barman in her 50s, a handcart plays a major role in earning her livelihood in a remote village near the Manas National Park in Assam near the India-Bhutan international border. She has been pulling the cart for more than 15 years, for various sources of income, ever since her husband Nirmal Barman died.

The items she carries in the cart have changed over the years though. Earlier, like many in her neighborhood, she collected firewood from the forests and used the cart to bring it back. Her children were young. “Being at a loss what to do, I collected firewood from the forests and sold it in nearby markets,” she said. It fetched her around Rs 300 a week.

Life continued to be difficult. To meet the expenses of the marriage of her daughters, she had to lease out the areca nut garden, which she thought she would never be able to recover. But now, she sees a ray of hope. The same cart that she used to ferry firewood from the forest is now her means to enhance her income, and that too without harming the forests.

Most of the people, including women, residing in the fringes of the park have been dependent solely on the forest for ages, collecting and selling firewood and other produce. A conservation program is now helping residents living in the forest fringes opt for alternative livelihoods.

Located in the Himalayan foothills in western Assam, Manas was originally a game reserve since 1928 and became a tiger reserve in 1974, a World Heritage Site in 1985, and a Biosphere Reserve in 1989. Then, it was declared a National Park in 1990.

Spread over an area of 500 sq. km, the park has extensive grasslands and is famous for its unique scenic beauty. The park harbors more than 20 endangered species. It is contiguous with the Buxa Tiger Reserve in West Bengal. In 2003, it was declared part of Chirang-Ripu Elephant Reserve, which serves as the international corridor for elephant migration between Indian and Bhutan. 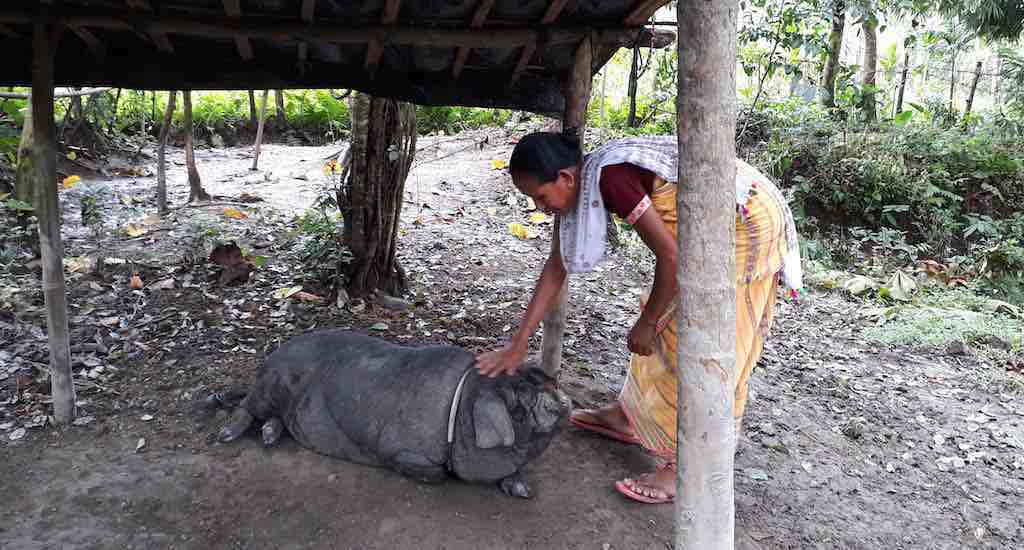 Anima Basumatary, who lives near the national park and used to depend on the forests, now earns by rearing pigs (Photo by Abdul Gani)

According to Bibhuti Prasad Lahkar, a conservationist and head of the project, Manas is crucial for biodiversity not just in India, but also in Asia. He considers it highly important from tiger conservation perspective as well. “There are 40 species of mammals in Kaziranga, whereas here it’s 61. That in itself indicates the importance of Manas National Park,” Lahkar told VillageSquare.in.

Manas Tiger Conservation Program (MTCP), led by Aaranyak, an environmental organization, and being implemented in partnership with the Forest Department, Bodoland Territorial Council, Wildlife Conservation Trust, Panthera and Awely is initiating change among the people living in the fringe areas of the national park, by helping them choose alternate livelihoods.

Villagers also witness human-animal conflict as wild elephants frequently visit the areas looking for food and find venturing into the forests more risky. “Now, I sell puffed rice in the market and in the neighborhood and it fetches me more money,” Sabitri Barman told VillageSquare.in.

Like Barman, other women living in the periphery areas of the national park have shifted to alternative livelihood. The women who used to collect firewood and other produce from the forest, now rear goats and pigs besides, preparing puffed rice and turmeric powder among others.

Barman walks about 4km, pushing her cart to the nearest marketplace. “Besides the weekly market, I also visit the nearby areas to sell my product,” said Barman. She said that people like it and some even order for it. She earns about Rs 400 per 10 kg of puffed rice.

Barman now earns about Rs 1,000 and sometimes more in a week. As her daughter helps her, she plans to include more products. She has also started rearing goats. Now, she is able to save some money. She has repaid some of the loans she took to get her daughters married. 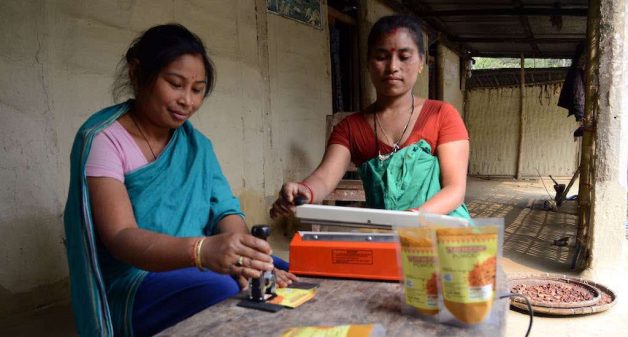 Anima Basumatary, a widow from Thwribari village, too faced the same problems after her husband died in January last year. Her husband Manin Basumatary was a daily wage earner but he had been ill for a long time before he died. As he was the sole breadwinner of the family, Basumatary had to depend on the forest for her livelihood.

She too was hit by the acute financial crisis, but is financially stable now. She is now into piggery, starting with one female pig in 2017. She gets around Rs 3,000 selling a piglet. So far she has sold at least 10 piglets. “In the first cycle I earned Rs 12,400 and in the second cycle I got Rs 5,900,” Basumatary told VillageSquare.in. “It helped me repay the loan.”

This has motivated other women like Kamini Rai of No 1 Barpathar village, which falls in the fringe area, to take up other livelihoods. Rai and her neighbors have formed a self-help group called Rupali. With MTCP’s support, they have started a grinding unit and sell ground turmeric powder in the local market. “We have just started, and want to do more,” Rai told VillageSquare.in. “We have applied for loan of Rs 1 lakh.”

Lahkar said that their small initiative is to work on conservation livelihood and make the women self-dependent individuals. He emphasized the need to stop people from being dependent on the forest. “Since it’s a huge area and it’s not possible to cover every family, we have targeted 1,400 families,” said Lahkar. “Others should also take the initiative to carry these efforts forward.”

Abdul Gani is a journalist based in Guwahati. Views are personal.