With a little help from the government and specialized agencies, the promotion of dairy farming among the tribal people of central and eastern India has potential to lift millions out of poverty 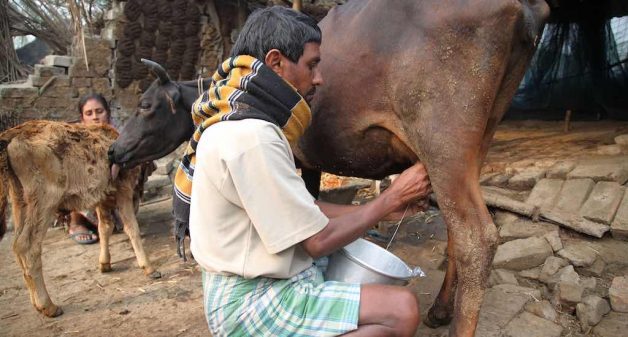 It sounds counter-intuitive, but where water is short, there is plenty of milk! The rain-starved, drought-prone districts in western India have become rich in dairying in the past 50 years. In the seventies and the eighties, Mehsana, Kolar, Chittoor, Ahmednagar, Sabarkantha and Bikaner districts in Gujarat and Rajasthan had shown huge rise in milk production under the National Dairy Development Board (NDDB) programs. Each of them is in the semi-arid, tropical zone.

On the other hand, rain-rich districts in those states did not show good milk production. This pattern has been amplified manifold now that Banas Dairy based in Banaskantha district in Gujarat has proved a sustained miracle in the desert. That back-of-beyond, desertifying and drought-prone district has become and remained the highest milk producer in the country for well over a decade now. Banas Dairy procures a whopping 6 million liters of milk a day, four times that of Mehsana, the champion of the eighties, and almost twice that of Amul, the longstanding face of Indian dairying.

Other than the plains tribes in north India, tribal people in general are considered forest dwellers and casual, incidental agriculturists. If one roams around in central Indian tribal belt inhabited by Gonds, Baigas, Kolams, Kuis, Mundas, Oraons and Santhals, one finds it difficult even to get milk tea in the villages. It is often said that tribal folk believe that milk is meant for calves of the bovines and not for human use. No one really seriously tried to promote dairying in tribal habitations till recently.

Vasundhara Dairy in Valsad in Gujarat demonstrated with sustained and solid results that the Bhil tribal people in that area (Vasavas, Valvis and Chowdharies) could roar out of poverty by rearing dairy animals. This has created a new possibility of promoting milk production for poverty reduction in tribal areas in central, eastern and northeastern regions as well.

It must be noted with emphasis that Valsad is close to Surat, a huge and rich milk-consuming district and not far from Mumbai, among the largest markets for liquid milk. The growth of dairying in Valsad tends to prove Verghese Kurien’s dictum that what you need is a sustained market and people will learn dairying and overcome their constraints to cater to it.

These regions tend to be undulating. The usual pattern of settlement is that each village is on one or multiple hillocks and lower lands are used for growing paddy. During the monsoons, rains are intense, and many districts record as high as 1,500 mm rainfall.

These tribal people find much better use for male buffalo used for puddling paddy farms than for female buffaloes. There is an abundance of biomass in forests, common lands and farm boundaries. Free grazing after harvesting the kharif crop is the usual norm in most of these regions. During summers one finds barren lands all over since most of the places are starved of irrigation and hence grow a single crop.

Goat is a more prominent and numerous livestock than bovines. Cattle in most villages are left to fend for itself and graze in forestlands around the villages. One can see hoards of cattle returning in the evening and then again herded together for the night.

Tribal people find supplementary income from forests, rather than from animal husbandry. Dairying is practiced by a few communities of non-tribal extraction, typically referred as yadavs or gwalas in those belts. Grass, which grows in the forest, is allowed to be cut, but in quite a few places, rather than using it for their own dairy animals, tribal people give it at throwaway prices to middlemen, who sell it to such specialized dairy producers.

The recent social issues connected with cattle culling have made matters worse as the population of unproductive animals keeps rising and cluttering the available commons. In this background, the question is whether one can ever make a successful income generating activity out of dairying in these tribal belts.

There are agro-climatic and physiographic issues in tribal hinterlands — which would need to be tackled in addition to the issues of feeding, breeding and management of bovines — for dairying to become a powerful instrument of poverty reduction in these ares. Experiments done in Jharkhand about a decade back amply demonstrates this very salutary impact on poverty reduction.

Those experiments failed not because milk production did not result in good incomes but because irresponsible politicians encouraged producers to default en-masse on the loans that had been arranged for them for procuring animals. These efforts were arranged around a growing Ranchi market. Thus, the most important question always is if there is a ready and easy to identify market proximate to these eastern tribal regions.

The macro-picture is encouraging. Despite becoming the largest milk producing country in the country, milk marketers see the Indian production falling short of demand over time. This is due to the established pattern of higher milk and other animal products consumption with rise in incomes. As the per capita disposable income rises, which it will with the country growing economically at 7% per annum, the demand for milk too will rise.

Thus there appears a small reason to worry about market for milk in general. The main question is having a ready, easy to access and well-paying market that can be exploited by currently unorganized and poorly developed producing regions. Yet, the potential and promise is too tempting to throw away. The key question is whether any one would be willing to steer a concerted program for dairy development in these areas.

No one other than organizations interested in developing such markets and linking them to the poor tribal people can help create such an access. Dairy industry does provide huge scope for increasing farmers’ incomes as well as creating jobs in the value chain.

These benefits brought to bear on the lives of tribal people living in the central and eastern regions will produce desirable results for them and for the country. We do hope that policy making agencies and bodies like the NDDB take these regions seriously and the government makes adequate financial support available for the task.