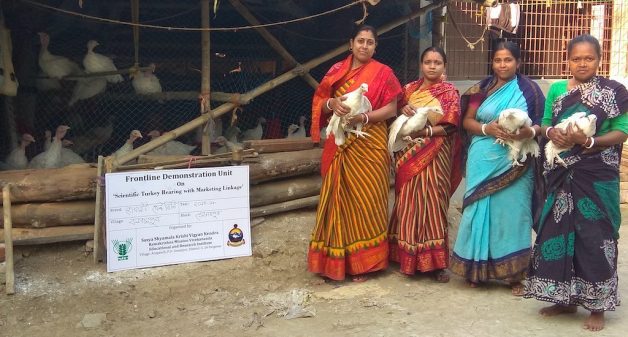 The Status of Microfinance in India report brought out by National Bank for Agriculture and Rural Development (NABARD) has showed that coverage of self-help groups (SHGs) under SHG – bank linkage program (SHG-BLP) in West Bengal jumped from 3.44 lakh in 2015-16 to 4.46 lakh in 2016-17.

The numbers, impressive as they sound, obscure a hard reality. Gainful, continuous self-employment through the SHG route is tough to find and sustain, especially by rural women who are inadequately equipped in terms of market linkages.

Against such odds, the story of Mamata Nadu and four SHGs, namely Janani, Ma Tara, Pushpa and Matangini, who took to rearing turkeys, holds out promise for rural women who have limited exposure but are willing to work hard and convert opportunity into profit.

Panchayat & Rural Development Department of the Government of West Bengal is the nodal agency for implementation of poverty alleviation pro­grams. At the district level, zilla parishad, the apex body of the three-tier system of local self-government is the implementing agency for the same.

Forming SHGs at the village level was more a routine exercise. But generating and sustaining self-employment remained a challenge for the women who lacked access to markets. The women were hesitant to form SHGs, as suggested at the zilla parishad meeting. 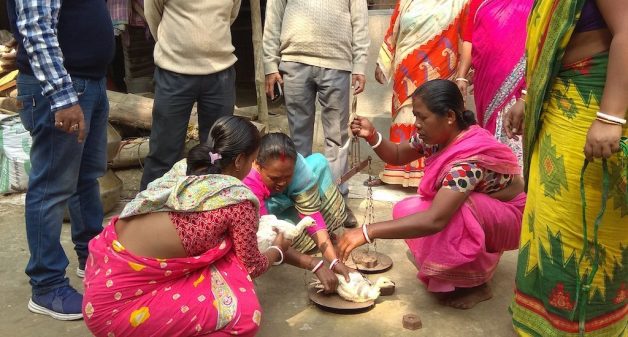 Like all other villages in Bonhooghly 2 gram panchayat, the main employment in Balarampur was agriculture. The women who were engaged in other works constituted a small percentage. Married more than 25 years ago, Mamata Nadu was a typical homemaker in Balarampur.

Overcoming their reluctance, Nadu and the other women of Balarampur and Nona Joykrishnapur villages held discussions for many months and formed an SHG by the end of 2014. Seven groups were formed, with each member willing to save Rs 50 per month.

They selected the usual employment avenues — sewing, beautician training, vegetable growing and fish cultivation. They did not think of backyard animal husbandry as a potential source of income, mainly because of the training involved and their lack of access to markets.

The women faced hurdles along the way. There were political interferences locally. Three of the groups broke away. “Though we held meetings regularly, we did not have sources of personal income, and we were anxious for gainful employment,” Sujata Mondal of Pushpa SHG told VillageSquare.in.

They had bought one sewing machine for each SHG, but could not secure orders. “We didn’t succeed in trying other employment avenues and we were disheartened,” said Nadu. The women had opened a bank account and had been depositing money for two years, not knowing that banks can offer loan facilities only to SHGs within a 25 km radius.

Bidhan Kar, secretary of West Bengal Human Development Society (WBHDS), an NGO engaged in welfare work in South 24 Parganas district and which helps SHGs in bank linkage, helped the women open an account in a bank closer to them, at Narendrapur, in the southern part of Kolkata. With a good savings record, the SHGs started getting loans immediately.

“For nearly a year, we were lending money among group members, but we didn’t get any entrepreneurial opportunity,” Nadu told VillageSquare.in. “After requesting the bank manager continuously, he connected us with Sasya Shyamala Krishi Vigyan Kendra (KVK), to learn scientific rearing of poultry, turkey in particular, in our backyards.” 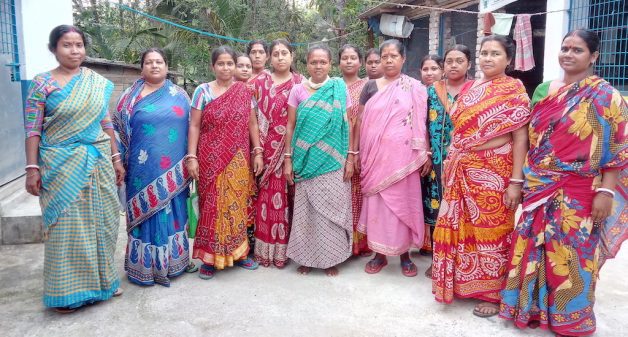 In December 2017, KVK assessed the SHGs’ potential and vaccinated the poultry of the entire village to nullify any chances of virus attacks on the turkey. The women followed the vaccination schedule diligently, thus minimizing mortality. “We are grateful to IDBI Bank manager Dr Subhakirti Saha, for showing us a quick and effective income generation avenue,” Pratima Kayal of Ma Tara SHG told VillageSquare.in.

The women brought down rearing cost by growing azolla, an aquatic fern rich in proteins, vitamins and minerals, used as feed. The women also got market linkage between KVK and West Bengal Livestock Development Corporation (LDC), under government’s Department of Animal Husbandry.

LDC helped the women by selling the produce through its counter at the Tollygunje poultry farm. Since December 2017, the women have carried out two rounds of rearing. Fully grown birds weigh between 6.5 kg and 8 kg and fetch a price of Rs 250 a kg, sometimes even higher.

Sarbaswarup Ghosh, the subject matter specialist in animal husbandry for Sasya Shyamala Krishi Vigyan Kendra said that the women had not only absorbed the training but had understood the importance of keeping records as well, which would help them in the long run.

“We treat their rearing units as Frontline Demonstration Units, as an example for others,” Ghosh told VillageSquare.in. “They have shown tenacity in their entrepreneurial effort. We want to support them continuously.” KVK indeed gave the women Indian Brown egg-laying poultry, that have started laying eggs.

Loan amounts for group members range from Rs 500 to Rs 20,000, depending on their needs. They maintain accounts meticulously. Given the fact that the average education level of the women is 7th standard, their bookkeeping is impressive. Their transparency is such, that finances are explained to those who are less adept with numbers.

Loan repayments to IDBI Bank, where SHGs are allowed up to three years, attract an interest of 7%. However, these groups have always repaid in less than a year, and the interest rate has worked out to 0.9%.

One of the indicators of the women’s success is that, men who discouraged their women initially, now offer help when possible, encouraging them to supplement household income.

The success story of these SHGs has spurred formation of many groups, who seek the support of Nadu. Chandramallika, a new group, has already become a part, waiting for the next cycle of work to begin. The women plan to rear the complete range of poultry and market animal husbandry products.

“SHGs, in order to survive, need to have the right kind of mental framework. In my experience, cohesion in any group is not easy, but when it is possible, entrepreneurial success is usually not far away, and Nadu and the groups are a notable example of this,” Kar told VillageSquare.in.