Nursing the underserved to health in rural Rajasthan

Migrant children get a shot at continuing education

A scheme by the Odisha government has enabled children of migrant workers to continue their education at destination sites, preventing child labor and ensuring continuity in education Laxmi’s parents migrated last autumn, after celebrating the local harvest festival Nuakhai. Like other seasonal migrant workers of Odisha’s western districts, they migrated from their village to work in a brick kiln. It was the first time that 9-year-old Laxmi was moving from her village to a completely new place.

Laxmi’s parents Mukesh and Ahalya Bag hail from Maharpalli village under Loisinga administrative block in Bolangir district. They migrated so that they could repay a loan they had taken to meet their financial needs, with the money earned at brick kilns. The money would also help them sustain themselves for some months.

They could not leave the children alone in the village, as almost the entire village migrates. Though Laxmi was then studying in Class 4 in their village, she had to join her parents to help them at the kiln, and with domestic chores, in addition to taking care of her 3-year-old brother. When Laxmi’s parents migrated to Balianta, they knew she would miss school, though they understood the importance of education.

However, guidelines made by the state government enable migrant workers’ children, deprived of education, to join schools at the destination sites, giving them a chance to study with other students in schools; Laxmi is one of them.

Although Indian law is against child labor, in this part of the country, a child is as important as an adult worker in brick kilns, because the child is part of a work unit called pathuria that constitutes three members of a family.

Daya Sagar Pradhan, an activist working on distress migration issues in Bolangir cited two reasons for families to take their children along. “First there is no one except the old and the infirm at source villages, and the second reason is that children are part of a pathuria unit since long,” Pradhan told VillageSquare.in.

Thus, child workers are crucial to the brick kiln labor market. According to Pradhan, kiln owners find the children’s small hands good for piling mud and flipping bricks for drying. “The labor contractor also prefers children and agrees to pay an advance if the unit consists of a child or two,” he said.

According to an assessment of Migration Information and Resource Center, Aide et Action, children constitute 35% of migrants, out of which 13% are below six years and 22% are between ages six and 14. So a large number of children migrating with parents are being excluded from their basic rights like education, healthcare and safety. 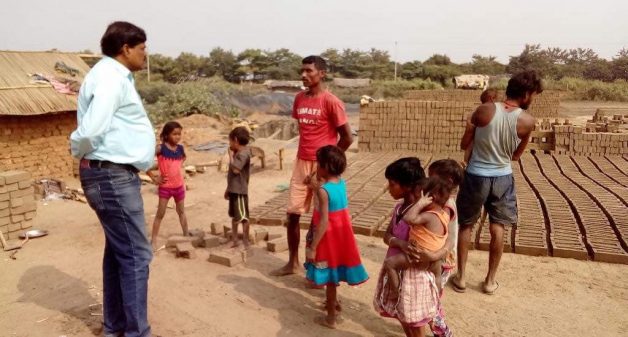 From traveling in unreserved train compartments to working in exploitative conditions, the children face many risks. “There are incidences of children facing abuse at worksites and girls exposed to physical and sexual abuse,” said Pradhan. They are deprived of government schemes like immunization through the Indradhanush program, nutritious food at anganwadi (daycare centers), and mid-day meals at schools.

From the drought-prone districts of Odisha, families go to Andhra Pradesh, Tamil Nadu and Telangana, and to kilns on the outskirts of Bhubaneswar. It is a common sight at kilns to see many children of different age groups engaged in making bricks, and toddlers playing under the scorching heat.

Sometimes, children are provided with escorts and transport facilities, as the brick kilns are located far from the schools. “We started enrolling children of migrant workers in Balianta block in 2012 and every year the number increases,” said Barik.

Bhubanpur Project Upper Primary School, which has been enrolling migrant children since 2013, enrolled 51 students this year. “Once they reach the brick kilns, we visit and counsel the parents. Since they do not have time to come and enroll their children, the school has to reach out,” Babuli Khatua, headmaster, Bhubanpur Project UP School, told VillageSquare.in.

The major challenges the schools face is, accommodating the migrant children with other students by improving the learning ability and conduct of the former. “We see a lot of changes in the learning outcome and attitude of these migrant children once they attend school regularly,” said Rajalaxmi Mohapatra, Laxmi’s class teacher.

The school has even provided a room where they can groom themselves by using oil, soaps, comb and talcum powder before coming to class. “We teach them regularly about hygiene and cleanliness,” Mohapatra told VillageSquare.in. 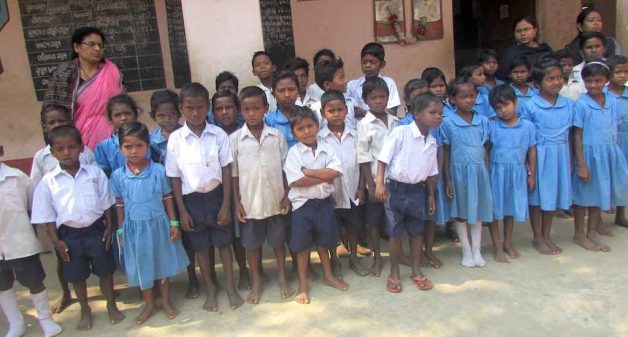 In addition to education, the children get nutritious food. “The food at school is tastier than what we eat at home,” said Laxmi. On Sundays and holidays, she does not get nutritious food, as at home they take broken rice, onion and locally made pickle.

Some parents return to their villages when their work ends. Many parents working in Balianta’s kilns stay on so that their children can continue their education. Parents of Ajay Jena (11), have settled in a village near the destination site when they found their son doing good in studies.

After the examinations, the school authorities submit transfer certificates of all the migrant children to Sarva Shiksha Abhiyan (SSA). As per government order, the department directs the source district’s school administration to re-enroll these children in their respective schools.

“It is important to re-enroll them in their village schools as the seasonal migration starts around October-November. Till then the migrant children can continue their education at village schools,” said Saroj Barik of Aide et Action.

Another major challenge is that migrant parents do not travel to the same destination and so children have to cope with a new school, new teacher and new environment. Pradhan said that it has an impact on child psychology sometimes. “But with regular counseling parents now seek kilns where their children can get these opportunities,” he said.

“Access to basic entitlements is a fundamental right of the vulnerable people and children and we feel the same should not be denied to workers when they migrate for livelihood,” Umi Daniel, Director – Migration & Education, Aide et Action, South Asia, told VillageSquare.in.

Childcare and Learning Centers at work sites engage children between ages three and six in pre-school activities. Children of this age group are deprived of government-run Integrated Child Development Services (ICDS) and immunization program. So, children of brick kiln sites re vulnerable to health-related issues due to malnutrition.

“At worksites, when parents engage in brick making for hours, the little ones sleep or play nearby, they don’t get proper nourishment. At Childcare and Learning Centers, our focus is ensuring a child’s overall development,” said Barik.

If the kiln is near an anganwadi, the children get cooked food, not otherwise. To improve their nutritional status, migrant children and pregnant mothers need access to cooked food at worksites. There are 47 brick kilns in and around Balianta and the civil society organization works with 12 kilns. Eight are now self-sustainable and the organization provides only technical support to run the worksite childcare centers.

The kiln owners and contractors are also encouraged not to involve children in brick making and declare their kilns as child labor-free worksites. Despite strict guideline from the state government, only a few brick kiln owners follow it. There are many more migrant children who need to be enrolled in schools.

Rakhi Ghosh is a Bhubaneswar-based journalist. Views are personal. She won the PII – ICRC first prize in 2018 for her story on safe drinking water published in VillageSquare.in.