Biodegradable pens filled with seeds provide a viable livelihood to Kerala’s physically challenged people. While offering an ecofriendly alternative to plastic pens, these seed pens sprout plants after use 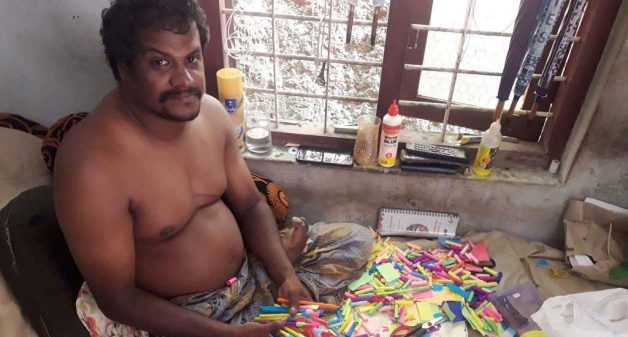 “My pen replaces plastic and sprouts plants across my village,” said S. V. Ajikumar of Poovachal village in Thiruvananthapuram district, who has been confined to a wheelchair after an accident. “It also provides a livelihood to many physically challenged people like me.”

As elsewhere in Kerala, Poovachal also bears the extreme heat of summer. Many farmers have given up vegetable cultivation due to acute water shortage. But near the entrance to Ajikumar’s house is a cowpea vine, which he attributes to a seed pen.

“This cowpea plant grew out of one of the seed pens I made,” Ajikumar told VillageSquare.in. An alternate to plastic pens, seed pens are not only doing away with non-biodegradable plastic waste, but are also supporting the livelihood of many villagers, especially the physically challenged.

The seed pens are made of paper, the core filled with seeds of cowpea, spinach, okra, etc. “Seeds inside the paper tubes become plants bearing vegetables, after the pen is used,” said Ajikumar. “Unlike plastic tubes, paper tubes would decompose, and so the seed pens prevent plastic waste and plastic pollution.”

N. M. Shaji, a farmer in Wayanad, and winner of National Plant Genome Savior Award, Pure Living, an organization run by Lakshmi Menon for livelihood issues, and Kalpetta Service Cooperative Bank are some of the agencies promoting seed pens. Though no one is sure where and how the seed pens originated, they are promoting the pens to uplift the physically challenged, especially those living in villages. 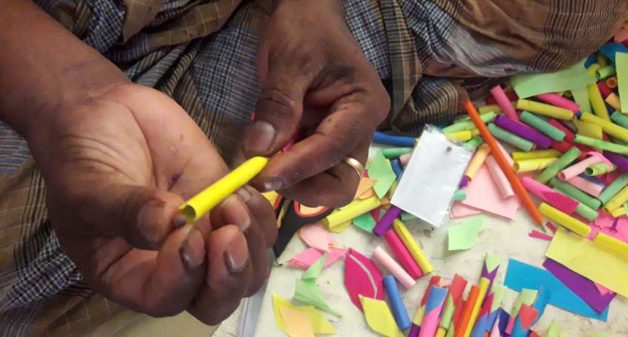 Once used, the pen tube made of paper decomposes and the seeds sprout (Photo by K. Rajendran)

Sadhasivan Nair, a physician from Bengaluru, who had come to place an order for 5,000 seed pens with A. Vijayan finds the pens soft and easy to use compared to the plastic ones. “I plan to distribute seed pens during the ensuing workshops and conference of Common Cause, a non-governmental organization that I run,” he told VillageSquare.in.

According to Disability Census 2015, conducted by Kerala Social Welfare Department, the state consists of 7,91,998 people with disabilities, which is 2.2% of the total population. Of this, 75% are physically challenged and more than 80% live in villages.

Many of them commute to nearby cities every day, to take up odd jobs and earn. Some used to seek alms. There have been accidents and heat-related problems involving this group of daily migrants. “Making seed pens is the best job opportunity for us, since there is no need to commute,” said Ajikumar.

It takes Vijayan four minutes to make a seed pen, each priced between Rs 10 and Rs 15. Till a year ago he moved about Palakkad in his wheel chair selling lottery tickets. Now his small house in Kannapur village hosts a cottage industry making colorful seed pens. While he had to plead with the public to buy lottery tickets earlier, now customers seek him to place orders.

Ajikumar, who used to earn Rs 5,000 a month as a cable TV operator, stopped working 15 years ago when he had a fall while on duty. “Believe it or not today I can live solely making seed pens,” he said. He said that the work is seasonal and he can earn an average of Rs 15,000 a month. 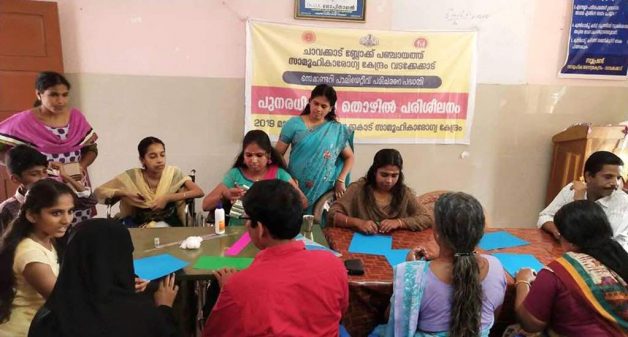 Kora, who used to earn Rs 3,000 a month selling lottery tickets, and who is confined to bed now, said that he earns more than Rs 15,000 every month making seed pens. He said that he can make more. “I have to make more and earn more as my daughter’s wedding is coming up.”

During the past year, seed pens have been used in many conferences and workshops conducted by political parties, non-governmental organizations and trade unions. Though these agencies used seed pens as a tool to promote themselves as environmentally conscious, those who make the pens are happy, since they are able to earn more by making an ecofriendly product.

Some like Ali, a physically challenged person in Palakkad who started making seed pens recently, are skeptical. “How can we fight multinational pen manufacturers who pour a lot of money into advertisements to attract consumers?” he said. But most of them are optimistic about the sustainability of their work. “Branded pens are for making profit, whereas seed pens offer livelihood,” they said.

The government is also supportive of the initiative. “We do actively promote seed pens through Bhoomitra Sena Clubs (Eco clubs) active in 354 higher secondary schools and the student community is well aware,” John C Mathew, director of the government’s environment department, told VillageSquare.in.

K. Rajendran is a journalist based in Kerala. Views are personal.