How to revitalize agriculture in India

Coffee planters in Kodagu are still suffering from the effects of incessant rainfall and landslides of August 2018 that resulted in loss of topsoil, crops and yield. Growers are now seeking better reservoir management 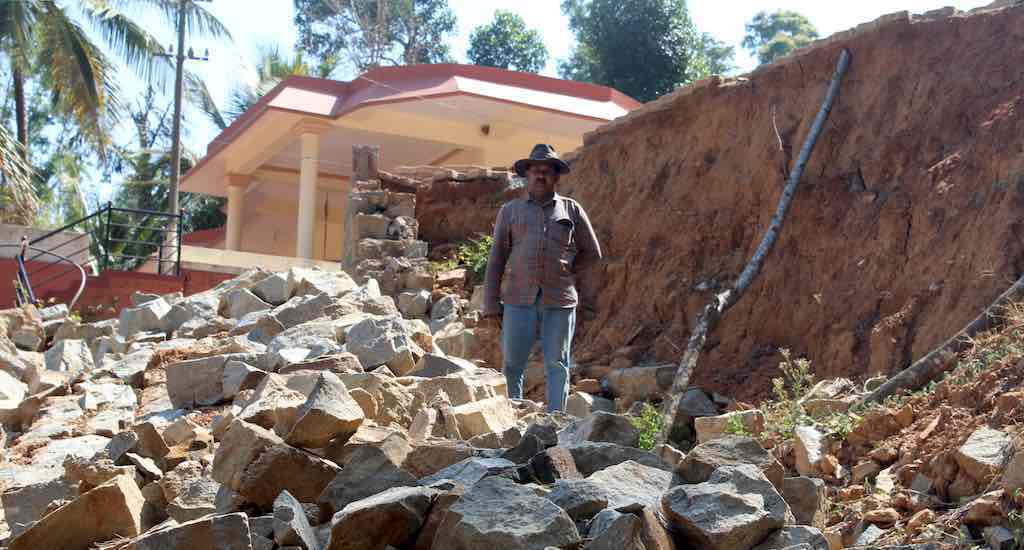 Subbaiah Shanteyenda (58) was busy restoring the site of a landslip, right next to his house perched on the slopes where he grows coffee, pepper and cardamom. In August 2018, his family survived the worst deluge of their lifetime.

Heavy downpour that started in mid-August last year wreaked havoc in Mukkodulu village of Madikeri taluk, where Shanteyenda’s family owns around 40 acres of coffee plantation. A landslide destroyed close to 10 acres of productive agricultural land in his estate.

The Kodagu or Coorg region, known for its coffee, bore the brunt of an extreme weather event, where most of the coffee plantations were affected. Eight months later, coffee growers like Shanteyenda are struggling to cope with the drastic drop in coffee yield, besides loss of land and crucial shade-giving trees.

In three days, from 15 to 17 August, Kodagu received a rainfall of 768mm, which was 45% of the entire month’s rainfall. “That was the highest recorded rainfall since British era,” K. K. Vishwanath, core committee member of Codagu Planters’ Association (CPA) and organizing secretary of Karnataka Growers’ Federation (KGF), told VillageSquare.in.

“It just did not stop pouring and the locals realized that it was not normal,” said 71-year-old N. Bose Mandanna, former vice-chairman of the Coffee Board of India. On 17th August, a stream of gushing water from the upper inclines of Shanteyenda’s house destroyed a high wall and washed off his nursery of coffee seedlings. Shanteyenda’s wife Reshma recollected walking for miles to reach safety, after the wall gave way.

As a result of the extreme downpour, many coffee growers in Kodagu witnessed wet foot conditions in their plantations, with water stagnating around the plants. This resulted in berries dropping down and incidences of black rot and stalk rot. “Continuous water logging led to oxygen starvation to the coffee roots,” said Mandanna. 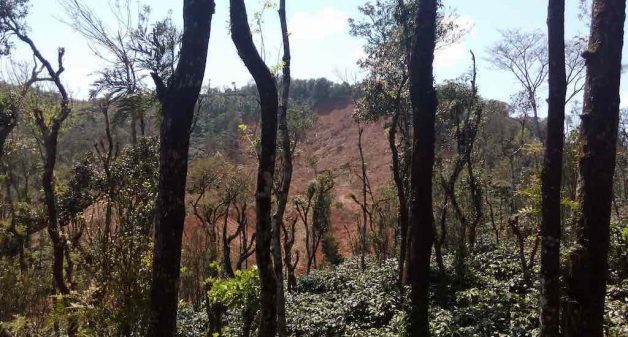 According to Shanteyenda, the water retaining capacity of the soil was completely lost. “I could see some of the coffee roots at the ground level,” he told VillageSquare.in. “And the yellowish tinge on some coffee plants means they are not healthy.”

Karnataka accounts for over 70% of the coffee produced in the country; of which, more than 53% is produced in Kodagu, nicknamed the ‘coffee cup’ of India. However, following the torrential rains that severely affected the district in August 2018, Karnataka recorded a significant reduction in coffee production.

Among the major losses in the state, about 25,020 metric tons (Arabica 4,750 MT and Robusta 20,270 MT) was reported from Kodagu, followed by Chikkamagaluru and Hassan districts, as per statistics released by the Coffee Board of India.

“Due to the rains, the leaves and berries started dropping. The severe winds made it worse,” Mandanna, whose coffee estate was at the fringe of a landslide spot, told VillageSquare.in. “There were springs everywhere and I could save only 50 to 60% of my crop.”

52-year-old Petu Kariappa, also a committee member of the CPA, lost six acres of his coffee estate near Madapur to landslides. After the rains, the yields were only 25% of Robusta and 45% of Arabica compared to last year. “I produced over 850 bags (of 50 kg each) of Robusta coffee last year. But this year, I may not even cross 200,” he said.

In Kodagu, coffee is mostly cultivated under a canopy of assorted shade-giving trees such as rose wood, wild fig, jackfruit, etc. The landslides have uprooted these trees in many coffee plantations. “It feels like we have gone back 15 years,” Reshma Shanteyenda told VillageSquare.in.

Many shade trees, including both hard and soft wood, fell to the ground when landslides ravaged Kariappa’s coffee estate. “In fact many farmers approached the Principal Conservator of Forests seeking permission to sell the fallen trees at distressed prices. But the forest department rejected our appeal,” he said. 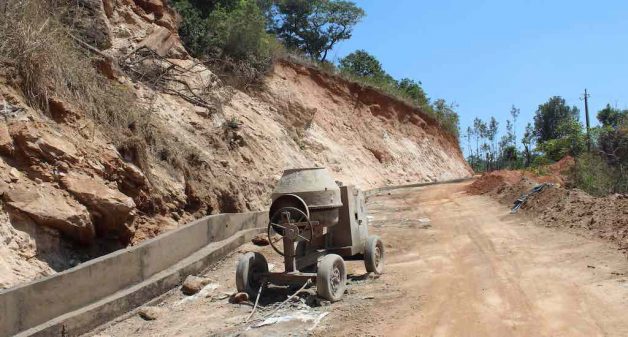 The August 2018 floods and landslides destroyed more than 30% crops in Somwarpet and Madikeri taluks. Though compensations were announced, its reach has been uneven according to many coffee growers. “It may be less;, but monetary compensation of Rs.18,000 per hectare for crop loss and Rs. 37,500 per hectare for land loss was offered through the National Disaster Relief Fund (NDRF),” said Kariappa.

“Though the money has been released, it’s taking abnormally long for it to reach the affected people,” he said. Officials in charge of dispensing the compensation cited the Model Code of Conduct (MCC) that was in place for the recently-concluded Lok Sabha elections as a reason for the delay.

Shanteyenda alleges that there has been misuse of funds granted by both the state and central governments. “It’s just 2% of Kodagu which was severely impacted, but those who were not affected also claim compensation,” he said. “There is little coordination between the state and central governments in delivering disaster relief,” A. Nanda Belliappa, secretary of the CPA, told VillageSquare.in.

“In a recent meeting involving the Coffee Board officials and members of the CPA, it was decided that almost nothing can be done this year as the topsoil has been completely washed off, even up to 50 feet in some places,” said Mandanna.

Petu Kariappa has just started leveling the land. Shanteyenda is unsure how to proceed with the restoration work. “The land lost is almost a vertical drop, with no natural incline left whatsoever. I am not sure how I can fix it,” he said. He considers planting shade trees and legumes for the long run.

In addition to their existing worries, many coffee growers are facing water shortage for irrigation. “When the rains lasted till September 2018, we thought there would be abundant water for this year. But right now, we are witnessing one of the worst periods of water scarcity,” said Mandanna. “By November, young coffee and pepper plants started wilting and dying impacting this year’s yield also.”

A few estate owners like Mandanna and Nanda Belliappa believe that proper management of the Harangi reservoir in Somwarpet taluk (the gates of which were opened on 17th August, 2018 amplifying the flood situation) could have resulted in lesser losses.

They believe heavy discharge of water into downstream channels, some of which were running parallel to the roads led to massive landslides, scooping the area in the adjoining hills of Madikeri taluk. CPA, in association with KGF, has appealed to the state and central governments several times, to implement several measures to alleviate the problems facing the coffee sector.

Some of the immediate, short-term actions include providing loan waivers to coffee farmers in all the 43 affected villages of Kodagu, Hassan and Chikkamagaluru, desilting of water bodies in the catchment areas situated on the backwaters of Harangi reservoir, and better dam maintenance and management.

In some places, the landslides have also erased boundaries demarcating different coffee estates. A government report that assessed the damages identified close to 300 landslide locations and estimated the land loss in affected villages to be ranging from 1 to 250 hectares.

However, a physical verification of individual properties to assess and arrive at losses including land cost, infrastructure, tree valuation and horticulture activity, is yet to be initiated. “We have requested the government to depute surveyors to take up this work on a priority basis,” Vishwanath told VillageSquare.in.

Many coffee growers said that it would take at least ten years for Kodagu to return to normalcy, since the perennial crop of coffee involves a maturity period (from planting to producing berries) of about 10 years.