The Rabha people in Assam have taken to cultivating pepper in their homesteads to discourage elephants from ravaging paddy fields, and to also earn a neat income in the bargain 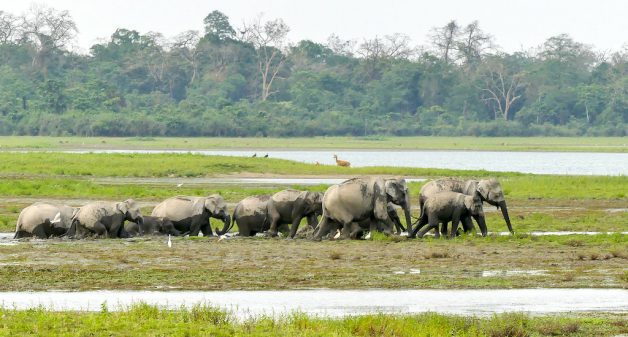 People belonging to the Rabha tribe inhabit 68 villages in Sayani Bardwar administrative block of Kamrup Rural district in Assam. Rabhas also live in blocks lying further west parallel to Brahmaputra River in Kamrup as well as in Goalpara district and further south in the hills of Meghalaya.

The Rabhas of these 68 villages live just at the foothills of East Khasi Hills. Large alluvial plains extend from the hills down to the Brahmaputra, which flows westwards some 32 km north of these hills. Rainwater gushes to the plains from these hills, causing extensive waterlogging for 5-6 months starting May through October. Naturally, paddy is cultivated extensively and the huge expanse of greens makes you feel that the Rabhas must be very prosperous.

But appearances can be deceptive. The Rabhas would have been prosperous but for the elephants, which descend from the hills in the dry season when paddy is due to be harvested. As one villager rues, “They come in large herds of 50-60 members. No one can stop them. We lose much of our paddy and must try and collect such little grain as has been left behind by these rampaging animals.”

Rabhas do not get any compensation either, for the human-elephant conflict: they simply are not meant to be there! These lands are either classified as forest or were leased to a nearby tea plantation, and Rabhas live on the so-called encroached lands. But they have been here for at least three generations, if not longer. Some of them have papers related to fines charged on them in the forties and the fifties!

However, hunger does not recognize legal entitlements. If elephants eat their paddy, forests have vanished completely from the plains and the tea estate has ceased to be, how would the Rabhas survive? Guided by Martin Rabha, CEO of Diya Foundation, which works with the Rabhas, I travelled through some Rabha villages and was struck by the extensive homesteads that households seem to have.

Homesteads are fenced with split bamboo sticks held together by iron wire and covered with the local castor plants. They are completely useless to keep the elephants out, but are enough to declare the occupation by the householder. Homesteads have tended to be overrun by all manners of luxuriant growth.

Rabhas rear small poultry, goats, pigs and some very diminutive cattle. The homesteads have several large trees. You see many fruit trees — kardoi (star fruit), banana, kathal (jackfruit), litchi, mango, a local fruit called littuk, and of course, the ever present arecanut so necessary for their tambul culture. Most of what grows is for self-consumption.

For a city dweller, the Rabha homes are a dream sight, a pretty looking simple thatched structure nested in emerald green vegetation. But living here needs courage and endurance. Both the staple food and cash are in short supply and hence men and women appear thin and under-nourished.

The gajaraj does not spare the homesteads either. Motin of Zarapatta , whose homestead I visited, narrated the nocturnal visit of the majestic animals. He had the elephantine visit the previous night. He showed me from where the mammoths entered, easily trampling the fence. The elephants had come in a pair. “They were very big,” Motin said. They wanted ripening banana to supplement their meal of the trunks of the 20 feet tall local banana plants.

So in her direct fashion, the simple minded animal brought the plant down, ate what she wanted and retired into private life, trampling a few new arecanut plant as well. “I am glad there was nothing the elephant liked in the poly house I have made for the pepper nursery,” Motin said. The reason: his investment would have been literally torn asunder.

A solution to help Rabhas live with the elephants appears to have been found. As Lewis Carroll says in Alice in Wonderland, “throw black pepper in their face”, but of course Rabhas cannot hit the elephants when they sneeze! What they did was to learn and plant pepper saplings to climb on the arecanut trees and also plant Assam lemon in between the trees. “Kathal and banana sort of invite elephants to the homestead, but the thorns of lemon discourage them and of course they do not eat pepper,” said Martin.

The economics of the exercise is not bad. Each pepper plant, after it reaches maturity can yield about 8-10 kg raw pepper. This fetches a price of Rs 350-400 per kilo. In a large homestead, a Rabha may have as many as 40-50 arecanut trees. Thus he may get an income of over Rs 1.5 lakh from pepper alone.

Many Rabhas have learnt the value of pepper now and many more want to do the same. So the early pepper planters like Motin have started nurseries of pepper plant in which they grow 1,000-2,000 saplings, each of which can fetch Rs 12 from a buyer. Since the ecology is so rich here, they gradually will start introducing elephant-neutral crops such as vegetables like bitter gourd, chilies, ridge gourd, bottle gourd, etc. Each of these will have substantial income effect on their currently meager economies and hopefully Rabhas will prosper.

The tuskers could change their diet preferences and decide that a meal of paddy, banana and jackfruit needs a bit of peppering! Or more likely, the forest department may suddenly discover that their working plans require new plantation of an exotic sal variety and hence Rabhas need to be moved.

But at the moment, it appears that pepper will help the Rabhas live within a whisker of the tusker.