Madur, the traditional woven reed mats of Bengal that saw a decline in use in recent times, have been revived by artisanal weavers with support from social enterprises and the state government 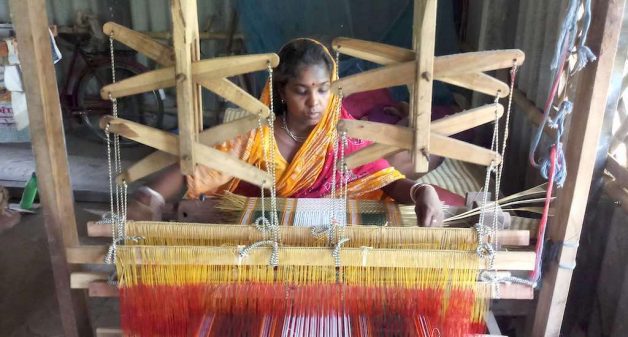 Madur artisans, most of whom are women, use a loom or a bamboo frame to weave the mats (Photo by Gurvinder Singh)

The traditional madur mat was a permanent fixture in a Bengali household till a few years ago. The word madur is a generic term for floor mats in Bengal.

The mats are woven from reeds or madurkathi (mat sticks), of a rhizome plant found abundantly in the alluvial tracks of East and West Medinipur districts. The climate and land in the two districts are suitable for the reeds that grow between April and July as well as between September and November.

The artisans who weave the mats lived in poverty and hardly had means to arrange for three square meals a day till a decade ago. With the revival of mats and product diversification, enabled by the state government and social enterprises, the mat weavers are witnessing a reversal of financial position and recognition for their work.

Old-timers said that the origin of madur craft in West Bengal dates back to the Muslim period when masland (also known as mataranchi) mats of superfine quality with fine cotton were produced under royal patronage.

“We have heard from our ancestors that mats were collected as revenue under the Jaigirdari system, a form of land tenancy developed in India during the time of Muslim rule,” Nishikanta Das, a sexagenarian craftsman, told VillageSquare.in. “In 1744 Alivardi Khan, Nawab of Bengal, issued a charter to the Jaigirdars making it obligatory to supply mats for use in the collectorate.”

Around 4,500 artisans are involved in the craft of mat weaving in Narayangarh, Bhagwanpur, Potashpur, Ramnagar, Contai and Moyna administrative blocks spread across the two districts. Over 70% of the artisans are women.

Sharta, a non-descript village in Sabang block of West Medinipur, is considered the hub of madur artisans. Over 450 families are involved in the work. Sabang also serves as a wholesale market for the madur sticks. 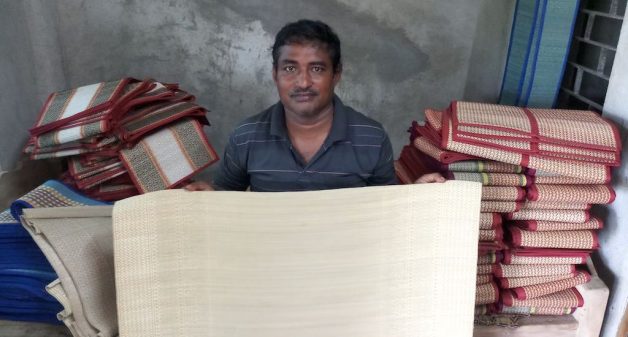 Alak Kumar Jana, an award-winning craftsman, with one of the fine quality masland mat he has woven (Photo by Gurvinder Singh)

It proudly hosts seven artisans who have travelled abroad and have earned kudos for their products. There are also three national awardees in the village.

The artisans have moved beyond mats by diversifying into different items that can be made from the mat sticks. “We have been weaving mats for generations as our ancestors were involved in the same profession,” said Alak Kumar Jana, a national award winning craftsman and the first to visit Harare in Zimbabwe to attend an exhibition and workshop on rural craft in 2013.

“We used to carry the mats on our heads and sold them in a local market after covering a distance of 8 or 9 km on foot,” Alak Kumar Jana, told VillageSquare.in. “The income was limited as village markets didn’t fetch enough money to run our livelihood. Somehow we survived.”

According to Gouri Bala Das, the artisans now make table mats, carry bags, hats and spectacle cases among others, in various attractive colors. “Though looms are used for making diverse items, artisans still use a bamboo frame to make the ordinary and even masland mats where the sticks are made finer. The popular designs on the masland mats are flowers and honey combs,” said Das.

“The price of an ordinary mat made of jute ropes and thick madur sticks are usually around Rs 150, while masland mat can be priced as high as around Rs 1.5 lakh and weigh just 200-250 grams,” Gouri Bala Das told VillageSquare.in.

The journey of the artisans and their mats from anonymity to stardom began in 2011 when the new government came to power in Bengal. Artisans said that the government paid extensive attention to promoting rural craft in the state and increased the number of fairs for handloom products.

“The fairs created new markets for us as we could reach customers with diversified products that were no longer limited to madurs. The government also become our customer through Biswa Bangla stalls meant for handicrafts. It gave us more spotlight and publicity,” Mithu Rani Jana, who visited Denmark in 2017 for an exhibition and workshop, told VillageSquare.in. 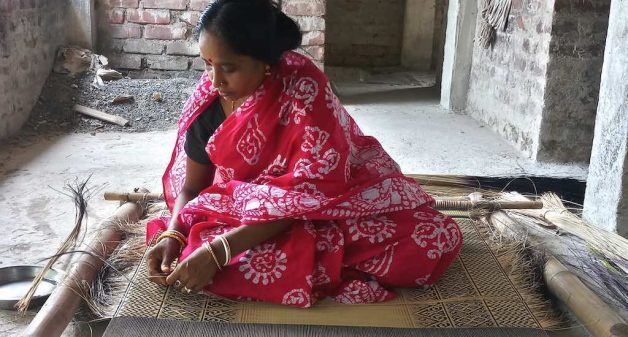 In 2015, Bangla Natak, a social enterprise working for rural folk artisans, was roped in to oversee the project in Sabang, Pingla and Narayangarh blocks of Medinipur. “We have helped them establish direct contact with the market and they are now empowered to take their journey forward,” said said Amitava Bhattacharya, founder of Bangla Natak

“The challenge is to expand the base and make Sabang a global destination for international travellers to experience the madur weaving,” Bhattacharya told VillageSquare.in. In 2018, the government got the craft a GI tag.

“We have buyers who export our products to foreign countries; but we are still unable to send the goods directly because of linkage issue,” Akhil Jana, who does a turnover of around Rs 40 lakhs every year, told VillageSquare.in.

The Micro, Small & Medium Enterprises (MSME) department of West Bengal plays an active role in promoting the craft. “We have built nine common facility centers for the artisans where they can do collective work in case of bulk orders,” said Biswajit Sarkar, planning and evolution officer, Khadi and Village Industry Board under MSME.

“We are also in the process of building guest rooms for tourists where they can get first-hand knowledge about the craft. We are also making small museums where the products would be showcased. We have also provided them looms to weave diverse products,” Sarkar told VillageSquare.in.