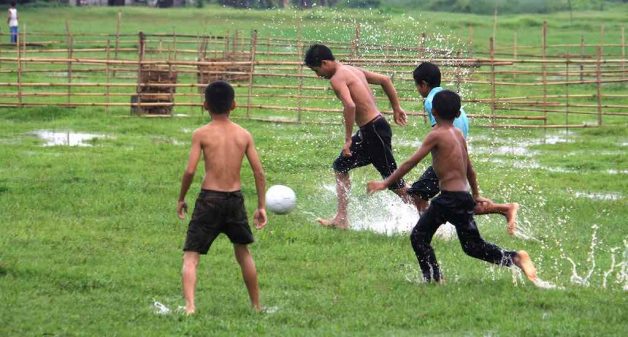 A group of tribal boys playing football (Photo by Flickr)

Arjun Munda, the then Chief Minister of Jharkhand, introduced measures to select and train tribal youth from that state to become pilots. The dominance of the youth from Oraon tribe in the field of hockey is celebrated. We sing accolades to Bhaichung Bhutia, the footballer. Recently, the government of Maharashtra trained tribal youth in mountaineering, sent a team to Mount Everest and celebrated those who successfully climbed the mountain.

Numerous such efforts are made by state agencies and NGOs to identify and nurture talent from tribal youth, provide opportunities to them, and celebrate them when they demonstrate proficiency. Munda’s logic then and possibly the logic of all actors undertaking these measures is that such measures build up the self-perception, and hence, the confidence of people belonging to underprivileged sections of society and this in turn contributes to their partaking their due in the mainstream.

The question is: what is the canvas of reality of tribal or Dalit people? Do such steps to nurture special talent among them make sense? What is the role of measures specifically directed at enhancing the self-perception of people belonging to these communities? Are such measures necessary at all? Whom do they help? Should the state take the trouble and make investments in them? Do they help build the self-perception of these communities and bolster their identity or do they reinforce the muted and condescending paternalism?

In umpteen interactions with tribal men and women of these communities, I have heard their highly self-deprecating statements about their inability to undertake or initiate a particular activity. On numerous occasions, I have also observed similar diffident, insecure and self-doubting facial expressions and heard statements indicating a self-perceived inferiority among boys and girls from Dalit communities.

There is no doubt that this is encouraged by or finds its reflection in condescending and patronizing behavior from their so-called social superiors. I was raised in a high caste family of modest means and in a small town. Consequently, I formed rather modest self-perception about myself and experienced not only patronizing chafing but also aggressive and assertive contempt from those who were raised in metro cities and in families that were well placed. I have found it difficult to shake off the images of such episodes that occurred decades ago. Therefore, I am acutely aware of the social psychology of those born in less endowed situations and so-called low status families.

The average individual belonging to tribes, at least the central Indian tribes of Bhil, Gond and Santhal ethnos, as well as the average individual belonging to Dalit communities lives with an acute sense of self-perceived inadequacy and inferiority. This self-perception affects his aspirations, his sense of what his destiny can be and to what heights he could rise. I deliberately use the male pronoun here since in my observation – and I do hope I am wrong – most women from these communities seem to have resigned fatalistically to subservient reproductive roles.

This in turn seems to perpetuate his relatively subordinate status in society. Occasionally, and usually much publicized and politicized, of course, there is the strident rebellious note of assertion of equality – “we are no less” – but these notes are numerically small and confined to the elite among these communities.

There is a school of thought that instead of wasting money on creating such opportunities which, when tapped by people of these communities, would contribute to enhancement of their and hence the communities’ self-esteem, it is better to just keep doing the basics right.

Have more primary schools, ensure that children are fed better, build hostels and give scholarships. In fact, those advocating such positions deride the point of view that promotes creation of opportunities of excellence. For them, inclusion of all is the supreme value, and if that means we include all but only for a basic or mediocre level, that should be good enough.

I am not sure if there is necessarily a conflict between the two points of views. A large mass of barely literate, hopelessly mediocre population is destined to remain in a low level of existence. The exclusively inclusive agenda of the Left Front government in West Bengal for 30 years proves this point abundantly. A state that led the nation in the industrial world has now become a millstone of heavy burden around the nation’s neck.

While the state has to create sufficient amenities for basic level of development, that alone does not suffice. Imagination of individuals has to be fired. Aspirations have to be ignited. Individual effort has to be goaded and encouraged. For doing all this, contemporary role models are needed.

While Birsa Munda is a great exemplar, his time was a long ago. Bhimrao Ramji Ambedkar died half a century back. Holding these individuals as role models, while great as a guiding star, does not have too much practical value for igniting aspirations. Lay individuals cannot touch or feel them, cannot relate to them at personal level. They will always persuade themselves that the ethos in which these bygone heroes lived, grew and worked was very different from the current ethos.

For the latter, contemporary role models in diverse fields would help. These can come about only by enabling a relatively few persons form these communities to do extraordinary things such as climbing Mount Everest. For nudging individual ambition and aspirations, current heroes are a must and the state must help create them.

I would strongly vote for creation of special breeding hubs for children of these communities who show talent and have a fire in their belly. Such incubation centers, to use a more current term, need to be in as many fields as resources permit. Efforts do need to be made to spot and promote talent among tribal and Dalit boys and girls, nurture it especially even at large expense and build them as heroes. Only then will the self-perception and identity of these communities will get a much-needed boost.