A collaborative initiative in Maharashtra boosts the physical and mental well-being of senior citizens living in rural areas, while also providing a platform for interaction and improving positivity 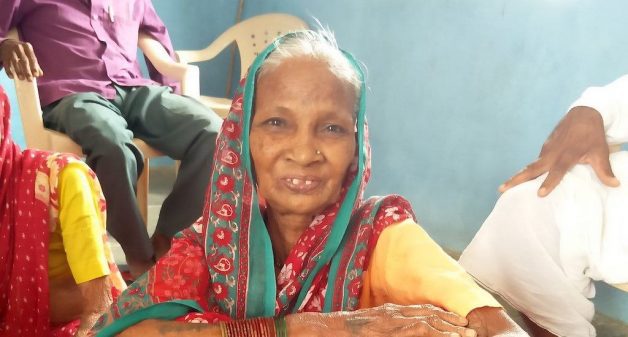 A community-based public-private initiative that caters to the needs of senior citizens, has improved the physical and mental health of elderly people such as Laxmibai Naitam (Photo by Abhijeet Jadhav)

Laxmibai Naitam, who is 75 years old, is a widow living in Uthal Peth village in Chandrapur district. She has been afflicted with partial paralysis of the right hand and face since the last 12 years. Her only daughter who is married and settled far away visits her whenever possible.

With no caretaker, Naitam was dependent on neighbors for all her needs. Three years ago, she became withdrawn; she stopped all her activities including talking to others, moving around and taking medication. She spent most of her time lying in bed. In rural areas, there are many like Naitam.

Most of us love our grandparents, and memories of their unconditional love are few among the warmest ones. However, it is also a fact that the elderly are the most silent and voiceless among the group of vulnerable people.

A new community-based public-private initiative in Maharashtra improves the physical and mental health of the elderly in rural areas and helps them access government’s welfare schemes.

National Policy for Senior Citizens defines individuals aged 60 years and above as elderly or senior citizens. Those aged more than 80 years of age are referred as oldest old. Maharashtra has the second highest in terms of absolute number of elderly people in India. According to Census 2011, life expectancy at the age of 60 in Maharashtra is 18.1 years for men and 19.7 years for women.

Maharashtra is also among the top three for Old Age Dependency Ratio, which is the ratio of older dependents (age 64+) to the working age (15 to 64) population, with 15.7 elderly (64+) for a working age population of 100; for rural Maharashtra, the ratio is higher at 18.8. The national average is 14.2.

The statistics indicate that Maharashtra has a higher number of elderly people who are dependent for a considerable number of years. These demographic facts indicate an uncomfortable position as far as preparation for elderly welfare is concerned.

The elderly face multiple problems simultaneously, which affect their psyche. There are various health problems that they face on a daily basis, apart from major chronic diseases. Family members eventually get frustrated listening to the repetitive health complaints of the elderly. Mental health of the elderly is a sensitive issue, which is often neglected by families as well as by the state.

The state has many cities, leading to high intrastate migration for employment, leaving unattended elderly people in rural and semi-urban areas. This leads to higher neglect, low enrolment in welfare schemes, low healthcare, increased loneliness and related problems among the elderly.

All of these issues are superadded with a higher prevalence of various non-communicable diseases. Cumulatively this leads to a higher depression rate, low self-esteem, lack of happiness and hope. Various community-based studies in India indicate that the prevalence of depression among the elderly in rural areas varies between 12% and 53%.

Though there are multiple schemes for the welfare of the elderly, the reach is limited. Utilization of various government schemes by the below-poverty-line (BPL) elderly in Maharashtra is very poor, except for the schemes related to travel concession. 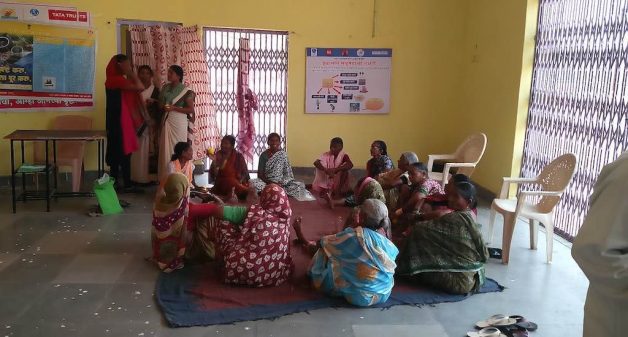 Village Activity Centers, such as the one in Bembad village, serve as a platform for the elderly to gather and get necessary information and therapy from health workers (Photo by Abhijeet Jadhav)

As per Building a Knowledge Base on Population Aging in India – 2012 (BKPAI) report, in Indira Gandhi National Old Age Pension Scheme (IGNOAPS) and Indira Gandhi National Widow Pension Scheme (IGNWPS), only 3.4% and 9.2% beneficiaries have enrolled in Maharashtra. Beneficiaries of the same schemes were much higher at 28.8% and 60.2% for Odisha, and 54.4% and 18.6% for Punjab respectively.

Maharashtra ranks very low on expenditure per elderly per month under various schemes. It is just Rs. 67, whereas neighboring state Goa ranks first with Rs. 446, according to a State of elderly in India – 2014 report by HelpAge India, an organization working for the elderly. The figures indicate that there is a paucity of attention rather than funds.

The perception that the older population is a liability holds our community from making best use of the most experienced people in our society. In Maharashtra, work participation rate is 31.3% for elderly in the 60+ age group and 5.9% for the 80+ age group.

The national average for the same is 34.4% and 9.78%. This may be due to lesser dependency on traditional livelihood options in Maharashtra. However, these figures are very low across the country in general.

On the one hand we are unable to tap into this resource, and on the other, we are not able to take care of them, leading to various social pathologies. The factual data is slightly dated, and things might be improving in recent years, which will get reflected in the forthcoming census; but the need for action is obvious.

Naitam is fairly active now. She moves around, visits her relatives, does various exercises daily in the community sessions in the Village Elderly Activity Center along with 40 others. Her physical and mental health has improved significantly.

The transformation was effected by the efforts of Sangeeta Yermalwar, an accredited social health activist (ASHA) who was trained under Elder Spring, a small initiative that tries to address various issues of the elderly.

A state government pilot program, supported by Tata Trusts and Janseva, was rolled-out in the Mul administrative block of Chandrapur district by the end of 2017. The healthcare component of the program was started in July 2018 and the activity centers in October 2018.

Apart from facilitating the National Program for the Health Care of the Elderly (NPHCE), this intervention has started ten pilot Village Activity Centers in the block to improve the self-esteem, physical activities, happiness and confidence among the rural elderly.

The centers would also act as a platform to discuss the problems of the elderly and extend help. Two specially trained ASHAs run these activity centers four times a week for one hour, though the elderly spend longer durations there. They get a chance to express themselves and also forget domestic tensions for a while. On their own, the elderly have started other activities like singing bhajans.

ASHAs give them various health information along with other activities, and also act as a connecting link between the elderly and the weekly clinic at the primary health center (PHC) under NPEHC. They give the elderly information about various schemes and the guidance to avail of the facilities.

After the pilot in Mul block, the program would be rolled out for the entire district, further refining it based on careful evaluation. Similar pilots are also initiated in one block of Telangana and Karnataka each, under Elder Spring, a special program of Tata Trusts. The intention is to improve access to healthcare for the elderly, along with stimulating inner positivity.

Existing schemes are isolated and look at one aspect like health or financial assistance at a time. Learning from these pilots may lay the foundation for future interventions for the elderly, where a package delivery can be facilitated while taking care of their psycho-social needs through such community-based activity centers.

Challenge for the sustainability of such interventions is limited resources, but new possibilities are being created. The Senior Citizens’ Welfare Fund under the Department of Social Justice and Empowerment can be a potential source to support such pilots and later the interventions as well.

Started in 2016-17, the fund is enabled by unclaimed money under central government saving schemes including that of the post office, public provident fund (PPF) and employees’ provident fund (EPF). These are substantially large funds. What matters now is the determination of the community and public sector.

Abhijeet Jadhav works with VikasAnvesh Foundation in Pune. Earlier, he was faculty at Tata Institute of Social Sciences, Mumbai. Views are personal.