Fishing communities living on the Bay of Bengal coast in Tamil Nadu, who are vulnerable to extreme weather events, are being trained by the Tamil Nadu government to prepare for disasters 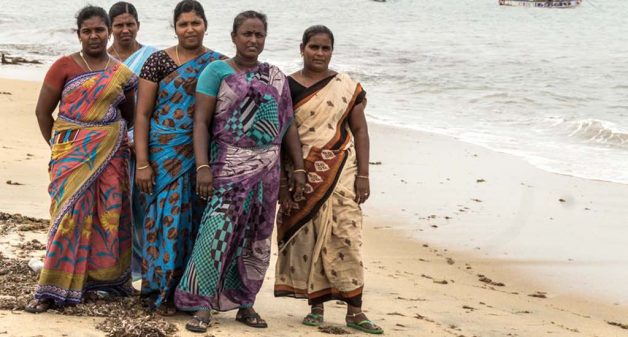 Selvam remembers the day in 2004 when her eldest son called her from Chennai. He was on a visit to Chennai and was at the beach when the waves rolled in. “He said the waves were huge. He and his friends ran for safety. Only later we learnt it was a tsunami and it caused a lot of loss,” said Selvam.

According to a report of National Cyclone Risk Mitigation Project (NCRMP), although cyclones affect the entire coast of India, the east coast is more prone to them, compared with the west coast. Hence, fishing communities along the Bay of Bengal coast are more vulnerable.

Roachmanagar is one of the villages on the Bay of Bengal coast. Some fishermen of Roachmanagar in Kadaladi administrative block of Ramanathapuram district in Tamil Nadu recall their boats getting damaged beyond repair during the 2004 tsunami and also some cyclones.

With cyclones and storm surges on the increase, coastal communities are more vulnerable to climate risks. This has necessitated the communities’ disaster preparedness. The training, provided by various government departments six months ago, has equipped men and women of Roachmanagar to save themselves and others in the event of any disaster.

“The word tsunami itself was new to us. We have faced cyclones. But we were never afraid of the sea,” Selvam, who uses only one name, told VillageSquare.in. Though there were no casualties during the tsunami in Roachmanagar, the damage in the other districts caused fear, and the vulnerability of coastal villages, said fisherman Thevaram Christy.

Many villagers said that the monsoon pattern has changed. “Climate is changing. It is not the same weather pattern that my mother witnessed. The sea was different,” said Kavitha S. “Now there is so much of erosion too.”

According to Kavitha, even the wind patterns have changed. “During a certain time of the year we get a different kind of wind, which we categorize as kodai kaathu, kondal kaathu and so on. All that is changing,” she told VillageSquare.in.

With weather patterns changing and coastal communities more at risk, the state government conducts trainings for them. Disaster risk reduction (DRR) is the ultimate objective of the training, preventing loss of lives and property. 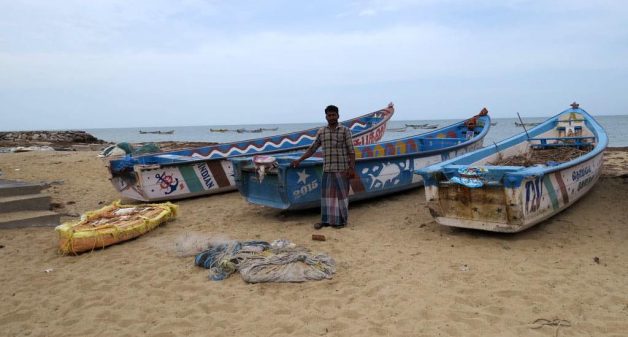 “People from the revenue department approached us and said that they wanted to conduct a training so that we would be ready to face natural disasters,” said David X., head of Village Development Committee of Roachmanagar. “The officials had discussions with the village elders and we agreed to have the training.”

Most of the villagers took part in the training. Officials from various departments including the Revenue Department, Police Department, Coast Guard and Fire Department were involved in educating the villagers about disasters and in equipping them about safety procedures.

Though the village is more prone to disasters because of the weather and proximity to the sea, the residents were trained about fire hazards as well. Maria Herline said that they learnt how to put out fires, using wet sacks. “Officials from the electricity department told us that we should not touch electric posts and we should not operate electrical household gadgets,” said Celcia J.

Muniasamy P. from the police department said that the importance is on saving lives first and only then possessions. However, the villagers know the importance of saving crucial documents. “We were taught to keep important documents such as ration card and Aadhaar card in a safe place that can be easily accessed in case of an emergency,” said Celcia.

Officials from the Coast Guard gave them the search and rescue (SAR) contact number for emergency situations. “They said if we are lost or face problems while at sea, we should call the toll-free number 1554 and that they would come in helicopters and rescue us,” David told VillageSquare.in.

The villagers learnt how to conduct themselves in the face of medical emergencies that happen as a result of disasters. “We learnt that the medical team would tie different color ribbons like red for severely injured, black for the deceased and yellow for ordinary wounds,” said Herline. “Seeing that we should understand, keep calm, and let the doctors do their work. If the injured cry out, we should comfort them and not get agitated.”

The villagers know that cattle sense impending natural disasters much before human beings. “So if the cattle are agitated or if we have a disaster alert, we have to let the cattle loose and not tether them. The cattle would run to safety,” said Celcia.

District officials, when they receive alerts, communicate the information to the villagers by various means. “People come in auto rickshaws and make announcements about natural calamity,” Celcia said. With every villager having a mobile phone, they get a message about the weather conditions such as wind speed on their phone now. “We get messages as well as calls. If there is a cyclone warning, we get messages at night also,” said Herline.

“After Cyclone Gaja (2018), we get messages regularly on our mobile phones from the Fisheries Department,” said Celcia. The Indian National Centre for Ocean Information Services (INCOIS) provides the communities the information services.

According to Herline, the trainers told them that they should heed the government’s warnings, if there was an alert not to go fishing. “Generally our men say that they know the sea well and there will not be any problem. But now everyone knows that the sea’s conditions are unpredictable,” she said.

The women find getting messages on their phones very useful. “When we get alerts, we are able to stop the men in our family from going into the sea,” said Celcia. “But our men are also alert, especially after Cyclones Ockhi (2017) and Gaja.”

Muniasamy, who was assigned to take care of people during Cyclone Fani (2019), recalled an incident in Tuticorin, when a woman was abandoned. “We carried her on our head, rescuing her with the help of a lifebuoy,” he told VillageSquare.in. 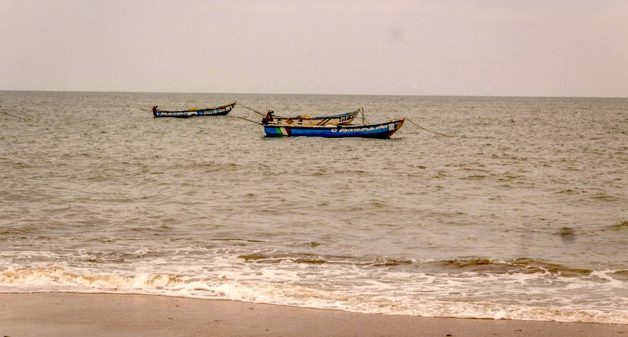 Villages such as Roachmanagar on the Bay of Bengal coast are vulnerable to climate risks, making disaster preparedness of residents essential (Photo by Sharada Balasubramanian)

The villagers learnt how to lift people, rescue women and physically challenged people and give them first aid. “They also taught how men should lift or carry women without making them uncomfortable,” said Celcia.

“Since we work with children, we also organize DRR programs regularly in the government school at Kannirajapuram, about 1km away, where Roachmanagar children study from class VI onwards,” said Mannar Mannan, of People’s Action for Development

Celcia said that on alternate weeks, the government officials visit schools and train students. Herline, a mother of three, said that the children getting trained on safety aspects put her apprehensions at rest, as they may not always be together as a family.

As part of the training, the villagers had a mock drill that covered all the aspects of the disaster training received. “When the district collector visited, we were having the mock drill in the parish hall and when he saw some of us running out shouting, he thought there was some problem for real,” Herline told VillageSquare.in.

It’s not only the community that is trained; all the stakeholders are equally involved and trained. Muniasamy said that he is part of a team of six. He recalled working in coordination with the fire department during Cyclone Fani.

The team is equipped with necessary items such as life jackets, life buoys, plastic pots, ropes and the like. “Even if there are no life buoys or any of the items, we are trained in such a way that two of us can lift a person and save him,” he said.

The villagers appreciate all the initiatives by the government regarding disaster preparedness. “After the training we know that we should go to higher ground if the sea recedes or if the color of the seawater changes,” said Herline. “Because that would be an indication of tsunami, and we could go to the cyclone shelter at Kannirajapuram.”

The participants said that the training was extremely useful. “It’s good that we learnt so much about how to save ourselves and others during disasters. It is better to keep ourselves prepared for emergencies,” said David. “But we really hope we never have to use what we learnt.”

Sharada Balasubramanian is a Coimbatore-based journalist. Jency Samuel is a civil engineer and a journalist based at Chennai. Views are personal.