Even as Kerala reels under yet another flood due to extreme rainfall, people in the tiny village of Upputhode in the Western Ghats are still traumatized from the loss they suffered in last year’s deluge 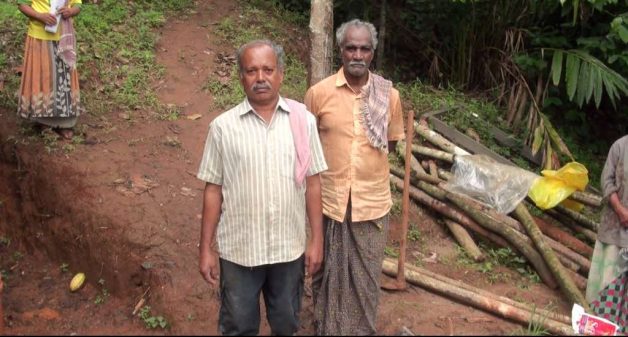 People in the hilly Upputhode village still live in fear of another landslide (Photo by K. Rajendran)

A few years ago, the tiny village of Upputhode in the hilly district of Idukki in Kerala was a perfect example of prosperity brought on by the benign ecosystem of the Western Ghats and the hard work of the people living there. Upputhode presented an idyllic scene with wildflowers creeping over evergreen trees, and abundant cash crops such as cardamom, black pepper, rubber, coffee and nutmeg being cultivated by most households.

Today, ravaged by the unprecedented floods last year, the picture has changed dramatically for the worse. Kerala, known for as the land where the monsoons arrive in India, is now grappling with widespread floods brought on by extreme rainfall.

In June and July, the first two months of the southwest monsoon, there was a chance of drought in Kerala because of a rainfall deficiency of 40%-50. Till July 2, it had received just 365.99 mm rain compared with the average of 697.8 mm, which translated into a deficiency of 48%. But by August 10, the deficiency dropped to 8%, with most of the state receiving copious amounts of rainfall, resulting in floods.

This year’s floods bring back the memories of the deluge that Kerala suffered last year in August. For a few days in the second week of August, the skies opened up in Kerala, resulting in unprecedented floods that left six people dead and millions displaced. 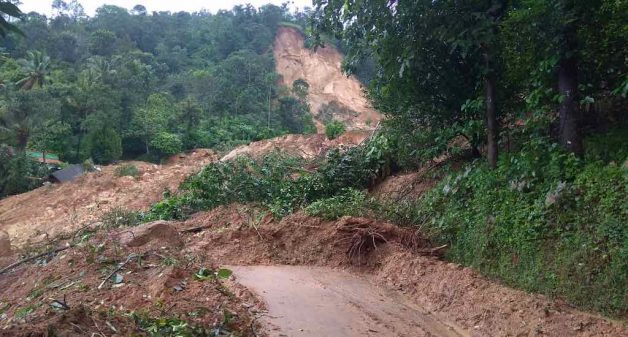 Debris from last year’s damaging landslide has not been cleared yet (Photo by K. Rajendran)

The floods last year spelt doom for the hilly Upputhode village, which reported extensive damage to homes and farms. This year too, floods have damaged the village but not as much as last year. Many residents are staring at a bleak future.

“At any cost I have to leave this deadly village,” said Johnson, a resident who is called a night migrant by other villagers. Johnson, who uses only one name, stays in the village with his wife only during the day. Every evening, they move to their son’s house in the adjacent village.

This strange behavior is a result of the trauma Upputhode villagers suffered last year. On August 17, 2018, many homes near Johnson’s house were completely destroyed by a landslide, killing four of his neighbors in the process. His house still stands, but Johnson doesn’t know for how much longer. “At any time, I suspect my house too would be ruined under another deadly landslide,” said Johnson.

Unlike Johnson, Joseph Antony has been made a seasonal migrant by the flood. He is now scared of living in the village during the monsoon season. “I will be here except the monsoon. I am afraid of living here during the rainy season because of last year’s flood,” he said.

The Accredited Social Health Activists (ASHAs) still visit the village but 42 out of 250 homes are vacant, as the inhabitants have permanently migrated to other places. Most of them are well off. Another cross section is trying to migrate, but because of financial constraints, they are compelled to stay. The poor and the most vulnerable have no other option than to continue to reside here.

Despite the panic among the villagers, P. Geetha (46) is unperturbed and says she will not migrate from Upputhode. But as an ASHA worker, she too has been affected by the migration. 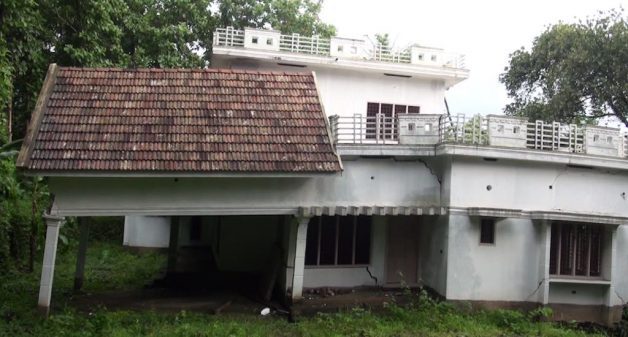 Many houses have been destabilized by the landslide (Photo by K. Rajendran)

“I used to get a small amount when I poured polio drops into a kid’s mouth. I have been making my livelihood with these kinds of work that are connecting homes to various government-sponsored health schemes,” she said. “With the migration being intensified, my earnings also got drastically slashed.”

Fear of another disaster

Cutting across the category of jobs, almost all are the victims of flood-triggered migration. The main reason they cite is the fear of another disaster. “I am very much afraid to walk through the place where four people were killed under the debris of landslide,” said a villager on the condition of anonymity.

With the persisting fear of a probable landslide at any time, the villagers are still traumatized. The government has provided for a small team of mental health experts who have given psychological counseling. Many streetlights were also installed so that the people are not afraid of the dark.

Seemon Vasu, Vice President of the village council, said that most people fear another landslide remains. He too is afraid of one.

Geologists do not deny the chances of another disaster where landslides happened last year. “Crumbled hills would take a long time to get stabilized. They don’t have the holding capacity of heavy downpour. It is better to evacuate all people residing in the nearby area, if the ongoing torrential monsoon turns severe,” said S. Sreekumar, a well-known geologist.

Another section of the people in the village is unwilling to bow down before the looming fear. But they too are exploring options to migrate due to the steep decrease in the yields of cash crops after last year’s flood.

Sunnykutty is a traditional farmer who has been cultivating coffee, black pepper and nutmeg for more than three decades. After the flood, his yields from the cash crops have been slashed by a half. “In the year previous to the last year’s flood, my coffee plants had produced 100 kg of nuts. Last year, I got hardly 50 kg,” said Sunnykutty. “The fertility of the soil has been washed away by the flood.”

As the plantation sector in Kerala has been downed in crisis, people have turned to the central government’s rural jobs guarantee program as a last resort. But most young people are unwilling to rely on it forever. Most of them are venturing out of the hills, looking for other opportunities.

Villages on the brink

Upputhode is not the only village to suffer. According to A.N. Somadas, District Secretary of Idukki, Kerala Shastra Sahithya Parishath, an organization that spreads awareness about science and environment, many villages in the Western Ghats are on the brink.

“Encroachments and violations of basic principles of environment protection are the root cause,” Somadas said. “Safety of the villages couldn’t be ensured unless and until environmental protection measures are strictly implemented.”

Sadly, a year after the disastrous flood, many villages in the Western Ghats are being rocked by another spate of landslides, killing at least 80.

As of today, in this year’s torrential rains, Upputhode village hasn’t suffered any calamity. In the wake of last year’s experience, many people are still migrating to other places. There seems to be only one option left to them for a sustainable future: turn to more ecofriendly livelihoods that are capable of coping with the environmental realities.

K. Rajendran is a journalist based in Kerala. Views are personal.