The revival of muslin, a fine cotton cloth famous for centuries, has infused financial stability into the lives of traditional spinners and weavers of West Bengal who were struggling for survival earlier 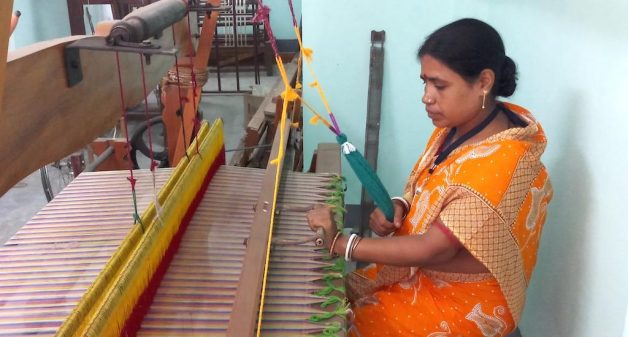 Rajeshwar Guin has been a handloom weaver for over two decades. The 42-year-old is a descendant of a family of traditional weavers that has been living in Sashinara Baroaritala village of East Bardhaman district for the past several generations.

His family’s poor economic condition had forced Guin to assist his father in weaving while he was still a teenager. “There was hardly any demand those days. The occasional orders made it difficult for my father to fund my education,” he said.

Guin joined his father to supplement the family’s income. “But still it was quite challenging to keep the kitchen fire burning even after we toiled hard for several hours a day,” he said. But the revival of muslin, a fine and delicate cotton fabric, has brought a change in his life.

“The clothes made from muslin are very much in demand nowadays and the state government is a regular buyer through co-operative societies that give us work. I manage to earn around Rs 8,000 per month which increases sometimes depending upon orders,” he told VillageSquare.in.

Guin is not alone. Because of the revival of muslin, over 30,000 spinners (katunis in Bengali) and weavers are weaving their livelihood out of muslin in Nadia, Murshidabad, Hooghly, Bankura and East Bardhaman districts of West Bengal.

Hand-spun khadi with a thread count of more than 150 brings out cloth of fine quality called muslin. According to researchers, muslin originated in East Bengal (now Bangladesh) that was famous for the production of superior quality cotton since the 3rd century, though the name muslin was given much later. 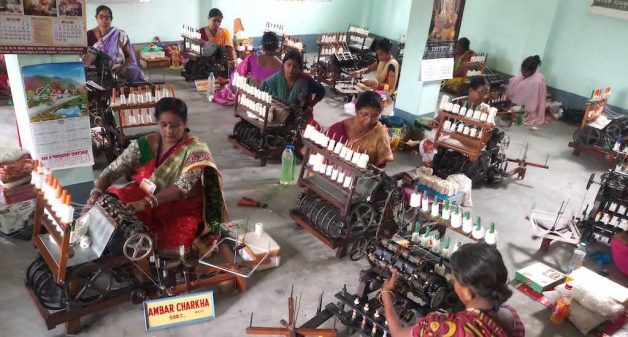 “While it was traded during Roman times too, the fabric became a regular trade item during the 8thcentury, especially with the Arab traders. They exported the delicate cotton fabric to countries in the Middle East, Turkey and Europe,” said Saiful Islam (63), a Bangladeshi based in the UK,  author of Muslin, Our Story, and maker of Legend of the Loom, a documentary.

“The fabric reached its zenith during the Mughal era. They patronized the craft and also played an important role in its promotion. The fabric was often traded through Mosul in Iraq, where Marco Polo named it as muslin. In India it was known as mulmul,” Islam told VillageSquare.in.

“Phuti karpas (Gossypium arboreum var. neglecta), the cotton plant, grew along the banks of River Meghna. Its fibers were the silkiest and shrank instead of swelling when soaked in water. Efforts of the British to grow the plant outside the natural habitat failed, perhaps because the climatic conditions and soil were suitable along Meghna,” said Islam.

The prefix Dhaka was added to muslin in the early 19th century, when imitations cropped up in other parts of the world. According to Islam, the East India Company that made a fortune out of muslin trade was also largely responsible for its downfall. Famines and natural disasters led to many weavers taking up agriculture to sustain their livelihood.

“The English also imposed heavy taxes on muslin, forcing the weavers to shift to other trades or die of starvation,” said Islam. “During the Industrial era, they focused on the cotton industries of their country, completely ignoring muslin. They took the raw material from here, and shipped the finished cotton product back to India, thus hastening the demise of muslin.”

Soon after Independence, the muslin weavers of West Bengal began to procure cotton locally, to produce clothes made of the fine fabric. But lack of markets and demand hit them hard, especially during the early 1990s when craftsmen reached the brink of starvation. 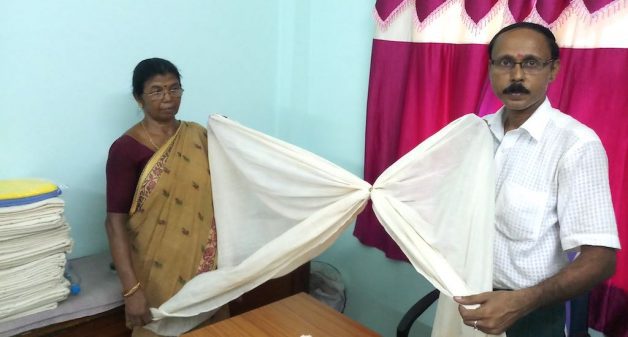 How fine muslin can pass through a finger ring. Its revival has improved livelihoods of many spinners and weavers (Photo by Gurvinder Singh)

In the late 1990s, Khadi and Village Industries Commission (KVIC) stepped in and began to support the weavers by facilitating bank loans, improving the infrastructure and creating markets. But the real makeover came in 2013, when the state government sanctioned Rs 62 crore for the development of muslin.

“The fund helped us to improve the infrastructure of the units and train the workers. We provided workers with raw material and looms, and got experts to train them on various designs,” said Biswajit Sarkar, planning and evolution officer.

KVIC created new markets for them. “We are also in talks with Japan for export of the finished products,” Biswajit Sarkar told VillageSquare.in. “The turnover has crossed Rs 100 crore for 2018-19.”

Artisans are also being awarded for their role in the revival of the craft. Tapasi Ghosh, a khadi spinner at Nabadwip in Nadia district was honored with a national award in 2014-15 for her excellence in the field.

Presently the cotton for muslin comes from Guntur in Andhra Pradesh, as the region, given its climatic conditions, produces the best quality cotton. The finesse of the fabric depends upon its hanks.

“A 2-meter long fabric of 200 counts weighing around 5 grams can cost nearly Rs 700, while a 500-count fabric of the same length, which is super fine, would cost Rs 6,000,” said Subhasis Chakraborty, secretary of Matiary Kutir Shilpa Pratisthan under the West Bengal Khadi Board.

“The fabric is so delicate that it can even pass through a finger ring,” Chakraborty told VillageSquare.in. “The market has been good for the past few years and we have been getting regular orders. We have a budget of Rs 72 lakh from KVIC for 2019-20.”

According to Chakraborty, apart from the fixed remuneration, the artisans receive other statutory benefits such as bonus, insurance and ex gratia payments. The common production center units enable many artisans to take up weaving.

Spinning and weaving muslin cloth requires intensive training. It can take up to 10 years for an artisan to learn how to spin a 500-count of muslin cloth, which is of very fine quality.

However, such has been the revival that even the younger generation has started looking it as a livelihood. “I decided to work as a katuni because it is difficult to get job nowadays and travelling far from home is not always safe for women,” said Sutapa Sarkar (29), a trainee.

“I get a stipend of Rs 200 every day during training, which would increase once I am fully trained. Apart from the monetary benefit, we work in a safe environment and return home after fixed hours of duty. I do not have to rush to the city for work and worry about returning home early,” Sutapa Sarkar told VillageSquare.in.