The exquisitely handcrafted Baluchari sarees of Bengal have made a welcome comeback. Once forced into menial jobs, Baluchari weavers are busy again because demand is increasing 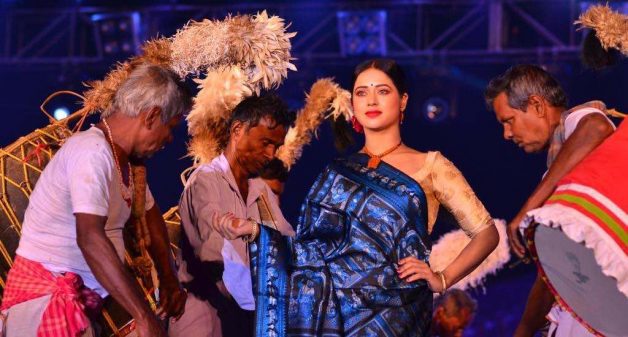 Amitava Pal says he is racing against time nowadays. The 40-year-old is busy in his workshop at Bishnupur in Bankura district of West Bengal, weaving a Baluchari saree that costs around Rs 1.5 lakh. Situated at a distance of around 200 km from Kolkata, the small town of Bishnupur is famous not only for its local terracotta Hindu temples but also for the handcrafted Baluchari sarees.

Baluchari sarees are woven using richly dyed silk with intricate motifs depicting Indian mythology and folk tales woven onto its large pallu.  The motifs are taken mainly from the epics of Ramayana and Mahabharata though a mild change has been brought in to cater to modern tastes.

The weaving of Balucheri saree, that owes its name to the place where weavers from present day Bangladesh were settled in the 17th century, underwent a steady decline. Revived with government support a few years ago, the Baluchari weaving sector has vastly improved, with demand peaking during Durga Puja, the largest annual festival in West Bengal, Tripura and Bihar.

The history of Baluchari sarees goes back to 1704 CE when Nawab Murshid Quli Khan, the Mughal governor of Bengal, shifted his base from Dacca (present day Dhaka in Bangladesh) to Makshudabad (now Murshidabad) in West Bengal.

“He brought several weavers from Dhaka and helped them establish themselves in Baluchar (now Jiaganj) village in Murshidabad,” said Swati Batabyal, lecturer of fashion designing at Government College of Engineering and Textile Technology (GCETTS) at Serampore in Hooghly district.

“Over the years, the weavers’ designs became quite popular. The sarees were normally worn by the elite and landlords because of their high costs,” Batabyal told VillageSquare.in.

A series of natural disasters wreaked havoc on the weaving industry, forcing the craftsmen to settle in Bishnupur. According to Batabyal the shift was visible in the sarees as the weavers brought the themes of local terracotta temples that was once the capital of Malla kings,” said Batabyal.

“The craft almost died during the British rule because of financial and political reasons until Subho Thakur, a famous artist, revived it in the first half of the 20th century. He invited Akshay Kumar Das, a master weaver of Bishnupur, and taught him the techniques of jacquard weaving. Since then the same method is being followed,” said Batabyal.

With a few days to go for Durga Puja, over 2,000 weavers working in 600 handlooms in Bishnupur are burning the midnight oil to complete the orders for Baluchari sarees whose spate of demand has added a new lease of life to their livelihood that was once at the brink of extinction.

“We sold around 10,000 sarees from April till September and we continue to receive orders from Tantuja, the West Bengal State Handloom Weavers’ Co-operative Society of the state government,” said Haladhar Das, 49, manager of Bishnupur Tanthin Tant Shramik Sambay Samity Ltd, a co-operative society of weavers. “Our turnover was around Rs 77 lakh in 2018-19. We hope to touch Rs 80 lakh this financial year.”

“It takes us around 55 days and over 12 hours of labor every day to complete a Baluchari Saree that costs around Rs 1.5 lakh. The saree is costly because of its meticulous and intricate designing work,” Amitava Pal told VillageSquare.in. Silk yarn, the raw material, comes from Malda district.

“The saree would be exported to art connoisseurs abroad.  We are working tirelessly round the clock as there is a bulk order to be completed before the Durga Puja,” said Pal. “We can hardly afford any time to rest because of the work overload.”

Haladhar Das was, however, quick to add that the situation was not the same till about two decades ago when the weavers and those running ancillary units involved in dyeing and other works relating to silk were facing starvation. “Around 1,400 looms were functional in the early 1990s, known as the golden age of Baluchari sarees in Bishnupur,” Das told VillageSquare.in.

“However, the escalating cost of raw material, coupled with the public losing interest in Baluchari sarees made life miserable for weavers who suffered extreme financial losses and several of them were forced to pedal rickshaws or do paltry jobs for livelihood,” said Das. “Obviously, the number of looms came down.”

The situation had reached such an extent that Tantuja, a weavers’ cooperative promoted by the West Bengal government, had to pay the weavers as soon as they delivered the sarees to ensure that they would not quit weaving.

“We were the major buyers of Baluchari sarees but the demand had hit rock bottom in the late 1990s and early 2000s that forced us to introduce a system to help the weavers as well as keep our retail stores running,” Rabindranath Roy, managing director of Tantuja, told VillageSquare.in.

In 2011, the first ray of hope came in the form of geographical indication (GI) tag that gave the Baluchari sarees of Bishnupur much needed publicity and recognition. So far, only three types of sarees from Bengal, namely, Baluchari, Santipur and Dhaniakhali, have obtained GI tags.

The traditionally designed sarees were put on display and their sales gave lot of mileage. “Of late, online sales have also boosted the demand for Baluchari. We have purchased around 5,000 sarees from weavers in Bishnupur in the ongoing year,” said Roy.

At present, Tantuja has 84 showrooms, including 67 in Bengal and the rest in other parts of the country. With increasing interest, artisans like Amitava Pal earn around Rs 50,000 per month, while those with lesser experience make about Rs 20,000.

The district administration has also been supportive in promoting the sarees. “We organized a fashion show last December where models walked the ramp wearing the Baluchari sarees. It created hype and attracted new buyers,” Manas Mandal, sub-divisional officer at Bishnupur told VillageSquare.in. “We have also set up a weekly market where sellers gather under one roof, which has proved helpful for buyers.”

Fashion designer Agnimitra Paul feels that time has come to bring a change in the traditional weaving of Baluchari sarees to capture new markets here and abroad. “The weavers have been using the same colors which have become quite old-fashioned. They should try to introduce different color combinations that can attract the young generation,” she said.

“There should also be a change in the design pattern but the cast for making designs is quite costly and it is difficult for weavers to buy it. The government should offer financial assistance to weavers,” Paul told VillageSquare.in.  “Baluchari sarees are considered for the elite and the price starts from Rs 6,000, but weavers do not get the same remuneration.”

Paul has also been experimenting in Baluchari for the past two years, by designing Indo-Western outfits such as jackets and pyjamas and trying to create a new market for it.

She sees a lot of potential as the new products are in demand in the foreign market. “It is the need of the hour to bring a change in the mindset of the weavers to try new things and the role of the state administration is equally important to bring a drastic overhaul in the lives of the weavers,” she said.