Despite growing apricots and apples, farmers in Shyok Valley in northern Ladakh are unable to turn a profit because lack of connectivity makes it difficult to sell their produce 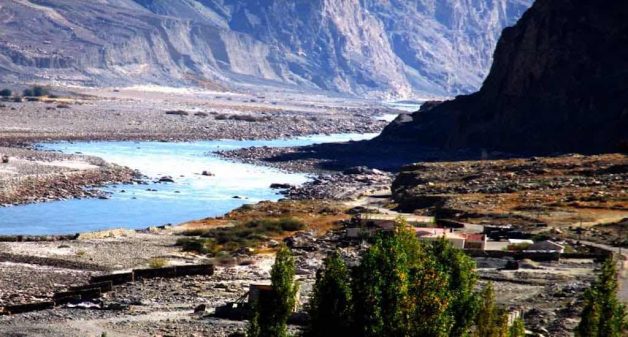 The Shyok River enables farmers to grow two crops a year, but they lack facilities to market their produce (Photo by Gouri Agtey Athale)

Shyok Valley in northern Ladakh, ahead of the well-known cold desert Hunder in the Nubra Valley, has a reliable source of water from Shyok River after which it is named. The water and the relatively mild weather for eight months of the year allow farmers to raise two crops.

Yet for Ghulam Mehdi, a 31-year-old farmer, it’s tough to make ends meet. He is the youngest of five brothers, and together they own just under 2 acres of land (15 kanal in local terms) in Garadi, a village in Leh district and close to the town of Turtuk in Baltistan.

They have a fishpond, dug under a government scheme to promote pisciculture, where they have mountain trout and other fish.  Mussa Mehdi, the oldest of the brothers, dug the pond manually since there were no machines. The few cattle and poultry fulfill the needs of the family. They run a wayside eatery and a home stay.

As for their income, Ghulam said, “What comes in goes out as fast since we are a 28-member household.”  Assets, for this family at least, remains a distant dream, given its size, and succession, which Ghulam hinted at – the 15 kanal of land will be divided among the five brothers, each of whom has several children.

With the river flowing noisily below their farm, the fields of buckwheat were a lush green. The crops they grow are buckwheat, barley and millets; but the poplar and willow trees grown here are the ones that provide income. Yet without connectivity beyond the valley, farmers struggle to sell their produce.

“We need better infrastructure, roads that will take our produce from here,” Mussa Mehdi, oldest of the brothers told VillageSquare.in. “If the airport at Thois is opened up, we would get more tourists.” Thois is an Indian Air Force (IAF) base, close to Garadi but used only for military flights.

Living in far-flung, areas cut-off from the rest of the country, people here understand the benefits of tourism for the local economy. They know what tourism has done to the economies of Leh and other parts of Ladakh.

But this is an area close to the Line of Control adjacent to Gilgit-Baltistan in Pakistan-occupied Kashmir. Though the military air base cannot be used for tourism, the villagers feel it can be used to transport their agricultural produce from this remote and mountainous region.

A few years ago, the juice of sea buckthorn that grows wild in this region, was a big hit, following awareness about its health benefits. But later it went out of fashion because of the amount of sugar added to it. The fruit is sour and slightly bitter, eaten straight off the wild tree.

The Mehdis produce about 15 quintals of fruits but getting it to market where they will earn significantly is a question that keeps coming up.

The region, with its eight-month farming season, is better off than the other parts of the union territory, said Ghulam. “Winter ends by February so we start planting by March. We have a mild climate from then till October so we can grow two crops unlike in other parts of Ladakh,” he told VillageSquare.in.

In early September, the Mehdi’s farm in Garadi in the narrow valley in the shadow of Karakoram mountains had apple and apricot trees laden with the last of the fruits. The brothers said that support from the government, especially in marketing, would be of help to them.

“We grow apples, apricots and some grapes,” said Mussa. “If we store the apples which are now available and sell them in January and February, we would get a better price. We do store them but transportation from here to the markets is very expensive.”

Access to marketing, always a sore point with growers, is the crux of the problem. And farmers in Shyok Valley are no different from those in other, better-connected, parts of the country, who also point out that they can grow the produce, but marketing is not their expertise.

Be it vegetable, fruits or grains like millet, buckwheat and barley, everyone practices organic farming. “All our produce is organic and it would be good if some agency would transport our goods to the market. It is very expensive for us to take it out of our region,” said Ghulam.

As the fresh apricot season ends and the value-added dried apricots start coming into the market by end of September, the farmers are keener than ever that their produce reaches markets where there would be a better price realization.

Gouri Agtey Athale is a Pune-based journalist. Views are personal.