With their forests degrading for a variety of reasons, Gond elders are rekindling interest about forest biodiversity among the younger generation, and are inspiring villagers to protect the forests 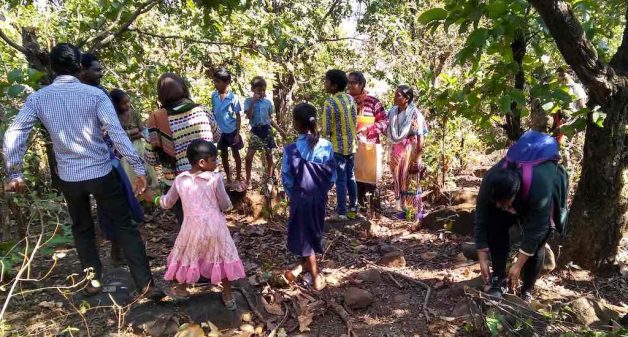 A walk through the forest organized by elders of Jharna Ghughari kindled in children, an interest about forest biodiversity and the need for forest conservation (Photo by Saurabh Singh)

On 30 January this year, on a sunny morning in winter, 10-year-old Khilawan, and a group of around 25 people comprising of children, young adults and the elderly were scouring the forest adjacent to Jharna Ghughari, their village in Dindori district of Madhya Pradesh.

Excitement and interest were visible on the young faces. Faces of the elderly showed satisfaction. The group discovered the richness and diversity of the jungle. They walked almost 7 km across the forest, to become familiar with the varieties of plants and animals existing in the forest, understand their dependence on the forest products and their various qualities.

With the premise that villagers would protect forests if they knew that it is an inherent part of their life, elders of Jharna Ghughari village help the younger generation discover the rich biodiversity of their forest. While the villagers turn forest defenders, the children take to conservation by documenting the species in a biodiversity register.

During the walk, the group collected leaves, barks and flowers, developing an understanding about the occurrence of certain plants in particular parts of the jungle and about the various parts of different plants used by the villagers for various purposes.

They found trees such as sal, teak, tinsa and dhawaa, which are used for constructing houses and making agricultural implements. They found plants such as bel, harra, bahera, amla, kumbhi, paadhan, satavar, surteli, jamrashi banda and batua which have medicinal use and can cure illnesses like abdominal pain, snake bite, rabies and indigestion, besides respiratory and heart diseases.

There are trees whose leaves and barks are used to catch fishes, and trees whose leaves are consumed as food. Some trees such as tendu, chaar and kusum are of economic importance. In addition to discovering the vast number of species that were still present in the village even after extensive deforestation, the group found many animals or their traces in the forest.

The children realized that various plants and animals were decreasing rapidly and that local knowledge about these species would be lost with the older generation. It was important to pass the elders’ wisdom to the younger generation and document it in an easily understandable manner.

Khilawan and his friends in the primary school made a biodiversity register with dried leaves, flowers and barks that they had collected. They wrote the local names of the plants, their usage and occurrence in the register. Khilawan said that the register would be kept in their school.

Hiralal, their teacher, assured them that he would help them update the register with details whenever they found a new species. The villagers now know that this register will help them find the species that are disappearing fast, and take actions to prevent it. This would strengthen their bond with the forest.

Jharna Ghughari, a forest village about 9km from Amarpur, the administrative block’s headquarters, is one of the three villages chosen for the action research. More than 84% of its population are Gonds, a Scheduled Tribe category.

Forests, with their diversity of flora and fauna, have been an integral part of the lives and livelihoods of Adivasis in central Indian Plateau. Forests are their source of food, fodder, fuel, medicine and timber, as well as manure in the form of decomposed leaves and branches for the lands in the lower catchment.

Adivasi farmers’ knowledge and skill of farming were traditionally based on the intricate know-how of interdependence of forest and farming system shaped by other natural phenomena such as rainfall, sunlight, water, air, etc.

After the forest department was established, the floral diversity started decreasing gradually, as they started planting / nurturing only timber species. At the same time, with the advent of modern agriculture, seeds of high yielding or hybrid varieties along with chemical fertilizers and pesticides gave the farmers an assurance of higher yield.

The farmers started practicing what the seed, fertilizer and pesticide companies prescribed. They gradually became dependent on the inputs supplied by the companies, and no longer needed the intricate knowledge about the forest-farm production system.

Gradually the farmers forgot their generation-old knowledge and skill – a phenomenon called deskilling. As the deskilled Adivasi community has less attachment and knowledge about forests, they remained passive observers to the decline of their forest.

In general, in the Adivasi villages that fringe the forests, the elderly people were concerned about the decline whilst the younger generation and school-going children had neither the knowledge about the plants in the forest nor were they bothered about the gradual destruction.

During discussions as part of the action research, the elderly raised their concern about the gradual thinning of the forest. They said that, on the one hand, the forest department was planting trees such as sagwan (teak), valued timber, thus replacing other plant species. On the other hand, legal and illegal felling of trees was denuding the forest every day.

The forest at Jharna Ghughari spreads across 800 hectares. The villagers said that the gradual loss of knowledge among the younger generation about floral diversity and its use in Adivasis’ life was the reason for their lack of interest in protecting the forest.

They said that the last two generations have experienced the consequences in the form of less fodder, less firewood, water scarcity, and loss of medicinal herbs. During discussions, most of the villagers said that they wanted to live in a village where the forest is dense with diverse flora and fauna, and their farmlands are fertile.

Each of the villages took responsibility to protect a designated part of the forest. They started guarding different parts of the forest to stop illegal felling, and confiscated the axes and cut wooden logs from outsiders coming to cut trees.

Elderly people like Gangaram, who felt that the young generation lacked knowledge about their forest and hence lacked interest in protecting it, decided to educate them about the forest, the numerous species and their uses, the species that were disappearing fast and how they could rejuvenate the forest.

It was the elderly people like Ramki Bai and Gangaram who organized the walk through the forest On 30th January, to educate the children. They involved Hiralal since he has significant knowledge about their forest.

The villagers’ idea that forests could be protected if the youth knew about the different species and the uses was unique. The method that the elders adopted to transfer this knowledge to the younger generation, through a walk in the forest, was also unique. The walk enabled the creation of a biodiversity registry.

The awareness enabled the villagers to start guarding the forest. This two-pronged strategy, one for immediately stopping illegal felling of trees, and the other for a continued process of forest rejuvenation through knowledge enhancement and interest creation works well.

Villagers of Jharna Ghughari plan to take this initiative to nearby villages and involve schools so that a movement can be created to pass on the knowledge through generations towards forest conservation. The forests will thus be rejuvenated and the people of Jharna Ghughari will reside in the village they dream of.

Dibyendu Chaudhuri, a geologist by training, has been helping the marginalized in central Indian Plateau strengthen their livelihood. Parijat Ghosh is an electrical engineer turned development practitioner. Saurabh Singh has been working with tribals in Madhya Pradesh. They work in Professional Assistance for Development Action (PRADAN). Suhasini Bali, who works in Jagori, an NGO, was with PRADAN and was involved in the biodiversity register work. Views are authors’ own.