Craftswomen of Bihar have tailored Sujini, a traditional embroidery once practiced for internal use, to suit modern needs, lending it an international appeal 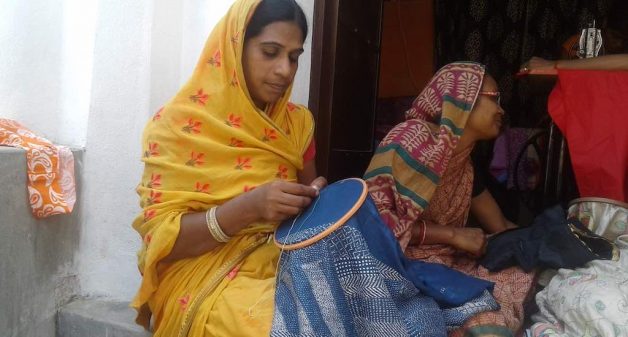 Chandrani Choudhary and her young daughter Tanushree were busy on a mid-October afternoon, giving final touches to a hand-stitched embroidery on a bright red stole. They had been working on Sundays and festival days as several artwork orders from abroad had to be completed on time.

They are among nearly 40 women and girls, who are artisans working with dedication, to hand-stitch Sujini embroidery on clothes, in Sarfuddinpur, a village surrounded by lush green paddy fields and litchi orchards, in Muzaffarpur district.

Their hard work in recent years has made an unknown embroidery confined to rural pockets of Bihar a unique artwork across the country and abroad, giving them financial independence to them in the process, and boosting rural economy.

Traditionally rural women did Sujini embroidery at home in their free time, to give a decorative touch to household articles such as pillow covers, box covers and cotton bags. In some households, women used Sujini for ornamental purposes such as wall hangings, but all for their own use.

Renu Choudhary, an artisan in her mid-50s, recalled her childhood days when her mother, grandmother and other women in her neighborhood embroidered peacock, lion, tiger and fish motifs on old and new clothes, on bed sheets, curtains and cotton bags locally known as thaila.

Renu Choudhary said that this traditional craft has changed the life of women in Sarfuddinpur and several other villages in Muzaffarpur. According to her It became a professional work a few years ago, because of the initiative of a group of women to save the rural craft from extinction.

“Earlier we used to be idle at home, but not anymore,” Gudia Devi, a Sujini artisan in her mid-40s, told VillageSquare.in. “Sujini has provided us work, money, name and an opportunity to visit Goa, Mumbai, Delhi and Bengaluru to express ourselves through our art.”

Chandrani Choudhary and Gudia Devi said they have been doing Sujini embroidery since 2007, but it got a boost three years ago when Heritage Foundation of India, a Delhi-based organization, helped them promote the art.

They said that Jeevika, Bihar’s rural livelihood project, was the first to extend support to Sujini artisans over a decade ago, providing them work. “We started getting orders from Delhi and foreign customers after Asian Heritage Foundation joined hands with us to promote our work,” said Chandrani.

The women create artwork not only on women’s clothes and accessories such as sarees, salwars and scarves, but on men’s kurtas and T-shirts too. They embroider on household furnishings and accessories including bed sheets and covers for mobile phone and televisions.

Gudia Devi, who is also the coordinator of Sujini artisans in her village, said that they are no longer dependent on their husband for money. “What we earn is our own money and we are no longer helpless,” she said. ‘We can easily fulfill our dreams.”

Chandrani Choudhary, who is in her late 40s, said that Sujini has helped her break out of poverty and helped her be on her own. “Earning from Sujini would not have been possible a decade ago,” she told VillageSquare.in.

Tanushree and Diksha Kumari pursue a part-time undergraduate course that offers them flexibility with their classes. They embroider with a group of family members, relatives and neighbors during the day and study at night “We earn enough to fulfill our needs, and we can even spend on clothes and jewelry if we save,” said Diksha Kumari.

For Suman Devi, who leads a team of five women, Sujini embroidery has provided an opportunity for women to earn using the craft. “Sujini helps us work from home and be financially independent,” she told VillageSquare.in. “I earn Rs 3000 to Rs 5000 a month; it’s a big change.”

“It is a live example of socio-economic empowerment of rural women,” said Santosh Kumar Sonu, Jeevika district project manager of Muzaffarpur. “Together these women are earning in lakhs annually and they get respect and dignity out of it.”

The women are not only selling their Sujini embroidery on different clothes directly in the market, they get orders from local shops, showrooms in cities and different textile fairs. What surprises older villagers is that all these women and others like Aarti, Premkala and Reeta are now getting online orders.

Recently a team of girl students from Afghanistan visited Sarfuddinpur village to learn Sujini embroidery from the women. In recent years, several teams from abroad visited to watch the women execute the Sujini artwork.

In 2006, Sujini received a geographical indication (GI) tag. In 2019, women artisans from Bhusra village making Sujini embroidery got the UNESCO Seal of Excellence Award as a recognition and appreciation for their craft.

“As there is a demand for our work from outside India, foreigners regularly visit us to see us working,” said Gudia Devi. “Having heard about our work, a team from the World Bank also visited us and they were very impressed.”

The embroidery takes from five days to a month to complete, depending on the type of clothing, size of fabric and intricacy of design. “It requires a lot of attention to detail and deft fingers,” Urmila Devi, told VillageSquare.in. The women find it easier to work in groups, talking and listening to songs.

According to Sonu, the hard work and dedication of the craftswomen in Sarfuddinpur, Bhusra and a few other villages in Muzaffarpur have added to the international appeal. The women want to capitalize on the current interest and make a big name for Sujini, since many people have helped them revive the craft.

“In our effort to popularize Sujini embroidery in other parts of our country and abroad, we have become self-reliant and empowered,” Gudia Devi told Villagesquare.in.