Education and sports have helped the Lodhas, a particularly vulnerable tribal community that was forced to lead an excluded life because they were stigmatized as thieves, to increasingly join the mainstream 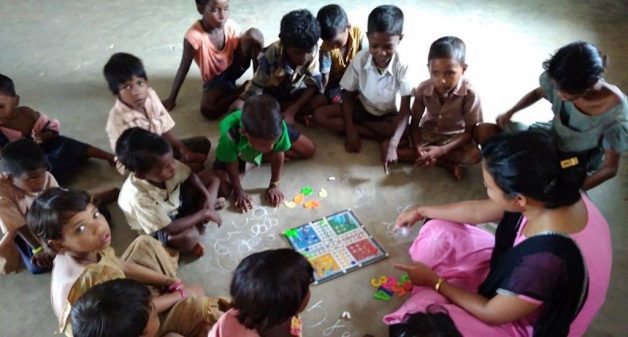 An education complex for denotified Lodha tribes has helped the children learn. Their performance has prompted reluctant parents to enroll their children (Photo by Rakhi Ghosh)

Bijay Nayak (31) brought his son Siba in his newly-bought motorcycle, to the education complex for Lodha tribal boys at Chikitamatia in Mayurbhanj district. In the last academic session, he enrolled his 6-year-old son in the residential school.

Siba is too young to be enrolled in a hostel, but Bijay Nayak feels that in residential school, Siba will live better and learn discipline and etiquette, difficult to acquire in their village. He said that Siba spent his time fishing and swimming in the village pond all through the day. “I want my son to study,” he said.

Just a few years ago, it was difficult for Bijay Nayak to run his family with his meager income. A seasonal migrant, he went to West Bengal and Jharkhand to work as a construction laborer. “I could barely earn Rs 5,000 per month as a laborer,” he said.

“Now I have a small grocery shop that helps me earn better and save for my children’s future,” Bijay Nayak told VillageSquare.in. He said that government had no schemes to provide food, books and uniforms to children when he was young. Poverty prevented him from going to school.

A de-notified tribe, now classified as a particularly vulnerable tribal group (PVTG), Lodhas were falsely accused of making a living out of robbery by British colonial masters, a stigma that continued in the years after India achieved independent. As a result, the tribe was forced out of the mainstream, living a secluded life. Some elements in the community took to crime in the absence of any other opportunity.

Now with government support, the tribal children have started getting educated, the youth have started mingling with other communities through sports and taking up jobs, in a step towards joining the mainstream.

Kala Chand (79), head of the Lodha community, said that in the 1960s, he and a few youth of his village Sansasal in Ukhalgadia panchayat were involved in robbery. They hid in nearby forests and distributed the looted money and valuables among themselves.

After he and most of his friends quit thieving, they still could not get jobs. It affected their livelihood, their children’s education and the family’s nutrition. They went back to robbery. Today, Kalachand has evolved as a leader, helping others lead a better life.

In 2016, Rajesh Patil, the then district collector of Mayurbhanj, asked Sikshasandhan, a not-for-profit organization working among the tribal children in Mayurbhanj district, to work jointly with the state government’s Lodha Development Agency and improve the quality of life of the tribes through education.

“Initially, it was not easy for us to work with the Lodha tribes. The tribes were living a life of seclusion since they had been branded as thieves and robbers ages ago,” said Anil Pradhan, head of the Naba Diganta, a project of Sikshasandhan, that works for the development of Lodhas.

“One of the de-notified tribes, Lodhas lack self-confidence and self-esteem and are addicted to alcohol. No other villagers were having any friendly relationship with them so in all parameters – health, education and livelihood – they were at a low position,” Pradhan told VillageSquare.in.

“It was a challenge to reach the 3,500-odd Lodhas scattered in eight villages of Shuliapada and Morada blocks in Mayurbhanj district,” said Pradhan. “But we decided to bring changes in their lives through education, sports and cultural activities to make them mingle with other communities and also to create livelihood opportunities, so that they can live with dignity.”

The Lodha children lacked hygiene and had no interest in sitting in a classroom and listen to the teacher. They were more interested in playing outside, fishing and swimming in the village pond and also venturing into the nearby forest. The parents too were not keen to send them to school.

When Sikshasandhan started their intervention at Tiansi Primary school in Barkand panchayat, 18 Lodha children were studying there. “In the classroom the teacher used to light incense sticks as the children were not in the habit of maintaining hygiene,” said Narayan Behera, program associate of Naba Diganta project. “The teachers were also not friendly with the Lodha students.”

“To create a healthy atmosphere in school we organized a feast, and song and dance programs. That helped the teacher and the students to develop a bond,” Behera told VillageSquare.in. “Later we gave the children soap and other toiletries, and after regular interaction, the children learnt to maintain hygiene.”

Children at the residential education complex for Lodha tribal boys at Chikitamatia was no different. A female support staff was appointed to improve the health and hygiene and discipline of students in primary classes.

“When I joined there were around 70 children of different age groups from Class 1 to 5, but they had no semblance of order and lacked interest in studies. They were not even taking bath and washing clothes. Now things have completely changed,” said Shantilata, the support staff-cum-care giver.

At present the residential school at Chikitamatia village is a completely different picture of what it was a year ago. The students were clean, disciplined and displayed their creative and academic skills.

Rinku Bhakta of Nedam village who has been in the education complex for a few years, finds this residential school better than his village school. “Earlier no one cared but now Shanti didi (the support staff) has taught us hygiene, etiquette and encourages us to do creative works,” Bhakta told VillageSquare.in.

Children of this education complex earn laurels at district level competitions. This has also helped increase students’ enrollment. Presently the school strength stands at 200. “Now parents are taking interest in enrolling their children and sending them regularly,” said Behera.

Ganga Nayak (18) is the first Lodha tribal girl who joined college this year after passing class 10 from her village. She got first division and proved her merits at Sargiphul, a state level competition for tribal children. Following her footsteps, young girls of her village and neighboring villages show interest in education.

“I want more girls from my community to continue education so that it will help them avoid early marriage,” said Ganga Nayak. She said that early marriage is highly prevalent in her community due to poverty and lack of education.

“Our main objective was to make the Lodhas mingle with people from other communities,” said Swagatika Bhuyan, project coordinator of Naba Diganta. “So, we decided to encourage youth towards sports. Since children in this district are interested in football, we encouraged them to form teams and play.”

After regular training by a coach, the youth formed 12 teams. This year two girls’ football team were also formed. To improve their self-esteem, courage and leadership quality, the organization facilitated a kukuda cup (hen cup) among youth, with the help of villagers. The winning team would get a hen as the prize and a feast would be organized.

“For the first time, we got the opportunity to play in a football team with youth from other communities. When people from our community cheer for us we feel proud. Earlier we used watch others play and cheered for them,” Basudev Naik, a college student and goal keeper of the football team, told VillageSquare.in.

The Lodha youth were addicted to country liquor. “When we asked them to attend a meeting, they wanted money for country liquor. We sent them to de-addiction centers and now most of the youths have overcome the habit,” said Sisir Samantray, program associate. “Now they are extending support to different activities.”

When alternate livelihoods with financial support were suggested, the Lodha youth readily agreed to set up businesses such as- grocery shop, goat rearing, rearing of country birds, shops to sell fish or meat or rice, etc.

Young women were also encouraged to participate in cultural activities. This increased their confidence and last year they performed at the Tribal Literary Festival at Kaptipada.

“When we conducted a study, we found that Lodha men were migrating due to lack of livelihood options. Some of them cultivate sabai grass but lack access to markets. We decided to provide them alternate livelihood options,” said Pradhan. Sabai grass is a natural fiber that has uses such as in the making of sturdy ropes, baskets and cots, in the paper and fiber industry, and in many handicraft items.

Babuli Mallick of Dhabani village, who was once a seasonal migrant, has set up a grocery shop this year, with financial and handholding support from Naba Diganta project. He earns Rs 500 per day.

“People of other communities are now buying from my shop and I am earning more than what I earned before. This has helped me buy a new motorcycle and save money in bank,”Babuli told VillageSquare.in. Today more than 70 youth have opened small businesses and migration has been checked.

The Lodha Development Agency that has been working for the development of this community since the 1980s is slowly effecting changes. A humanistic approach to the many government schemes for the welfare of the tribes will bring an overall development.