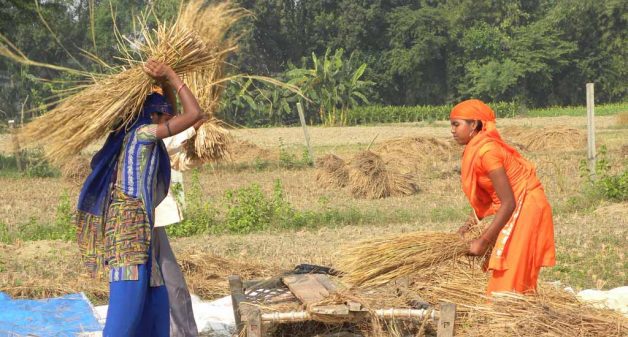 With men migrating for work, women do all the farming work, in addition to arduous household responsibilities of fetching water and firewood, leading to health risks (Photo by Jency Samuel)

Dense forests and hills of Dang district of southern Gujarat, once ruled by a tribal king, were converted into teak plantations by the British. The British brought Kokana and Bhil tribes from nearby areas to clear the forest and plant trees.

Dang is one of the most backward districts of Gujarat and the tribes are marginalized despite a unique cultural heritage and history. Limited road connectivity and commuting options in the rough mountains add hurdles to the development of the district.

The forest-dependent tribes adopted an agrarian lifestyle, but their farming methods are crude. Soil fertility as well as irrigation, are low. With limited livelihood options, seasonal migration among men is high. They take up agricultural and other unskilled labor work in neighboring Nashik district.

The tribal women have to manage the daily needs of the household and play multiple roles. The terrains make it difficult for them to bring water and firewood for the family, in addition to working in the farms. The arduous routine leads to health issues.

In mid-2018, exploratory fieldwork was done in Gundia, Sawarpada and Bhendmar villages, each in a different administrative block of Dang District. The objective was to understand the working condition of women and its impact on their health. From each village, seven tribal women from randomly selected households were interviewed.

Each woman works for about nine hours per day and in some seasons up to 14 hours, towards her family’s responsibilities. Top three time-consuming tasks of these women were farm work, for which they spend 4.38 hours, bringing firewood (1.9 hours) and fetching water, for which they spend 1.05 hours.

All these works are physically demanding and strenuous. Women have to do these chores daily, without a break. In the ranking of most difficult daily task, the top three were bringing firewood (66.66%), fetching water (42.85%) and farm work (42.85%) among the other tasks.

Provisioning water and firewood seems to be important concerns of these women. They typically depend on wells for water though recently a few hand pumps have been installed. But in dry seasons it is very difficult to get water.

These laborious tasks are likely to have an adverse effect on their health. The top three existing health complaints were low back pain (42.85%), knee pain (23.8%) and gynecological problems (19.05%). Overall, musculoskeletal problems had huge prevalence.

The figures indicate the living and health conditions of the tribal women. It is clear that they are affected by these daily hardships but they continue working since there is no other option. With husbands away and limited money in hand, they work hard to utilize whatever natural resources they have, to make ends meet.

Most of the women complained of some or the other joint pain. Eight out of 21 women interviewed said that they had taken medication for musculoskeletal pain in the last one year. With age, the musculoskeletal complaints increased.

Stopping the difficult works of everyday life and giving rest is the first step towards any treatment. Unfortunately, it is not possible for many. Proper orthopedic treatment and rehabilitation is a specialist care and most have no access and affordability for that.

In the districts, at many Primary Health Centers and Community Health Centers, there is a shortage of staff. Doctors, especially the specialists, do not prefer to stay in this relatively backward district with people of low-paying capacity.

Most of the women take rudimentary, symptomatic treatment when the pain becomes unbearable and soon they start working. Some said that they approach a PHC nurse without prescription and get a painkiller injection.

Many women had gynecological problems but they were too shy to talk about such problems. One-fifth of the women responded in the affirmative to questions related to gynecological issues. But the possibility of under-response cannot be ruled out as many were confused, felt awkward and paused before saying “No”.

Untreated gynecological infections along with repeated carrying of weights is a cause for vaginal prolapse. It is a taboo to speak about gynecological problems, and hence there is a need for health education and intervention. With limited access to specialist care, such problems increase, both in intensity and number.

It is already established that in rural and tribal areas, the prevalence of gynecological problems is very high, and health information related to menstrual and reproductive health is very low. Their burdensome daily schedule adds to this problem. Two of the 21 women said that they had taken medication for gynecological problems in the last one year.

For a better future

Basic amenities like water supply near the house and access to safe cooking fuel can improve the lives of women in rural Dang. Limited livelihood options, poverty, low socioeconomic status, discriminatory gender norms and the limited reach of public welfare schemes are the major hurdles for these women to enter the development surge.

These problems are similar to those in most of the difficult geographies. It is a challenge for development actors to evolve a multi-pronged intervention. Easing the lives of women will make their energy and time available for focusing on the future of their children, other livelihoods as well as their own health. Otherwise, it is very difficult to bring this community to the mainstream.

Though the situation is changing slowly with the action of a few NGOs and government schemes to improve access to electricity, water, LPG, etc., this community needs support in adapting to these facilities. Improving income is a prerequisite to making these basic amenities affordable.

This area is identified colloquially by kaag (crows), vaagh (tigers), saag (teak wood) and naag (snakes and the Nagli grain). However, backwardness is an identity that the Dang district can do without.

Abhijeet Jadhav and Palak Gosai are researchers at VikasAnvesh Foundation in Pune. Views are personal.