More than ten thousand tribal and Dalit small holder poultry farmers who had successfully built cooperative enterprise and escaped poverty, were forced to cull chickens due to rumors linking spread of coronavirus to chicken consumption 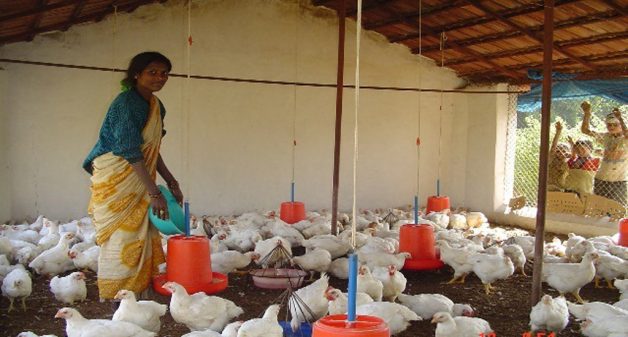 Kunti Dhurve is a small holder poultry producer from Jamundol village in Kesla administrative block of Hoshangabad District in Madhya Pradesh. Out of the total 15,000 households in Kesla, about 9,000 are tribal households. About 13% belong to the Scheduled Castes.

Kunti Dhurve is also the president of Kesla Poultry Society, a cooperative society formed in 2001. About 1,300 small holder poultry women farmers of tribal and Dalit communities from 47 villages of Hoshangabad and Betul districts of Madhya Pradesh are owner-members of this society.

In this part of Madhya Pradesh, road network is not well developed, with just over a quarter of the villages linked by all-weather roads. Agriculture is mostly rain-fed, with the farmers practicing rudimentary agricultural practices. In such a scenario, the women have been rearing chicken, with financial success.

Not many people are aware of the small holder farmers in the poultry sector. Indeed, a large number of households has been practicing backyard poultry i.e. rearing free-range Desi breeds of chicken.

In the last 20 years, there have been significant changes in the lives of the poultry farmers who own a small yet valuable bird count. This is distinct from the large, centralized, capital intensive poultry farms where at any time, the number of birds reared range from 1,00,000 to as high as 1 million.

Such poultry farms are prevalent in Punjab, Andhra Pradesh, Telangana and many other states. This article is NOT about these farms, but about women-run poultries, where they rear an average of 500 chickens.

National Smallholder Poultry Development Trust (NSPDT) organizes women into a cooperative, with each woman rearing around 400 to 600 broiler birds in poultry farms built in their homesteads. What she requires is just one cent of land (500 sq. ft.), that she owns or takes on lease.

Each woman spends two to three hours a day to clean the premises, feed the birds and provide water, and later to dispatch.

The cooperative provides day-old-chicks (DOCs) and other raw materials like poultry feed, medicines, and vaccines including production and marketing services to the members. The birds are ready for sale at the end of a cycle of 35 to 40 days. A woman farmer producer can take a minimum of six batches / cycles in a year.

The cooperative is designed in such a way as to allow seamless transition of non-producers (women who do not have prior experience of broiler poultry) into owners of small business, making them compete with large poultry farmers and sustain themselves in the commercial market.

Today more than 14,000 poultry producers are organized as 27 producers’ collectives (Cooperative Society/Producer Company) spread over 456 villages of 24 districts in the states of Madhya Pradesh, Jharkhand, Odisha, Assam and Maharashtra.

The intervention provides a woman with skills, infrastructure, inputs and marketing assurance for home-based broiler poultry rearing to the tune of Rs 40,000 to 60,000 per annum i.e. Rs 200 to 300 per day for a minimum of 200 days in a year.

The women have been able to overcome poverty through poultry. Till end of 2019, Dhurve was able to earn more than Rs 50,000 every year by rearing chicken for six cycles. This was almost 100% income enhancement. The work required minimal hours and offered work for 200 to 250 days a year.

Now that she gets this income, Dhurve does not need to travel in desperation, to remote places for subsistence, her three children missing school in the process. Now they attend a local school. She no longer borrows from money lenders.

The business activity has not only enhanced her income but has also increased the self–esteem and wellbeing of Dhurve and all the women members of the cooperative.

Beginning of 2020 brought bad news for the cooperative and its members. In January, rumors and fake news linking coronavirus and consumption of chicken started doing the rounds in the market. Actually healthy food and diet are necessary in times of medical emergencies.

The misconceptions and rumors resulted in drastic fall in demand and thus a huge blow to the small holder farmers, almost leading to a collapse of her entire business. Unfounded apprehensions of a few miscreants fueled a dramatic slide in the overall business environment.

There was a sharp decline in demand for chicken. The prices went southwards. The wholesale prices which were in the range of Rs 70 to 80 per kg in 2019 declined sharply to Rs 5 to 10 per kg. But the production costs remained at Rs 75.

The scenario was so hopeless that the women could hardly manage to sell some birds at throwaway prices. They were forced to cull the rest of the birds. A dream that took 10-plus years to build was shattered almost overnight.

Till December 2019, turnover of the 27 producer collectives was Rs 508.65 crore, making this the largest such enterprise of tribal and Dalit women. But with the COVID-19 misconception leading to losses, the women are looking to the government and philanthropic agencies for support.

While the micro-level impact is palpable, there is also a huge loss for the promoting institution NSPDT that assiduously built over the last 20 years, a value chain that kept interests of the small poultry owners at the center. That entire value chain has suffered a huge setback.

For Dhurve and other women, there is a danger of sliding back into the poverty trap that they had escaped. Would this mean that she will be forced to go to her early days of drudgery when the only regular income was from loading sand in the local sand mines that got her Rs 100 per day?

She would be away the full day, children would go uncared for and the deficit in income would be bridged only by a loan from a local money lender at an interest rate of 10% or more per month. Similar would be the situation of most of the women poultry farmers of the collective.

Deepak Tushir did his graduation in zoology from Delhi University and completed his MBA from Amrita University, Coimbatore in 2011. Since then he has been associated with National Smallholder Poultry Development Trust, Bhopal.

Ajit Kanitkar is a senior advisor at VikasAnvesh Foundation, Pune. Prior to this, he worked at Ford Foundation and Swiss Agency for Development and Cooperation, both in New Delhi. He has also taught at Institute of Rural Management, Anand. Views are personal.