Handcrafting of wooden dhows is on a decline, as the ancient cargo vessels have become redundant. Government plans to include dhows in tourism to revive the craft 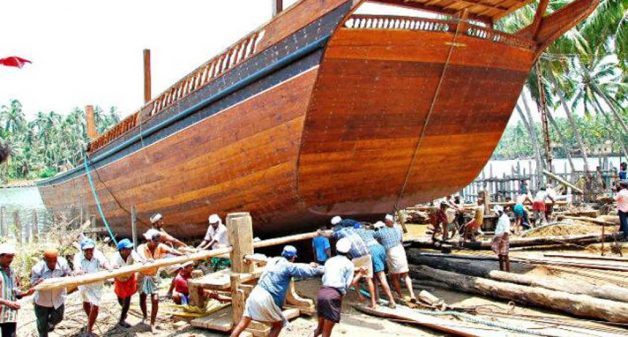 Beypore, a coastal village in Kozhikode district in northern Kerala is famous for uru, the handcrafted dhows; uru in Malayalam means fat boat. The wooden ships are the biggest known handcrafted vessels in the world, the craft being practiced in Beypore for centuries.

Urus made Beypore famous right from the time India’s maritime trade with Mesopotamia started. Arabs used the dhows for trade in the olden days. Yemeni traders, who settled in Kerala centuries ago, had mastered the craft of making dhows. They passed on the unique craft to carpenters of this sleepy village.

While uru making flourished for centuries, it has been on a decline for decades. With the Arabs’ renewed interest in dhows as luxury vessels, and government’s revival plan, the master carpenters hope for better prospects.

“This time-tested craft is known only to the craftsmen here. This is an exceptional yet undocumented process passed down through generations. There are no sketches, plans, drawings or blueprints. The artisans learn the techniques by practicing the craft with the experienced carpenters,” said Rajan Beypore, a businessman and son of renowned uru maker M. P. Andikkutty.

“Just like how it was before my late father’s time, it is all in the mind of the master carpenter,” Rajan Beypore told VillageSquare.in. “He gives instructions to his workforce on a daily basis to prevent the technique from being copied.” Uru is made completely of wood, using indigenous tools like country saw, chisel and wooden hammer.

Tiles, wood and spices were transported to Bombay and Calcutta ports and also to foreign countries from Malabar, through waterways in the 15th and 16th centuries. Uru, the dhow, was the only means of transport used in those days to carry the cargo.

In the 17th and 18th centuries, Arabs used the dhow to transport Nilambur teak, the timber known for its quality, from Kallai shores on a regular basis. From the time when Vasco Da Gama reached Kappad in Kozhikode in 1498, Kerala’s trade relations with foreign countries further prospered.

Zamorins, who ruled North Kerala then, encouraged this craft wholeheartedly and used the dhows to strengthen their navy. “We can call uru an Arabian trading vessel as Arab traders were among the main patrons of this handicraft,” said Ali, an experienced hand in making uru.

The beat of local tools on timber, heard from the yards and sheds were the identity of the quiet village for centuries. “Though uru making started in Kozhikode port, rough seas there made it difficult and the artisans from Beypore started making the vessels in the banks of Chaliyar River flowing between Beypore and Chaliyam,” Ali told VillageSquare.in.

“There were times when more than 1,000 workers making dhows was a common sight. We had master uru makers like Andikkutty, Thamukkutty, Chandhukkutty, Imbichi and Narayanan in Beypore in the post-independence period. It was the golden era of Beypore as far as dhow-making was concerned,” said Rajan Beypore.

The artisans’ mastery over the craft attracted many Arab merchants to Beypore. They flew to Mumbai and contacted leading contractors like Barami and P. I. group. The contractors coordinated between the Arab buyers and the local dhow makers.

But the prosperity did not last long. In the 1980s, laborers started strikes demanding on-job safety, provident fund, insurance, etc. It led to shortage of workers, eventually leading to less or no orders for new dhows. Slowly the business declined.

“Later when the masters got orders, they shifted to Mangalore area and started work with local laborers there,” said Rajan Beypore. “Because Mangalore Port is viable, with comparatively flexible laws, availability of manpower and lesser wages.”

The work in Mangalore continued for about 20 years, after which they returned to Beypore. “An uru of 75 feet length and 100 feet height will take 18 to 24 months to complete and approximate production cost is Rs 3 crore. The volume determines its carriage capacity in tons,” said Koya, manager, P. I. Group.

Uru is custom made. Teak is the main wood used in uru making. Rosewood and jackfruit timber are used for designing the interiors. Now Malaysian Teak is being used commonly to reduce the cost.

Large planks are chiseled and shaped, then joined together without using metal nails or screws. Later, the carpenters screw the planks with steel or copper bolts to build the base (keel). Lac and cotton are used to fill the joints to avoid leakage.

Immense workforce is needed in the whole process. Khalasis, known for their weightlifting skills, are the traditional dockyard workers who lift and shift heavy wooden planks to the field and push the huge uru to the water after completion, using pulley and iron rope. They sing songs while lifting or moving planks.

“An uru will last for three to four generations,” Sathyan, an uru maker told VillageSquare.in. “This durability shows the quality of materials and workmanship. That’s why the cost is also high.”

Carpenters, sawmill workers, burumas who drill bolt holes and kalpathis who join the wooden skeleton are the others involve in uru making. Presently lack of skilled labor is the main difficulty that industry faces. “The technique may end with this generation,” said Sathyan.

Though a Heritage Study Centre was started to offer training in uru making, there has hardly been any progress. Introduction of fiber boats has also resulted in decreasing interest in the dhows. Scarcity of wood is also a problem, as this industry need a lot of wood.

There were times when hundreds of families were directly involved in uru making. Introduction of cargo flights, ships and a good network of roads facilitating road transport has also made the dhows redundant, according to Rajan Beypore.

However, in recent times, the role of uru has changed from that of a cargo vessel. For Arabs, owning a uru has become a prestige symbol. Qatar is the main market for Beypore urus now. They use this as floating restaurant or luxury yacht.

“A large number of handicraft shops sell miniatures of uru. This is a major small scale industry in Beypore. Intricate miniatures and painstakingly assembled miniature ships in bottles are the main attractions here,” said Krishnan, who sells handicrafts.

State tourism department plans to promote uru tourism by showcasing North Malabar culinary delights and art forms for the tourists while they enjoy a ride through the backwaters. It would also preserve the disappearing traditional skill of uru making.