Creating awareness about mangrove and seagrass ecosystems among coastal communities, and facilitating additional income for them, a marine scientist involves them in conservation 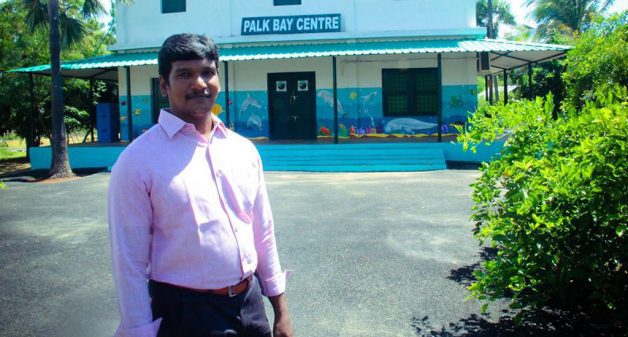 Fisherman Rajendran (54) eloquently names various species of mangrove saplings he planted in Keezhathottam village in north Palk Bay in Tamil Nadu, Palk Bay being a 15,000 sq km biodiversity hotspot on India’s southeast coast. He knows which mangrove species can withstand a storm; and he knows which fishes and squids thrive in a mangrove forest.

These men and other fishers in north Palk Bay have a good understanding of the local marine ecosystems like the mangroves and the seagrass and how they impact their life and livelihood. It has been the consistent efforts of Vedharajan Balaji over the last decade that have converted the fishermen in the region to grassroots conservationists.

Balaji had his first encounter with the underwater world at the age of 18. A few traditional fisherman took him to explore the underwater scene in Somnathapatina of Thanjavur district. Hooked, the student even created an underwater camera with a tin box and a small fish tank to document the sea life there.

During his college days, Balaji volunteered with a local non-governmental organization where he interacted closely with coastal communities. This gave him an opportunity to understand the everyday challenges that they faced at sea.

After completing his masters in marine biology in 2002, he took a 1,200 km motorbike expedition along the southeast coast of India to further understand the interaction between the coastal communities and the sea.

“The journey changed my life. I wanted to spread awareness about mangrove, seagrass and coral reef ecosystems that protect the coastline and marine life,” Balaji told VillageSquare.in. “I printed pamphlets and distributed them in schools and panchayat meetings and shared my messages.”

The interaction also enabled young Balaji to gain practical knowledge about the fishing communities and the marine life along the southeast coast of India. From the fishermen, he got first-hand information on the many species that were slowly disappearing from the seas.

“For instance, a fish called sudhumbu in local parlance was traditionally given as a nutritional supplement to pregnant women, but the fish had begun to vanish from our seas as the freshwater they bred in decreased,” said Balaji.

Though he continued spreading awareness about the importance of conserving these three marine ecosystems through workshops and seminars, it was the tsunami in 2004 that gave a major impetus for his message, as people realized the value of mangroves as a bio-shield.

While doing his doctoral research on seagrass, Balaji continued to work with the forest department and local communities to plant mangroves in Palk Bay. In 2007, he decided to go on a trip again and this time, he chose to go by the sea.

With self-taught knowledge, he kayaked  for 600 km, from Rameswaram to Chennai, along the east coast, to spread the word about conserving marine ecosystems and promoting sustainable fishing. “Facing the sea alone was completely different. If not for the local fishermen who helped me ride the waves or understand the direction of the wind, it would have been impossible for me to survive such a trip,” he said.

He would paddle for 5 to 7 hours every day and then come back to the coast to talk about conserving marine ecosystems, to the residents of the village that he landed in. He networked with the fishermen and convinced them to report sightings of marine mammals like the bottlenose dolphin, whales etc. Slowly these fishermen started aiding the forest department in rescuing and reporting stranded marine mammals like the endangered dugongs (sea cows).

It was during the kayaking expedition he realized that though people knew about mangroves and coral reefs, there was very little discourse about the equally crucial albeit quickly vanishing seagrass ecosystem. The seagrass meadows play a critical role in protecting the coast from rising tides and also in hosting several marine species like the dugongs.

Balaji did an acoustic survey of the seagrass ecosystem in Palk Bay and later used GIS tool to map the seagrass and mangroves in the region. This came in handy when he took up conservation of these ecosystems later. Every time Balaji pursued research, he ensured that the science served its purpose on the ground and the locals were in the know.

“When we got a project to artificially restore seagrass in Palk Bay, we trained the local women to grow the seagrass plugs in a frame and got the fishermen to dive and put the plugs in select sites,” said Balaji. “It was important to get the locals involved as they took ownership of the planted seagrass and they could experience firsthand how marine life flourished around the seagrass ecosystem.”

“Similar to reverting to organic farming, there is a need for us to go back to traditional, small scale and sustainable fishing techniques,” said Balaji. “Unfortunately, these small fishers are the most vulnerable in our community. So, we help them with alternate livelihoods options like livestock rearing or organic farming to prevent overfishing.”

Apart from planting close to 75,000 mangrove saplings with the help of fishers in the villages of Palk Bay, OMCAR Foundation has also reached out to nearly 60,000 students to further marine conservation.

Balaji believes that any conversation on conservation would make no sense without getting the coastal communities involved. Even as large fishing trawlers threaten to destroy the sensitive marine ecosystems and along with it, endangered species like dugong, Balaji pins his hope on the traditional fishermen to restore the balance.