With no increase in tiger count, tribes continue to be relocated

Will the post-pandemic government be more responsible and responsive?

COVID-19 crisis showed how government can work with zeal and efficiency. It will be a welcome outcome of the pandemic If the momentum continues in the new normal 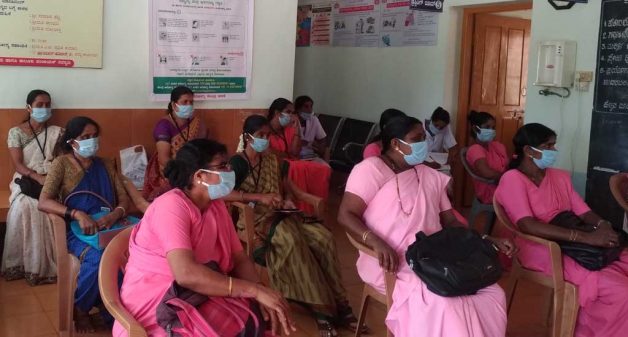 It would be a TINARG moment in the post-pandemic scenario if government continues to work with the same efficiency (Photo courtesy: SARC Karnataka)

Social media as well as the mainstream media are abuzz with many inspiring stories of COVID-19 warriors from non-profit / citizen sectors and the stupendous work that they are doing across the country. There are hundreds of individuals and organizations acting on their own, fuelled by their own motivation, compassion, sympathy, altruism and empathy, reaching out to help fellow citizens suffering in this pandemic.

In the current reporting, on the social media at least, on respective roles and contributions of sarkar, bazaar and samaj (state, market and the civil society), the samaj is being projected as the ultimate saviors of those who have been forgotten by the state.

The state is portrayed as lacking in vision, oblivious to the plight of millions, announcing administrative measures that are devoid of any sensitivity; the list of allegations can go on. It is the state that is receiving the flak from all quarters and the samaj or the representatives of the samaj that is getting bouquets for its relentless work. The state is demonized for its inaction!

This note is not to underestimate the contribution of the civil society. It is indeed valuable and exemplary. This write-up is about the role of the state, in calamities like this and the future that we are going to face.

Many years ago, there was this talk of the TINA factor, There Is No Alternative (TINA). This was used in the Delhi media and later picked up by all the media persons in political discourses, about lack of real choice for citizens in choosing political alternatives during election campaigns.

In the TINA discourse, the political commentators argued the inevitability of choosing not the best option but a suboptimal option because the other options were equally unworthy to consider. The choice was actually one of last resort and not the best one!

TINAG: TINA to the government

In the current context of COVID-19, what has become clear is that there is the TINAG factor – there is no alternative to the government – and its extended arms all across the country. The government is fighting many heroic battles, the same government that many of us including this author, deride on abandoning its responsibilities in normal times. But this is not a normal time and we are seeing a new government machinery in action.

In April and May, we heard thirty stories from fellows posted in the aspirational districts. The Transformation of Aspirational Districts Program is a government initiative to transform districts that are lagging in certain development parameters.

These case studies compiled as Part I and Part II, highlighted the thankless tasks that government staff are performing across many districts, in most hostile conditions and with severe resource crunch. Their names do not get highlighted as they are not into national media briefing every day.

In district after district, the administration and the officers improvised on existing scant resources. For instance, an apparel park was switched to stich over 50,000 masks that came handy for the entire state in the initial days of the pandemic.

The administration in some areas set up helplines that responded to migrant workers stranded in remote locations. They ensured that the migrants got the necessary logistic support through the helpline that was set up overnight. Community kitchens were set up that fed thousands while other NGOs managed a few hundred. The same loath district administration in many of these places swung into action with initiative and a sense of purpose.

While the news of transfer of a municipal commissioner of Mumbai or an administrator of a civil hospital in Pune becomes the national headline, the real action of preventing the spread of COVID-19 is happening in these districts.

There comes the TINAG – there is no alternative to government – in these godforsaken places. Yes, the administration there has collaborated with citizens; the reach and the muscle power, that they have is in no way comparable to the often meager resources and reach of the citizen sector even in these times of spontaneous action. They are dealing with thousands of citizens each and every day with no end in sight.

One wishes that the zeal and accuracy with which the state is tracking each and every infected COVID-19 patient, is shown in tracking lakhs of migrant workers stranded on the road, stuck on railway platforms and bus stations and at interstate boundaries, malnourished children half fed in rural slums and children left out of schools.

Can the same administration start MGNREGS worksites with the same speed at which they opened kitchens for migrant workers? Would the same responsiveness shown in distributing masks and PPE kits to remote locations in rural hinterlands be shown in dealing with cases of violence against women?

We have seen in the last two months that when there is a calamity, and if the government has a will, it can actually track to the last details when it comes to identifying, treating and rescuing patients affected with the virus. COVID-19 has made the government add that R to the TINAG factor – a responsible and a responsive government.

A new normal for the state? A TINARG?

Everyone is talking about a post-COVID-19 new normal. It will be a minimalistic lifestyle, decentralized economy, more cohesive families, digitally delivered education, compassionate capitalism and whatnot. Post-COVID-19, whenever that time comes, and one hopes that it comes soon all across the country, do we see a hope of a new normal for the state, that one can call it a TINARG factor?

Will we see the emergence of a more responsible government, responsible to the stated and unstated needs of its citizens? Only if such concern, care, speed and responsiveness that is shown during COVID-19 times, can become a new normal for the state, then one would be happy to acknowledge that there is a TINARG! If that happens, that would certainly be a wonderful consequence of and a long awaited gift to the citizens of this country at the end of this most dreaded disease.

Ajit Kanitkar is a senior advisor at VikasAnvesh Foundation, Pune. Prior to this, he worked at Ford Foundation and Swiss Agency for Development and Cooperation, both in New Delhi. He has also taught at Institute of Rural Management, Anand.