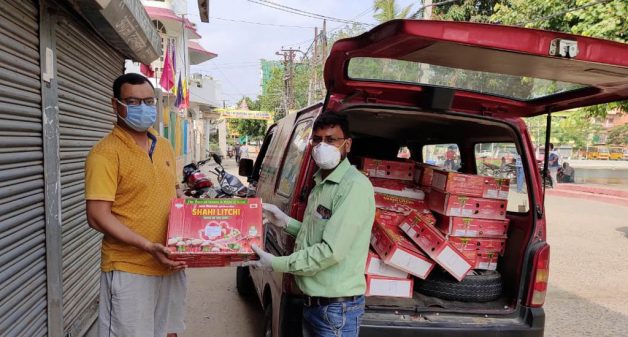 It was the third week of May, the ripening season of litchi fruit in Muzaffarpur in Bihar. Like any farmer in the country, farmers of Muzaffarpur too were anxious, since the lockdown amidst COVID-19 pandemic had severely affected agricultural operations.

Farmers of Muzaffarpur had a more pressing reason to be worried. Their litchi fruits were almost ready to be harvested, but there was hardly any buyer, and it was not possible for them to send the fruits out of town for sale because of the lockdown. If the fruits were not harvested within a fortnight, they would be of no use.

Amidst the crisis, baag se ghar tak (farm-to-home), a joint initiative between the Directorate of Horticulture and India Post, helped members of Muraul Farmer Producer Company (FPC) of the Muraul administrative block of Muzaffarpur take their produce directly to consumers, helping both get a good deal.

Popularly known as shahi litchi, the cultivar of litchi (Litchi chinensis) has a geographical indication (GI) tag, and is mainly grown in Muzaffarpur and surrounding districts of Vaishali, East Champaran and Samastipur. This variety is known for its juicy pulp, rosy fragrance, round shape and unique sweetness. Of the 32,000 hectares of land under litchi cultivation in Bihar, about 12,000 hectares are in Muzaffarpur district.

Bihar grows 40% of the litchi produced in the country. Almost 60% of litchi farmers in Bihar are small farmers, having landholding of less than two hectares. Every year Bihar does business for about Rs 1,000 crore by selling 15 lakh tons of litchi, 40% of which is sold outside the state, mainly in metros like Delhi, Mumbai, and Kolkata.

Muraul FPC was incorporated in 2018 as part of Bihar Agriculture Growth and Reform Initiative (BAGRI), a state government initiative to improve access to markets. The FPC has been marketing wheat and maize, and selling agri-inputs among members, though on a small scale. Of the 3,600 member farmers, around 300 grow litchi.

When the COVID-19 pandemic and the lockdown halted the FPC’s plans about collective marketing and processing of litchi, they approached the Directorate of Horticulture for help. They sought the directorate’s intervention to help farmers market litchi, the flagship fruit of Bihar, during the lockdown.

“Telangana government’s idea to tie up with India Post prompted us to explore the same. Though Bihar is an entirely different market, India Post responded positively and fast,” said Nand Kishor. As a pilot, the sale of litchi was restricted to Muzaffarpur, as it is the production hub, and Patna, the state capital. For online orders, the department created a webpage in its website.

After discussions, representatives of India Post, Muraul FPC, BAGRI and Directorate of Horticulture decided that they would take online orders for 10 tons of litchi. This being the first time the initiative was taken up, the stakeholders decided to start small, and hence restricted the volume to 10 tons.

Based on the current selling price, the team decided that the selling rate to the consumers would be Rs 100 per kg if the farm procurement price was fixed at Rs 60 per kg. Even after spending Rs 32 per kg for handling and transportation, the farmers were able to get a better price.

“It’s so nice to get such a good price even during the lockdown,” said Abha Kumari, a young litchi farmer of Muraul village. The selling price for the litchis at farm level has previously been in the range of Rs 30 to 35 per kg, while this year through the FPC, the litchi farmers got a price of Rs 55 per kg.

Scientists from ICAR National Research Center on Litchi provided technical advice on variety and quality of the fruit, apt time and techniques of harvesting, and packaging of the produce. The Directorate of Horticulture provided the packaging materials.

The assurance to supply tree-ripened litchi at consumers’ doorstep has been the unique selling proposition for this initiative. The directorate announced the delivery period as 25 May to 15 June, for the benefit of consumers booking orders online.

Workers started plucking from 7 am and continued till 5 pm, with a break during the day to avoid the scorching sunlight. All the workers were given instructions on measures to prevent the spread of coronavirus. The workers packed the litchis in boxes of 2 kg each and stacked the boxes at the farm gate.

India post collected the packages in small commercial vehicles at the farm. By 6 pm the vehicles loaded with fruits reached the Railway Mail Service office in Muzaffarpur. From there India Post transported the boxes in bigger vehicles to the General Post Office (GPO) in Patna. The vehicle reached Patna usually between 11 pm and midnight. At Patna GPO, the packets were segregated as per the locality of order.

Next morning the boxes were taken in smaller India Post vehicles for distribution in respective postal limits. BAGRI personnel ensured that the boxes were distributed in the city as per the orders received, besides collection of cash on delivery. The partnership with India Post helped in smooth transportation despite restrictions on vehicular movements during the lockdown.

As soon as the payments by the customers were recorded, customers received a message on their mobile phone, with a link to provide feedback about the quality of product and packaging. Further, local officers of the department also made phone calls to randomly selected customers for their feedback.

“Though we plan to do a detailed analysis of feedback of all the stakeholders, initial analysis of the feedback of the customers have been very encouraging,” said Deo Narayan Mahto, deputy director of Directorate of Horticulture.

The success of the initiative can be gauged from the 90 quintal order received during a 15-day period. “When we asked a customer for feedback, he said he’d give 110 on 100,” said Jay Prakash Ray, chief executive officer of the FPC.

About 65 quintals of litchi of 30 farmers from five panchayats in Muzaffarpur reached almost 900 consumers. A business of Rs 28 lakh was done within a week starting from 25 May. The directorate had to stop taking orders as the demand was more than expected.

A new supply system planned according to the situation and a very small window for marketing the fruit were the impediments. However, this experiment of collaborations and connecting farmers directly to consumers has left the Directorate of Horticulture and other stakeholders with much positive learning for the future.

“We are happy and we are exploring many options to strengthen the supply chain further and make it more efficient and sustainable. We have already started discussing how to further reduce the cost and time between harvesting and delivery, and increase the farmers’ revenue,” said Nand Kishor.

The Directorate of Horticulture of Bihar is happy, since the farmers could sell their produce at a good price and consumers could get their seasonal local favorite fruit fresh from the farm at a very reasonable price. “Such work requires teamwork, and it worked for us,” said Kishor, acknowledging political and institutional support.

Litchi growing member farmers could register a sale for Rs 6 lakh. “This was a good initiative. We got good price. This effort should be increased,” said Virendar, a middle-aged farmer of Simra village, who has been growing litchi for the past several years.

The directorate is planning to scale the initiative so as to connect the farmers directly with consumers, avoiding middlemen, for better price realization and also to strengthen the brand of shahi litchi of Bihar. The other idea is to establish government-certified stores at major places in different cities, Patna to begin with, for selling fresh fruits and vegetables procured directly from farmers.

Leading farmers in the state have also approached the directorate to scale the initiative to reach more farmers for a variety of agricultural produce. Meticulous planning and implementation helped the farm-to-home scheme work better than envisioned. It needs to be seen if the learnings and experiences are replicated in the days to come.

Amrita Dhiman is an assistant professor at Development Management Institute (DMI), Patna. She has worked in corporate and development sector for almost a decade before joining DMI. Niraj Kumar is professor and dean at DMI, Patna. He has taught at Xavier Institute of Management, Bhubaneswar, and Indian Institute of Forest Management (IIFM), Bhopal. Views are personal.