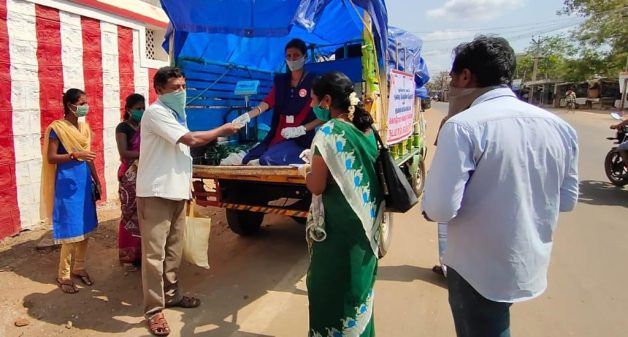 In villages, the nationwide lockdown threw up many challenges for farmers and entrepreneurs. Villages in Pudukkottai district in Tamil Nadu faced similar challenges.

Farmer producer organizations aggregate produce such as vegetables, maize, groundnuts, milk, etc. of their member farmers and sell, to maximize profit. But the lockdown posed challenges in reaching the regular markets.

To overcome the issues, farmer producer companies took special permission for transportation and took their produce for sale directly to consumers. This prevented wastage of produce, helped their member farmers earn and also gave consumers access to vegetables and essential items.

Ambuliaaru APCL decided to bridge the gap. They sought permission for relaxation in vehicular movement, to transport essential goods. They gained the confidence of authorities in the district administration through regular interaction. With the assurance that they would diligently follow safety norms, they obtained permission.

They procured brinjal, bitter gourd, okra, snake gourd, drumstick, tomatoes and other vegetables from the farmers, took the same in vans to sell to individual households. If vegetables were in limited supply or were not available, APCL bought them from nearby local markets and supplied to the customers.

By approaching consumers directly, Ambuliaaru APCL sold about 7,000 kg of vegetables in a month, benefitting 1,092 farmers. From its member farmers, it also bought 15.6 tons of groundnut, worth Rs 7.91 lakh.

The lockdown coincided with the sowing season for groundnut. But the input shops were closed and the farmers could not purchase groundnut seeds. Ambuliaaru APCL made arrangements to procure 178 bags of groundnut seeds, each bag weighing 40 kg, from a regular supplier in a town that is more than 80 km away.

Ambuliaaru APCL not only arranged for good quality groundnut seeds, they supplied the same at a minimum price to member farmers. While the retail price is Rs 3,000 per bag, the FPC supplied at Rs 2,800 per bag. The total purchase of groundnut seeds amounted to more than Rs 5.5 lakh.

The shutdown of local shops led to a sharp increase in the prices of cattle feed. Livestock farmers struggled, as the cattle feed that cost Rs 1,400 per bag of 50 kg, was being sold at Rs 1,600 during the lockdown. Karambakudi Pasumai Agriculture Producer Company Limited in Vettanviduthi village, having 583 shareholders, decided to produce cattle feed.

As it is a mechanized process, the FPC decided to utilize the production units. They arranged for raw materials such as black gram husk and maize from farmers. It takes six hours to produce 1,000 kg of cattle feed. They were able to produce the required quantity.

The FPC sold the feed at Rs 1,350 per bag, Rs 50 less than the pre-lockdown market price. They also delivered the feed at the farmers’ doorsteps. In the lockdown period, till the first half of May, they did business for Rs 73,100. Apart from cattle feed, Karambakudi Pasumai APCL has also been involved in the sale of vegetables, groceries and maize.

“When most of the shops were closed and we couldn’t buy groundnut seeds, our company arranged for good quality seeds and even delivered the seeds at our doorstep,” said Vanitha, a member of Mukkanicholai Agriculture Producer Company Limited. “It helped me sow at the right time.”

Members of the Ambuliaaru APCL sold groundnut oil and coconut oil, extracted in their own units, through the vans that transported vegetables. The total turnover through the sale of oils was Rs 14,307, which benefitted 61 farmers.

Ambuliaaru APCL offered additional services by purchasing essentials such as spices and pulses from authorized local wholesale markets and selling them along with the vegetables. Sale of these items helped around 100 farmers make an additional income.

Mukkanicholai Agriculture Producer Company Limited in Koolayankadu village, has 790 shareholders. In this FPC, during the lockdown period, the members continued with their dairy work and distributed milk.

MAPCL also arranged for groundnut seeds for its members. The farmers harvested paddy during the lockdown, and sold a total of 343 kg of rice, resulting in business worth over Rs 20 lakh. A very important highlight across the three FPCs is the remarkable number of women shareholders — about 90% of members in each FPC consists of women shareholders.

Shocked that they were spending a lot on alcohol, Kailashnagar residents resolved to quit and wore special necklace to show their resolve (Photo by Azeem Mirza)

Appalled by the lakhs they spent on alcohol, residents of a village vow to never touch liquor again. They turn their village into a successful organic model