With no signs of the coronavirus infection abating, moringa farmers in Tamil Nadu use the increasing demand for natural immunity boosters to their advantage, by value addition 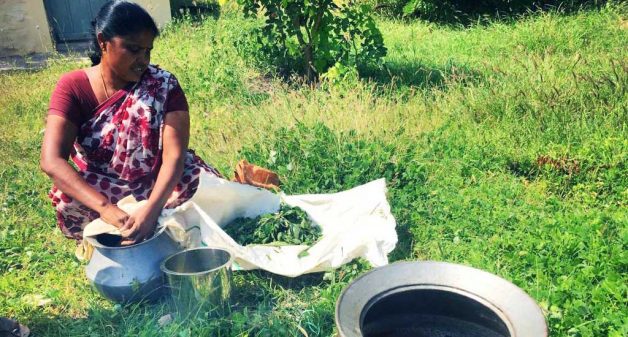 As Tamil Nadu fights an uphill battle against coronavirus, with 52,759 confirmed cases, as on 07 August 2020, there has been an increased demand from the public for natural immunity boosters such as turmeric and moringa.

Karur Moringa and Vegetable Farmers Producer Company Limited, a farmers’ collective in Lingamanayakkanpatti in Karur district has seized this opportunity to promote moringa in a way that appeals to the Indian palate. From moringa dhal powder, moringa chutney and moringa jaggery balls to the basic moringa oil or leaf powder, the farmers have tried to make their product a kitchen staple.

The farmer producer company has also ramped up production of their other immunity booster products like noni syrup, seenthil (Tinospora cordifolia), etc. As the coronavirus infection and lockdown make it tough for small businesses across the country to survive, this farmers’ collective not only survives but thrives.

“Also known as the Ben oil, moringa oil has a huge market in the anti-ageing cosmetics industry also. With governments across the world promoting its usage for its immunity boosting properties, there’s been an increase in our customer base despite the lockdown challenges,” 26-year-old Meivanan told VillageSquare.in.

“The minute there was a relaxation in lockdown and courier services started operating, we had several orders for our moringa products, especially from cities like Chennai,” said Mohana Balasubramani (45), the company’s administrative head.

53-year-old Saroja Kumar, managing director of this farmers’ collective comes from a family of farmers. “There was a time when Karur farmers grew food crops like pearl millet or sorghum. But with water scarcity and with rice replacing traditional millets, most farmers in the district took to drought-tolerant moringa or to livestock farming,” she said.

“Exactly 10 years back, with groundwater hitting an all-time low, many farmers in our neighborhood chose to give up farming altogether and that was when I ventured into it,” Saroja Kumar told VillageSquare.in. Inspired by agri-scientist Nammalvar, a proponent of organic farming, she decided to take the organic route to revive her water-deprived land.

Kumar chose to use only one acre for growing moringa whilst creating a food forest in the remaining five acres. With a forest-farm model requiring less maintenance and water, she had more time to focus on the real challenge of marketing their products.

She recalled that they have had to deal with extreme price fluctuation while selling moringa or its seeds. While the vegetable could sell for Rs 2 per kg, the seeds which were sold to other firms gave no respite to the farmers.

“From Rs 1,200 per kg, I have seen the price of moringa seeds go down to a paltry Rs 100 per kg this year,” Shobika Perumal, one of the directors of the company, told VillageSquare.in. “But as a collective, now we fix the price.”

“Most of our customers buy regularly from us and the marketing has been primarily through word-of-mouth. At present, with no cure in sight for coronavirus, people have started using immunity boosting products like ours on a large scale,” she said. They not only market their products through social media, but share healthy recipes that use native herbs and ingredients.

“Our primary product is moringa oil, a derivative from moringa seeds, which we sell directly to the customer at a fixed price of Rs 5,000 per liter,” said Shobika Perumal. “This ensures that the farmers are not let down by a fluctuating market.”

It was Saroja Kumar, who pioneered promoting moringa oil as a standalone edible product. Few years ago, when she had tons of unsold stock, she decided to mill the moringa seeds and produce oil instead.

“Initially, people were scared that it might be poisonous; so we tested it on ourselves. After using the oil and experiencing its benefits, we decided to sell it to customers as Rs 500 per 100 ml,” she told VillageSquare.in.

With reverse migration to villages happening across the country, she opined that rural youth could use this opportunity to focus on value addition of agri products and marketing.

In 2016, when National Bank for Agriculture and Rural Development (NABARD) wanted to initiate a moringa-based farmer producer company, Saroja Kumar was chosen to spearhead the initiative. The Karur Moringa and Vegetable Farmers Producer Company Limited now works with 320 farmers across 15 villages.

The members try to simplify processes. “When we wanted to dry the moringa leaves we decided to dry bunches in the clothesline outside our home and after few days, the leaves were crisp enough to be powdered,” said Kumar. “We use the powdered leaves to make tea dust, soup powder and other ready-to-eat products like chutney, moringa jaggery balls, etc.”

“We have a wide range of products based on what each of us can create and deliver, ranging from idli podi, sweet balls to moringa soaps,” said Shobika Perumal. “Based on market demands, we have also ventured into other millet-based products and a unique herbal soap range.”

Farmer Lalitha Saravanan (42) has been working with the company as a director for the past two years. She said that having a farmer producer company closer home has enabled many women like her to go beyond just growing the crop. They are now decision makers and have a say in fixing the price of their produce.

She grows moringa, brinjal, castor, etc. and has a pulse on emerging markets. “Do you know that there’s been a sudden surge in the demand for seenthil as it is said to be one of the ingredients in making kabasura kudineer, an immunity boosting drink promoted by the Tamil Nadu government,” she said.

She hopes that the government would promote local and native products like theirs, through rations shops of the public distribution system, government child care centers, etc. “Why not sell moringa oil instead of imported palm oil in our ration shops?,” she said. She believes that it would help local economy.