Marketing their vegetables posing a challenge, Bhagalpur farmers made little money despite favorable agro-climatic conditions. Switching to strawberry cultivation and direct marketing have turned their fortunes 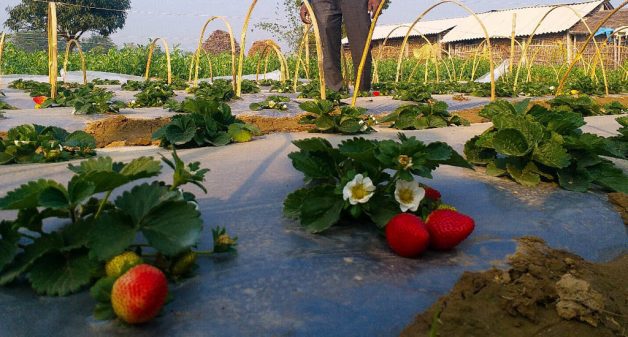 Growing strawberries and marketing them directly to consumers has increased the income of farmers in Usmanpur, Bihar (Photo by Ram Datt)

When we think of juicy strawberries, the picturesque Mahabaleshwar in Maharashtra or contoured farms of Himachal Pradesh come to mind. Nobody would imagine a nondescript village in Bihar. But Usmanpur in Bhagalpur district of Bihar has become the hub of strawberry cultivation.

Situated on the bank of River Ganga, Usmanpur village has fertile soil and a well-developed irrigation system. The farmers were interested and experienced in commercial farming. They cultivated crops like cabbage, cauliflower, brinjal, okra, pointed guard, carrot, radish and other seasonal vegetables.

However, marketing remained a major problem for them, and they could not get a remunerative price for their produce. The village had 200 farming households with an average landholding of one hectare. The annual income of the farmers varied between Rs 20,000 and 85,000.

In early 2018, Bihar Agricultural University (BAU) in Sabour selected Usmanpur as one of the villages to be part of a project funded by Australia-India Council. The objective was to understand the farming practices and suggest mechanisms for increasing the income of local farmers. The project that recommended strawberry cultivation, has helped farmers earn in multiples of their earlier income.

After a detailed survey of the agro-climatic condition and farmers’ interest, the BAU project team decided to recommend cultivation of strawberry to the farmers. “We knew that strawberry is exotic for the farmers in this part of the country, and farmers would not accept our recommendation easily,” said Shambhu Prasad, a BAU scientist and a member of the project team.

“However, considering their competencies in farming and nature of the local market, we concluded that only such disruptive recommendations could deliver the desired outcome and can give farmers the type of returns they were expecting,” Shambhu Prasad told VillageSquare.in.

As expected, as soon as the project team made the recommendation, farmers rejected the idea. Most of the farmers had not heard of or seen strawberries. However, BAU’s extension team was ready with their multi-pronged strategy.

The team members conducted many meetings for small groups of farmers, to explain the potential of the crop. To motivate them further, the team arranged for video shows of strawberry cultivation and held group discussions, following the screening. The team also focused on three resourceful farmers who seemed interested in experimenting.

“Frankly, in the beginning, no one was interested. However, when the team members explained and promised help during the entire cultivation period, I decided to try it,” Khagesh Mandel (33), who owns 1.2 ha of land told VillageSquare.in. “After two more fellow villagers decided to try, my confidence increased.”

in November 2018, 1,500 runners of two different varieties, namely, Nabila and Camaroja strawberry procured from Siliguri in West Bengal were planted in the fields of the three farmers. The project team decided to use the three fields as demonstration plots and provided all the required advisory services during the entire crop duration.

As the project team was aware of the problem of marketing that the farmers in the area faced, they decided to negotiate the sale of harvested strawberry at the pre-decided price of Rs 200 per kg with a local agri-entrepreneur. In the local retail market, strawberry was being sold at the rate of Rs 350 – 400 per kg.

At the end of the season, each farmer could earn a net profit of Rs 4.5 to 5.0 lakh per acre of land. “We were surprised with the profit and the ease with which our produce got sold at the farm gate itself,” Dhananjay Mandal, one of the three farmers, told VillageSquare.in.

Buoyed by the results of the demonstration, next year, while the three farmers decided to put a larger chunk of their lands under strawberry cultivation, few more farmers of their villages decided to try this exotic crop on their field as well.

This time the team could buy runners from Siliguri at a cheaper rate as they were buying more quantity. All the farmers had bumper harvests, and so were their profit. However, the most critical outcome was the visit of thousands of self-help group members and farmers to know and see the techniques and potential of growing this new crop.

On the third year, many more farmers joined the bandwagon, and existing farmers continued to increase the area under this crop. Strawberry plants are tender and require soft handling. As the area under the crop had swelled considerably, manual irrigation became arduous.

Purchasing a drip irrigation facility was not on the farmers’ agenda. Though subsidy for drip irrigation was available, it would have taken time. The innovative farmers bought pipes from other farmers who had purchased for some other crops but were not able to use them. They manipulated the existing system to suit their needs, and their innovation worked.

Farmers were getting creative in their approach. As soon as the harvesting time arrived, farmers decided to do away with the middlemen to save the commission which middlemen charged, and to increase their profit margin.

They coined a slogan khet se seedhe thaali mein (from the field to the plate) and did the branding of their produce as the ‘local and fresh strawberry’ and packed the fruits in boxes of 2 kg each. BAU’s team helped with the branding and packaging.

The farmers developed communication materials that were circulated on social media and phone messaging applications. With many local people sharing the farmers’ messages, local media covered the farmers’ initiative.

Farmers started packaging and selling at consumers’ doorsteps. Bikas Mandal, one of the farmers, echoed the feelings of farmers when he said, “We will grow, and we will sell as well”. “If we continue to do this and everything goes in our favor, getting a profit of Rs 5 to 6 lakh per acre is not difficult,” he told VillageSquare.in.

“Seeing is believing” is doing magic, as more farmers from adjoining villages and districts wish to cultivate strawberry. “Though the crop is very resource intensive, we are getting queries and requests from an increasing number of farmers for growing strawberry,” said R. K. Sohane, Director – Extension, BAU.

“Another very positive outcome is that even smaller farmers are making queries for the cultivation of high-value fruits like papaya,” R. K. Sohane told VillageSquare.in.

Farmers have found other sources of runners of an improved variety and are exploring the possibilities of procuring it from Pune for their next crop. Based on their experience, they are also thinking of new markets and avenues of marketing.

Patna, the state capital and Kolkata are two markets they are currently targeting. “Strawberry cultivation has completely changed our farming. Now we think of the market before we grow a crop, whereas earlier we used to grow the crop and then looked for the market,” said Bikas Mandal.

BAU is happy that their project could bring the desired change. Local customers are happy as they get locally grown exotic fruit at a cheaper rate. The farmers are the happiest because they not only learnt to grow strawberry but also understood the concept of profitable farming. No doubt, farmers can learn and innovate. And their innovations work.

Ram Datt is an assistant professor of Extension Education at Bihar Agriculture University, Sabour, Bihar. He works extensively in the field of grassroots innovations. His online courses on agri-entrepreneurship are popular. Niraj Kumar is senior professor and dean at Development Management Institute, Patna. He has taught at Xavier Institute of Management, Bhubaneswar, and Indian Institute of Forest Management (IIFM), Bhopal. Views are personal.