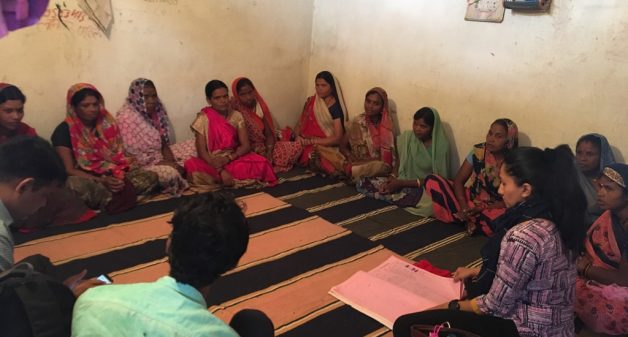 Varsha, a Amullakhurd village resident in her late teens, was interested in joining her village self-help group. Her husband stopped her from joining. “He failed to understand why collectives were being formed. He thought that it is something wrongful and I shouldn’t be given the freedom to choose,” she recalled.

Priya was not allowed to pursue her education beyond class VIII because her family felt that it was not safe for girls to travel alone beyond the village. Cases similar to Varsha and Priya abound in Amullakhurd village of Khaknagar tehsil.

Lalitabai, a community resource person with Aga Khan Rural Support Program (India), recalled the women joining together to convince Varsha’s husband to allow her to be a member of the SHG, though he was verbally abusing them.

It took a long time to bring the women of Amullakhurd together, convince them and their families and form a self-help group (SHG). Once they did, the women members are slowly becoming empowered with new skills towards financial independence and social responsibilities.

As the Amullakhurd women like Varsha and Priya had to take care of the household, they had no way of earning money to supplement the husband’s income. The economic backwardness aggravated the situation and stressed out the women, since many had to borrow to buy food essentials.

The women felt the need to have income-generating options. Joining hands with the SHG in Navra, a neighboring village, the women bought sewing machines and started a training center so that women could learn tailoring. The training center is located in the panchayat office.

SHG members of Navra and Amullakhurd get trained at the center. In addition to saving and animal husbandry work that some took up through the SHG, tailoring helps them earn that they no longer have to take credit to buy food. Some have even started paying for their children’s education.

Amidst these situations, the villagers faced difficulty in accessing primary healthcare facilities. “There is a hospital in Haidarpur village which is about 5 km away, but there was no staff,” said Manda, one of the SHG members. The villagers relied on self-medication. “For delivery or emergencies, we had to go to the tehsil.”

Though the tehsil hospital is 20 km away, it took the villagers more than 45 minutes to reach because of the poor condition of the roads. The SHG women repeatedly met the authorities. Due to their efforts, the Haidarpur village hospital has been properly equipped with facilities and staff.

Amullakhurd village had three functioning hand pumps, which was not sufficient to meet the needs of the entire village with a population of 1,400. The women decided to get the issue sorted out as they need water to sustain their livelihood.

“At a point of time, only two pumps yielded water, but no one took turns to pump water,” recalled Sunita. “Because of that those who pumped first got more water, and we had to manage with less or wait for long for the bore to recharge.”

The women made a representation at the panchayat. When the panchayat took no action, they complained to higher authorities. Then they took out a rally with empty vessels, to demonstrate their plight. “We faced problems more than in other villages,” said Nanda, one of the SHG members. “Right from cooking to getting water for our cattle, it’s a very fundamental need, which we have now resolved.”

To show for the women’s initiative in taking up the issue with authorities, there are nine hand pumps today. The panchayat has fixed motor to a bore well. The two open wells that were in disuse have also been restored.

Palak Gosai manages VillageSquare and is a researcher at VikasAnvesh Foundation, Pune. Views are personal.