Women get a second chance to complete education

Girls who had dropped out because of lack of access to schools and early marriage have enrolled in a program, so as to complete education 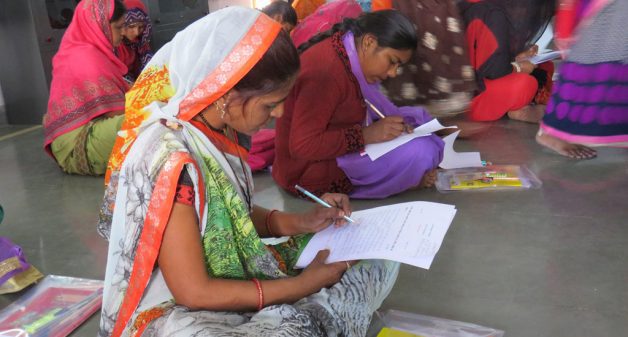 Second Chance, an education program, is helping many women who had dropped out of school complete their school education (Photo courtesy Manjari Foundation)

Udi Bai, a 35–year-old resident of Biliya village in Chittorgarh district was excited to appear in her class X examination. She had dropped out of school 23 years ago when she got married. She has two children. Her family is engaged in agriculture.

Mamta Solanki (24) and Solanki’s widowed mother Meena Kanwar (43), are residents of Kishanganj village in Baran district. They have enrolled themselves for class X exam under National Institute of Open Schooling (NIOS).

Udi Bai and Solanki are among hundreds of women who had dropped out of school due to their circumstances. Now they have enrolled in an education program so that they can complete their matriculation studies and examination.

As per a latest base line study done in Baran, Chittorgarh and Jaisalmer districts under Second Chance education program supported by UN WOMEN, 7.06% girls drop out at primary school level, 5.17% at upper primary and 15.25 % girls drop out during higher education.

Lack of access to schools, poverty, parents’ illiteracy, early marriage and household responsibilities are some of the reasons that force young girls to drop out. Dropout rates among students belonging to SC/ST communities in all program districts is high.

Rural communities in Rajasthan still believe that girls should get married when they are in their late teens. As per Census 2011, in Rajasthan, 4% girls are married at the age of 10 years, 20% between 10 and 15 years of age and 63% when they are between 16 and 18, which is very high in comparison to national average.

Meena Kanwar, a widow with two children, works as cook at a mid-day meal center, earning Rs 2,000 per month. Meena could not continue her education beyond class VII. Now Kanwar and her daughter Mamta Solanki have enrolled as students, unmindful of villagers ridiculing them.

Pramila Karmakar (24), who had dropped out of school when she was in class V, has enrolled in class X now. She works as a maid for a salary of Rs 5,000 a month, and takes care of her widowed mother.

Similar to Kanwar, Solanki and Karmakar, over a period of seven months, 919 young women and girls have enrolled for continuing their education. Of those who have enrolled, women belonging to Other Backward Castes and Scheduled Caste category form the majority.

The gap in education discontinuity varies from two years to 23 years. As per enrollment data at Manjari Foundation, an implementation partner and NIOS registration data, those who resume after a gap of 3 to 5 years make up the most, at 28.51%.

Women’s enrollment started with the beginning of Second Chance Education and Vocational Learning Program (SCE) which aims to empower and reintegrate dropout young girls and women in the education system.

THE SCE project is being implemented in select areas of four states, namely, Bihar, Maharashtra, Odisha and Rajasthan. United Nation Women (India) is the funding partner for the SCE program. NGO partners are implementing it.

As per the project work plan enrolment of women through NIOS and other available avenues is the starting point, so that the women can access higher education. Identification of open education platform, online courses, remedial classes based on need, etc. are the follow-up activities.

When she received the study kit after enrollment, Pramila Karmakar became emotional. She said that motivation to study towards a better future drives her. She is optimistic that she will succeed. 16-year-old Muskan has also enrolled, after seeing her friends do.

As data shows, women are eager to continue their education. But there is need for more affirmative actions from the government and other stakeholders. Compromised teaching quality, limited access to high schools and colleges, early marriage and affordability need to be addressed. Fixing suitable timing, and removing financial barriers would also help the women.

Women and girls who had dropped out of school were mobilized through awareness campaigns and meetings with parents. They were keen to continue their education and wanted to be identified as matriculates.

Naresh Nain is the program director at Manjari Foundation, and based at Udaipur. He has been practicing in the development sector, after completing development studies in Wageningen University, Netherlands. Views are personal.