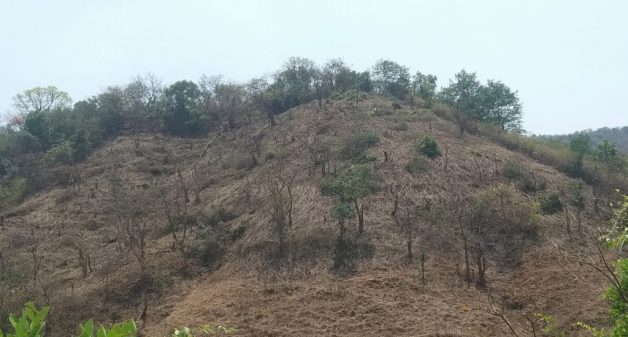 Slash-and-burn or shifting cultivation, called as jhum or jhoo, is being practiced in India for a long time. It is majorly practiced in the northeastern states and some parts of south India.Though not known much to outsiders, communities have been practicing it in the deep Sahyadri mountain ranges for generations.

In the Sahyadri mountain ranges of western Maharashtra, many villages that are on the outskirts of Pune city are involved in traditional agricultural practices. Though at an average distance of about 55 km from Pune, the mountain villages have not seen much development – apart from electricity, and a mud road that was laid recently.

The villages supply labor to run the economy of Pune city and other small towns. While the youth migrate for work, the older family members continue to practice traditional agriculture.

The younger generation with some literacy level prefers to stay in the city and take up manual/private jobs. The older generation with minimal or no education and attachments to the villages, prefer to remain in the village and work either as a daily wage laborer or keep doing their subsistence agricultural practices that are not environment-friendly.

The farmers are involved primarily in growing rice crop as it is one of the areas in the country that gets heavy rains. For various reasons, innovation in agriculture is lacking in this region. Rise in land prices is also one of the factors that spurs farmers into selling their land and continue the traditional way of agriculture.

Interactions with the younger generation revealed that they were not keen to take up farming because of lack of interest and because they find agriculture becoming financially unsustainable.

In the hot summer of April, Rambhau. B, who is in his late 40s, along with a few workers was busy cutting down trees on the mountain. He would cut down trees in one to two acres on the mountain slope, where his family would cultivate traditional grains such as finger millet, barnyard millet and black sesame.The bhakari (roti)made from millets is essential to their diet, as it has been to their ancestors.

Many farmers such as Rambhau, living in the valley and on the mountains, practice shifting cultivation. “First we select a mountain slope that is dense with trees. Then we cut the trees. After they dry, we burn them,” he told VillageSquare.in. “Then the area is cleared and ready to be sowed before the monsoon.”

In the vernacular language of the region, this method of farming is called shet. However, at times the termcould mean regular farming too. People from all social backgrounds practice shifting cultivation, in addition to cultivating paddy.

Dagadu. M, another farmer who has been doing this kind of farming on and off for the last 60 years said, “Our farming method takes a lot of hard work and dedication.” After sowing and until harvest, they remove weeds and keep pruning the trees that start growing back.

The land that they choose does not generally belong to the forest department or the farmers. Most of the land belong to third parties and seldom the locals. After the harvest, the land is mostly left fallow. Though the mountain slopes appear barren, after about 15 years, trees cover the slopes again.

Farmers make sure that the forest is grown fully before they start farming again. A dense tree cover would indicate that the land is good and haven’t been touched for some time. Further, dense forest will provide a lot of firewood for cooking and other purposes and the ash will be good for the crops.

The Maval region, which includes Maval, Mulashi, Bhor and Velhe administrative blocks of Pune district, is well-known for paddy cultivation. These blocks fall in the Sahyadri mountain ranges which get a lot of monsoon rain, helping the farmers grow paddy.

But the majority of rice cultivation is done through traditional method, which is unsustainable. “In rice cultivation, first we create the beds,” Tukaram, a farmer, told VillageSquare.in. The farmers cut tree branches that are left to dry for a month or two.

They prepare beds of dried branches and cover the same with crop residue and cow dung. It takes about 30 days for the branches and leaves to become completely dry. Then the farmers burn them, in preparation for sowing seeds.

They sow paddy seeds on the bed after the arrival of the first monsoon. When the rice saplings grow knee high, the farmers replant the saplings in the field,” Vitthal. M, a farmer, told VillageSquare.in. Women’s contribution is significant in this mountain farming, as they carry out most of the work.

The features of slash and burn agriculture are common to global civilizations from ancient time. It is believed when the biomass is burnt, it converts into nutrient-rich ash. Furthermore, burning biomass is believed to help in nitrogen fixing, besides killing the weeds and pests in the area.

Short Rotation Coppice or SRC is a method of cutting fast-growing trees that can sprout from the stumps left behind. The trees are harvested in a relatively short time period, generally between two and six years. The farmers of Sahyadris follow SRC, in preparation of rice cultivation.

“Research tells us that SRC and other methods of sustainably growing rice have been helpful in increasing the yield,” Balu. K, one of the villagers, told VillageSquare.in. “But using chemicals and fertilizers such as urea is very common among the mountain farmers.”

But the consequences of slash–and-burn farming are huge. First, there is a rapid decline in the forest cover. When the trees are cut down, the entire area is cleared of trees as well as bushes, including medicinal plants and old growth trees.

The trees are allowed to grow after the crop is harvested but the lost tree cover takes years to recover fully. The mountain slope trees are essential in holding the soil. The roots thus play an important role in controlling soil erosion.

When the trees on the mountain slopes are cut down, the soil is loosened and lost with the monsoon rain and eventually the soil flows down the river. The third negative consequence of the overall burning, namely smoke, is not enough given attention.

The smoke is responsible for releasing carbon dioxide, carbon monoxide, particulate matter, and polycyclic aromatic hydrocarbons into the atmosphere according to A.D. Kambis and J.S. Levine, authors of the book ‘Biomass burning and the production of carbon dioxide: a numerical study’. The dioxins released into the environment are also harmful to humans.

The governments all over the world including states in the northeast have implemented policies to not practice shifting cultivation precisely for these reasons. It is necessary for the government to study and measure the ecological and environmental impact of slash-and-burn agricultural practice.

A generational gap is evident among the younger and the older inhabitants of rural western Maharashtra. The young would like to work in the formal or informal sector in cities. They see it as a better option for their kids to get educated and have a better future.

The income from traditional agriculture is not enough to sustain the family. The villagers who do practice agriculture, keep chickens and livestock for dairy and meat products. Older people are interested in continuing what their forefathers did. Those who show some interest in practicing modern farming expect immediate results and give up.

There are some people who want to pursue modern farming seriously but due to lack of training and support they are unable to. There is a need for awareness campaigns among farmers and a need to gain the trust of farmers, so they shift to modern farming, which is affordable and profitable.