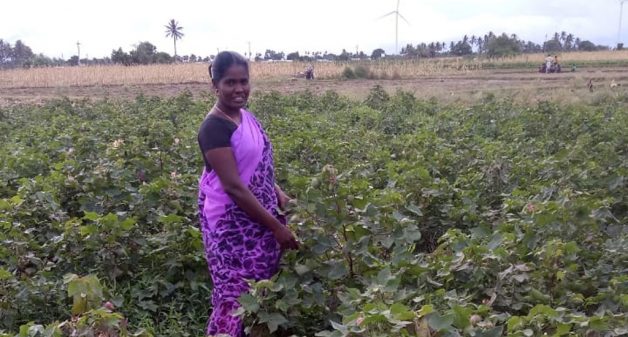 Nagalakshmi weaves baskets and earns double of what she earned rolling beedis. Hailing from Tirunelveli of Tamil Nadu, where beedi rolling is a way of life for many women from poor households, Nagalakshmi (52), found it difficult to sustain on the meager income from beedi rolling.

In 1993, she earned Rs 6 for rolling 500 beedis. Though she wanted to quit beedi rolling, she could not, because of circumstances. “Then my sister-in-law introduced me to basket weaving, Initially I could weave only three baskets a day but now I weave 10,” said Nagalakshmi.

Living alone in a dilapidated thatched hut in Mangaluru’s Ashok Nagar, Jayanthi (76), can barely get up from her bed. Yet, working four hours every day, she rolls 1,000 beedis a week, and earns Rs 180 per week.

Rolling beedis for the past 60 years, earlier Jayanthi could roll 800 to 1,000 a day. It has taken a toll on her health – her movement is restricted, her eyesight is poor, her back and hands ache.  A major part of her earnings is spent on medicines. Her neighbors bring the raw material from the contractor and deliver the finished products.

Despite spending all her life rolling beedis, Jayanthi has not received any social benefits except a monthly pension of Rs 500, as she holds a beedi card that identifies her as a beedi roller. Many like Jayanti wish to quit beedi rolling, but cannot, as they do not know how else to make a living.

Beedi rolling is generally done by the poor from backward areas, where there is no sustainable employment. Highest share of women in the beedi workforce is found in Andhra Pradesh (95%), Karnataka (91%), Tamil Nadu (84%) and West Bengal (84%).

A majority in the unorganized sector is paid very low wages. In the organized sector, 1% of the women are paid monthly, the rest on a piece-rate basis. In most parts of India, they are paid Rs 66.81 on an average per 1,000 beedis against the prescribed minimum of Rs 72.94.

Condition of women workers is aggravated since they do not have job contracts. About 98% in the unorganized sector, and 80% of the women in the organized sector have no contracts, indicating unprotected employment.

The study found a daily wage gap of Rs 140 between women (Rs 126) and men (Rs 266) workers in registered beedi firms at the national level. In the unorganized sector, 94% of the women are not eligible for any social security benefits, compared to 47% in the organized sector.

However, the beedi manufacturers earn huge profits. In 2017-18, the domestic consumption of beedi was 260 billion sticks  or 10.4 billion packets, which was worth Rs 156 billion and earned the government a revenue of Rs 25 billion. Yet, this most common tobacco smoking product in India remains largely untaxed.

“As owners make huge profit, the government must form a clear guideline on wage parity, protection mechanism, while assessing the impact of home-based beedi rolling on the worker, her children and family as immediate short term measures,” said Sachi Satapathy, the study’s lead researcher. Experts advise that contractors’ role must be redefined to promote workers’ interest.

The study found that ease of work (17.5%) was the most important factor which made them continue rolling beedis. Some of the women lack confidence and in some cases social /religious restrictions do not permit them to step out of their house.

Convenience of working from home with domestic responsibilities (14.6%), difficulty in undertaking new jobs (12.4%) and long years of experience in beedi rolling (10.2%) were the major reasons.

The AFDC study showed that their attempts to shift to more rewarding livelihoods was met with obstacles such as low education, inadequate skill adaptability, credit availability and lack of in-demand vocational training. “Government should focus of skill development for those working in hazardous conditions,” said Satapathy.

In 2019, out of nearly 5 million in the country, 2,223 women beedi rollers underwent training for alternative jobs. Among them, only 1,025 actually shifted to alternate jobs, said a statement from Ministry of Labor and Employment, to a question in Parliament in December 2019.

After 24 years of rolling beedis Jebamani. T (42), of Kengeri village in Karnataka, quit after developing eye pain, body ache and breathing issues. Her beedi card entitles her to a pension but she is reluctant to go back to beedi rolling.

Her card entitles her to the small company clinic, which is not equipped to handle her issues. So she visits private clinics, spending Rs 300 to Rs 500 on medicines each month. The study found that a majority of women spend an average Rs 7,248 a year on medical expenses, about 29.2% of their beedi rolling income.

“Medical expenditure on work-related illnesses far outweighs their earnings from beedi rolling. There is a strong need for the government to declare home-based beedi rolling as hazardous,” said Sachi Satapathy.

“These workers are constantly exposed to dust and other dangerous chemicals like nitrosamines, which are readily absorbed through skin, respiratory epithelium and mucous membrane of mouth, nose and intestine,” said Tariq Mahmood, professor and head of department of pulmonary medicine, MLN Medical College, Prayagraj.

According to him, the exposure to tobacco dust affects respiratory tracts in humans. “Fatigue is one of the common symptoms,” said Mahmood. “All women beedi rollers must be screened for asthma, tuberculosis in a quarter.”

Jebamani takes up Mahatma Gandhi National Rural Employment Guarantee Scheme (MGNREGS) work for 15 days in a month or two and earns Rs 180 a day. “Rest of the days I do agricultural labor work, earning Rs 200 a day,” she said.

“I rolled beedis for 20 years. My health doesn’t permit me anymore. Although MGNREGS is not permanent, it is not as back-breaking as beedi rolling. Those who quit find MGNREGS and agricultural labor work,” said Rani. S (38), from Tamil Nadu.

in Kengeri, like Zubeida,  many have joined garment factory and earn about Rs 12,000 monthly. Field studies in Karnataka and Tamil Nadu show that women who adopted alternative professions earn more (Rs 58,431 per year) than those who continue to roll beedis.

Agricultural laborers like Jebamani earn an average of Rs 27,891 per year, while non-agricultural workers earn an average of Rs 72,660. Average earning was the highest amongst self-employed women at Rs 1,20,708 per year. Share of income from alternative occupation is significantly higher than share of beedi rolling income in the total family income.

In a first, about 1,200 women beedi rollers from Karnataka and Tamil Nadu were trained in jackfruit cultivation, papad making, tailoring, garment stitching, pickle making, vegetable vending, baking poultry, etc. Most of them earned about four times more. There have been a few similar interventions.