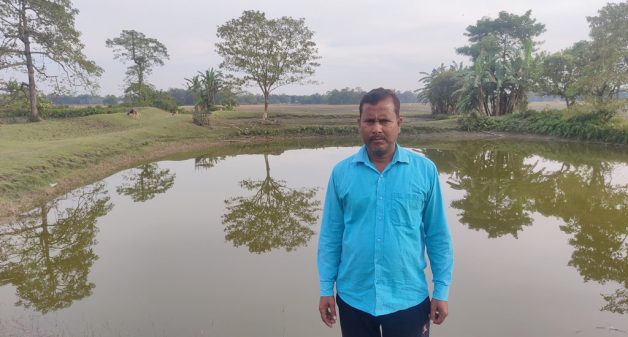 Nityo Gopal Sarkar who resides at Khagribari village in Cooch Behar district of West Bengal had worked as a laborer in Haryana and other northern states of the country for nearly two decades before returning home two years ago.

The 58-year-old decided to return home as advancing age made it difficult for him to continue the physical labor involved in his work. On return, he thought of doing farming in his land in the village but shortage of water during summers made him apprehensive. But when he returned, a completely different picture awaited him.

Like Sarkar many villagers used to migrate to other states to look for alternate employment, since they could not practice agriculture without water. Restoration of water bodies has led to an increase in water level in the village, leading to reverse migration and cultivation of multiple crops.

Water crisis had been a major problem for the Khagribari’s residents, particularly farmers, during the dry season. The situation had forced them to migrate for livelihood.

The positive change began in 2011 when the village with 1,686 households was chosen among the 121 villages across the country for a pilot project on climate-smart agriculture under National Innovation on Climate Resilient Agriculture (NICRA) by the central government.

“The village was chosen because it had good potential for agriculture due to abundant rainfall but lacked water retention. So, farmers migrated to neighboring states and country like Bhutan for livelihood,” said Sankar Saha, agronomy expert at Uttar Banga Krishi Vigyan Kendra (UB KVK) and in charge of the project.

Despite having an abundant rainfall of around 3,500 mm annually, Khagribari faced water shortage because of the lack of water retention capacity. The ponds were too shallow to hold water.

“We increased the depth of the ponds to around 9 feet so that the water can be retained in ponds and supplied through pipes in fields,” Saha told VillageSquare.in. Under the project, 24 existing water bodies, mostly ponds, were restored. Three new ponds were dug.

“The availability of water also helped farmers to take up fishing,” said Saha. The changes became visible. In 2011, the total cultivated area of the village stood at 534 hectares, of which 68% was rain fed. But in 2018, the dependency on rain got reduced and just 55% area was rain fed in Khagribari.

When he returned, Nityo Gopal Sarkar found that the farmers of his village Khagribari were growing multiple crops due to abundant supply of water throughout the year. He decided to go ahead with his plan of farming.

“I was surprised to see farmers growing various crops; earlier it was restricted to paddy during monsoon and jute, as the latter doesn’t require much water,” he told VillageSquare.in, while sowing garlic in his field. Apart from paddy and jute, he grows potatoes, tomatoes, okra and other vegetables.

Sarkar is not alone. Availability of ample water in the village ponds has inspired many youth like Bidhan Burman (28), who has completed post-graduation, to take up farming rather than migrate in search of livelihood.

Burman aspired to become a teacher in a government school and move to the city, but failed to realize his dream. “I was disappointed that I didn’t get a government job. I looked for a job in private schools too but didn’t succeed,” he said. “I then decided to start farming my father’s land, after sitting idle for a few months.”

The presence of water not only enabled him to grow more crops per year, but also helped him grow fish in the pond. “I am happy as the farming and fishing collectively fetches me around Rs 25,000 per month. At the same time, I do not have to leave my family.”

The availability of water has made the villagers less dependent on the neighboring forest for livelihood. Surrounded by the dense Rasamati forest, the villagers used to venture regularly inside the forest for timber and firewood, putting their lives at risk due to the presence wild animals while also causing environmental degradation.

“The forest has bison, python and other wild animals but we had no option but to venture inside for cutting wood, which we then sold in the market. We knew that it was ruining the environment but we had no option during the dry months when there was no other source of livelihood,” said Ajit Sarkar, secretary of Village Climate Risk Management Committee (VCRM).

A group of villagers makes up the VCRM team that supervises the maintenance of ponds and prospects of agriculture. “The situation was such that the forest had been destroyed thrice in the past by the locals who were heavily dependent on it,” Ajit Sarkar told VillageSquare.in.

“But the renovation of ponds has changed the scenario. Water availability has reduced our dependence on the forest and lessened the risk to our lives,” he said. “The farmers try to save the forest with the hope of attracting tourists and creating fresh avenues of livelihood.”

UB KVK has provided the farmers with Swarna Sub-1 (SS-1), the submergence tolerant variety of paddy that can stay in water for 15 days without getting destroyed. It produces up to 3.5 tons per hectare when submerged, which can go up to six tons in normal conditions.

“We used to face losses during heavy rainfall as paddy got affected while remaining in water for a longer duration. But the problem was solved with SS-1 variety,” said farmer Bikramjit Sardar (42).  “We were also given a short duration crop of 125 days, compared to the previous 150-day crop. It’s helped us save time and grow more crops.”

“A lot of work requires to be done as several farmers are growing paddy and jute because all the ponds in the village are yet to be restored.  The water bodies should be made deeper to ensure that other farmers also benefit,” he told VillageSquare.in.

Conceding the difficulties faced by the farmers, the officials at UBKVK said, that more ponds would be renovated soon. “The village has a vast area and the existing ponds also need regular maintenance,” said Saha. “We are in the process of renovating more and also digging new ponds.”