Development eluded two remote Irula tribal villages in Western Ghats. Through Tribal Sub-Plan being implemented, they hope to revive agriculture that once kept them self-sufficient 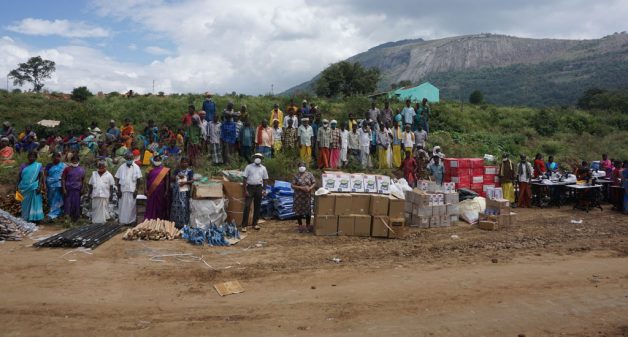 The arrival of a truck load of materials in October, 2020 brightened the forlorn faces of the Adivasis in Dhoomanur and Sembukarai, Irula tribal settlements. The truck was from the Sugarcane Breeding Institute, Coimbatore, which had recently identified the two remote hamlets for implementing the Tribal Sub-Plan (TSP) program.

Off the Coimbatore-Manarkad road, an 8 km ride across seven hills, on the bumpy, winding way into the reserve forest takes one to Dhoomanur and Sembukarai on the foot of Western Ghats in Coimbatore district, close to Kerala border.

The main hamlet Dhoomanur is at an elevation of about 900 meters and is populated with 330 people belonging to 80 households. The people possess 200 acres of dry lands of which 110 acres is used for growing minor millets under rain-fed conditions. About 40% of the population have studied up to class V.

Sembukkarai has 47 families and a population of 150 people. About 70 acres of land is under cultivation and the rest is used for grazing cattle. One boy is a graduate.

The meager development projects that reached these villages did not result in any progress. With the government’s Tribal Sub-Plan being implemented now, the tribes are hopeful of reverting back to their self-sufficient lifestyle.

The lands are undulating and over 33% are slopes, fit for only forestry, except in the valleys. According to a report by AVR Educational Foundation for Ayurveda produced after a study in 1985-87 with the support of Department of Science and Technology, since cereals are their main diet the tribes grow them on these sloped lands.

There used to be a dug well each in both the hamlets, but have now gone dry. The women hence fetch water from the stream bed for drinking purpose. Five streams wind their way between the two hamlets. Two families have now opted for bore wells and they access water at 100-120 feet depth, as per the report.

The dung from the goat pens get washed down along with top soil during rains. As only the subsoil remains, there is poor cropping despite good rains during the northeast monsoon. Despite the natural odds, the tribes were self-sufficient, and practiced barter system.

The traditional main crops cultivated are ragi, sorghum, horse gram, pearl millet, kodo millet, foxtail millet, barnyard millet and little millet, in their order of importance. They consume rice only on festival days. They cultivate vegetables like cluster beans, brinjal, chilies and tomato for their own consumption.

“The crops are organically cultivated and the two communes were self-sustained if they got good showers,” said Rajula T, senior scientist at the Sugarcane Breeding Institute (SBI), who leads the TSP team. “They exchanged the produce among themselves; no surplus was left and hence there was no question of marketing the produce.”

According to the report by AVR Educational Foundation, the majority of the people used to grow food crops only for six months, the place being in a rain shadow region. Traditionally, the yield was enough for the year’s consumption.

Rengasamy, one of the chieftains, said that the lands are owned individually but cultivated collectively. The tribes had a strong dislike for chemical fertilizers and hybrid seeds, as they believed it would be harmful to human beings and soil health. They could not afford to hire plough animals from non-tribes or buy farm inputs.

Women helped in sowing and post-harvest activities such as cleaning, threshing and storing. The Irula women and men also graze cattle.

Under the Forest Rights Act 2006 (FRA) they are able to gather minor forest produces like soap nut, tamarind, gooseberry, myrobalan seeds and sell them in the market. “But we get very little money as middle men exploit us,” said Mallan, an Irula and president of the Irula Adivasi Welfare Society.

While deforestation was pushing them to the land, the land itself was losing fertility, states the report. They started to face food shortage for almost half of the year and depended on wild tuber, wild greens and vegetables.

After full-fledged marginalization set in during the eighties, they entered a period of rapid land alienation in the last 20 years, according to Mallan. “People from the towns started buying our people’s lands for meager money,” Mallan told VillageSquare.in.

“Few families from the intermediary Gounder caste had settled there and the best of the lands were occupied by them,” Bijoy C R, of Campaign for Survival and Dignity, a collective that works for the rights of Adivasis and forest dwellers, told VillageSquare.in.

“Some of our tribesmen now work on their own lands as wage workers for the persons who bought the lands,” said Rengasamy. “Dependence on traditional agriculture reduced due to lack of rain and the people lost the seeds of native crops.”

Shopkeepers from the intermediary caste supplied seeds, and other essentials on credit and also lent money. After paying back their debt in kind, majority of the Adivasis had very little left for their own use. Hence they had no surplus agricultural produce to sell. Besides loosing purchasing power, the newer exploitative forces led to a decline in their living standards.

“Drastic deforestation and encroachment of elephant corridors due to indiscriminate land use changes by outsiders who bought or usurped lands near the forests has made wild animals intrude into agricultural lands and human habitations,” said Bijoy. “This has resulted in increased man-animal conflicts.”

Villagers by and large said there was hardly any development work over the years. Village infrastructure of Domanur and Sembukarai testifies for itself. The hamlets are among the 52% of 1,45,000 villages in India do not have piped water supply.

The hamlets lack all-weather road and do not have a mode of public transport till date. Hence after primary education, students – especially girls – could not go to towns for further studies. Only in 2015 the local primary school was upgraded as a high school.

The hamlets were electrified only in June 2020, by the efforts of the local MLA. A bridge across one of the five minor streams separating the two hamlets and eight small bridges and causeways are under construction currently by the state government.

Besides a few NGOs, the forest and agriculture departments did take up some work. But the works were neither comprehensive nor consistent, said Bijoy. Prior to introduction of the Tribal Sub-Plan in October this year, the women were given training in tailoring by an NGO in Coimbatore.

“I could not go to the training regularly as I had to go to work in order to pay college fee for my daughter. Skipping work would have affected her education. So I was unable to learn tailoring fully,” Radha (37), a tribal woman, told VillageSquare.in.

The Sugarcane Breeding Institute, Coimbatore came to provide succor for the beleaguered community. As the state had a poor record in implementing TSP, in 2015 the Ministry of Tribal Affairs granted the institute TSP funds for development of Irula tribes in Coimbatore and Nilgiris districts.

“The project is being implemented through participatory mode and is aimed to create sustainable villages that would leverage their natural advantages and traditional experience,” Rajula, told VillageSquare.in.

“We discussed with the tribes to identify specific areas of intervention and to initiate the process of joint and individual activities,” she said. “Based on the needs they expressed, it was decided to reintroduce traditional crops and to provide other livelihood support.”

On their first visit in October 16, the SBI team gave agriculture tools and implements such as battery-operated sprayer, dehusker, etc. besides household needs such as rain coats, and torch lights. Induction stoves and compatible vessels were given as getting firewood during rainy season is difficult and there are restrictions in felling trees.

Sewing machines were given to 11 women, who had received training. Murugatha (25), a mother of three, said she had started to stitch children’s clothes in the village and hoped to earn with her tailoring skills. Radha said she was eager to complete the training since she has a machine now.

Arrangements have been made to provide a mini flour mill for grinding wheat (from PDS outlet) and other minor millets cultivated by them in their village. Now they travel 8 km to come out of the forest to grind it.

In December the team distributed improved seeds of the crops they cultivate and saplings of a few fruit trees as per the tribes’ request. These inputs would help revive the dwindling agriculture and horticulture and restore their self-sufficiency, said the SBI team.

Men said they would be able to make use of the implements and other inputs and revive agriculture. SBI team members said that their support would continue until significant results are seen and as long as the people needed external support.

The team plans to provide motor pumps to a few villagers who have bore wells. They may provide irrigation pipes as well. A total of Rs 50 lakh worth direct benefits have been sanctioned for the year 2020-21, said the SBI team.

Activists however expressed a cautious view. According to Bijoy, unless the land alienation and resource access issues are addressed by implementing FRA, the development initiatives would bring little change. Independent activist Mac Mohan said that participatory mode would be vital to sustain motivation of the community in the development process.

George Rajasekaran is a journalist based at Salem, Tamil Nadu. Views are personal.

George Rajasekaran is a journalist based at Salem, Tamil Nadu.