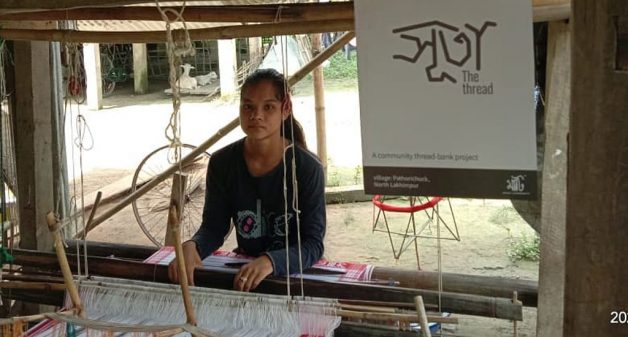 Pathorichuck is a village of self-sustaining people. They grow their own food, weave their own traditional clothes, build their own chang ghar  or bamboo house on stilts. The 280-odd families, comprising mainly of Mising tribes, jointly plan steps to restructure their lives after the annual floods caused by an anabranch of Brahmaputra and Subansiri river.

Pathorichuck, located on the banks of Subansiri river, is one of the 144 villages of Majuli, an island district.  One needs multiple modes of transport to reach the village.  A six-hour bus ride to Jorhat from Assam’s capital Guwahati, a taxi ride to Neemati ghat, and then a ferry ride on the Brahmaputra takes one to Majuli.

From Majuli, one can reach Pathorichuck after a ride on a traditional bamboo boat and then a walk or bicycle ride over three bamboo bridges. Being remote has served the residents of the village well in certain aspects.

“You won’t find any malnourished adult or child here. They are slim but healthy, as they consume home grown unadulterated food and pure honey collected from nearby forests,” said Rishi Raj Sarmah of Maati Community, a cultural center.

“They breath pure air as there are no industries or motor vehicles. Villagers walk, cycle or take traditional boat rides. There hasn’t been a single COVID-19 case,’’ Sarmah told VillageSquare.in. However, the remoteness of the village hampered commercial development.

The Maati Community is multi-cultural and activity center Sarmah and his wife Pabitra Lama Sarmah, residents of Guwahati, established in 2014. Maati is a place to buy the best handicrafts from northeast and other states and also a platform for young artists, designers and entrepreneurs from different regions to exchange ideas, discuss their journey and tell stories through their performances.

It was during these cultural exchanges the Sarmahs started interacting with self-help groups of Majuli and realized that the villagers had nothing to do for long periods of time in a year. Residents of Pathorichuck sustain themselves only through agriculture. A few make the famous Majuli face masks.

Villagers remain idle from June to September due to monsoon and flooding, and from September to October they remain busy preparing the flood affected land. Between sowing and harvesting and after harvesting also they are free for a period.

“We wanted them to be more active and earn to be able to meet other expenses like buying clothes, paying children’s tuition fees, etc. plus have some savings,” said Pabitra Sarmah. “The only other activity they, especially women, know is hand loom weaving as they learn it right from childhood.’’

The women could only weave ugon, dumer, ege and other such traditional garments whose weaving techniques have been handed down for centuries from one generation to the other. They have been using the same motif of ghai yamik or the distinct diamond shapes for which the region is famous for.

They had never marketed their woven products. The only commodities they had been selling were excess food grains and poultry products. As there was no money, younger generation preferred the arduous journey to Majuli and work to earn even a paltry sum to weaving.

Maati decided to put the villagers’ weaving skills to better use. “We wanted to create a sustainable model amongst weavers of Pathorichuck where nearly 70% of women, that is 173 of them, were expert traditional handloom weavers,” said  Sarmah. “We planned a pilot project named Xuta, (pronounced as suta) meaning thread.”

Initially 10 women showed willingness to join Xuta and by the time the project started operating three more joined. Maati asked the women to weave something which will have pan India buyers. So without changing their loom sizes or the designs, the artisans were asked to weave stoles which can be used by everyone.

By the end of the pilot project, looking at the advantages, all the women weavers wanted to join the second phase of the project.  Each woman was given three kg good quality cotton thread free of cost, a health insurance policy worth Rs 2 lakh, a bank account in the Assam Gramin Bikash Bank, and a buy back mechanism.

“We also paid for the repair of their old traditional looms at home. For the first time, a yarn passbook was given to each weaver so that they could keep a record of the amount of yarn they had used and keep a tab on unused yarn that could be used further,”  said Pabitra Sarmah.

“We insist on buy back as we don’t want any weaver to wait endlessly for payment for the work she has done. What the initiative has been able to achieve is to instill a sense of purpose in these women,’’ Pabitra Sarmah told VillageSquare.in.

Women got the yarn of the color of their choice in August and by 1 October, Maati had received 283 stoles. The  weaving charge was fixed as Rs 300 per stole. Each weaver was paid around Rs 3,000 within 48 hours of depositing their work.

“As we had already spread the word through social media, within 72 hours 270 stoles were sold out. We charge Rs 690 per stole and make wholesale offers with a minimum of 12 pieces. Our buyers are designers and boutiques,’’ said Sarmah.

And to oversee the work from the point of distributing yarn to collecting the finished products and to ensuring the products reached Maati center, Sanjay Payeng, a local tailor has been appointed for a monthly salary. Payeng is happy with his new assignment.

“I plan to slowly teach these women tailoring which will increase the variety of our products,” Payeng told VillageSquare.in. “The new bridges help us reach the jetty to take the boat ride to Majuli. So it has become easier for me to courier our products to Maati center.’’

Weavers Rumi Payeng (25), Maina Payeng (35) and Buleswari Payeng (47) are happy with Xuta. They said that the money they earn will help them cater to the demands of their children and meet other household expenses.

“We need advance orders and more finances to increase production,” said the Sarmahs. ”Our women with their handlooms can compete with any power loom production.” They want to build a community center and also involve women weavers of other Majuli villages. “We are hopeful that we will attain this target very soon.’’

Surekha Kadapa-Bose is an independent journalist based at Thane. Views are personal. Email at surekhabose@gmail.com