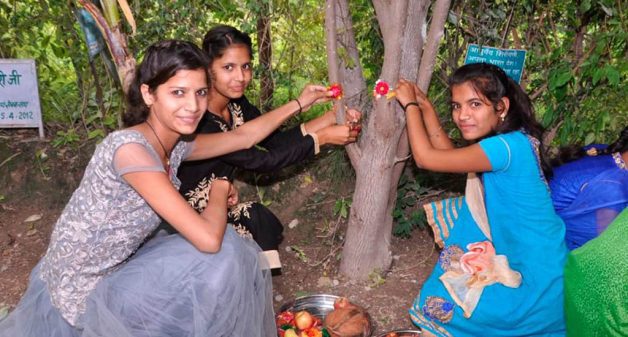 “Which one is more gratifying and exciting, news of being named for prestigious Padma Shri award or sitting on the hot seat in front of film star Amitabh Bachchan during the Kaun banega crorepati program?” That was our first question to Shyam Sundar Paliwal, former chief of Piplantri village in Rajsamand district of Rajasthan and a known crusader of eco feminism in the country.

“Neither,” said Paliwal. “Betiyan and upvan (daughters and gardens).” Though it was an unexpected response, one can easily appreciate his terse yet honest answer when one visits Piplantri and sees his untiring and the dedicated struggle for the upliftment of girl children and development of the natural environment for more than a decade.

The village, which traditionally considered the birth of a girl child as a curse, today not only welcomes girls but celebrates their birth. The village, situated in an arid zone of the country, has today lush-green surroundings full of trees of different species and ages.

Groundwater table which was once more than 330 feet deep has now risen and is now only 40 feet low. The village is like a green island surrounded by dry and barren landscapes. Piplantri, once a nondescript village in Rajasthan, is now a well-known model village which has won national and international accolades.

In the year 2005 when Paliwal was elected as the sarpanch (head) of the Piplantri village council, the entire area had been experiencing drought for seven consecutive years. Water was transported through rail and was distributed in villages by tankers.

Mining and dumping of mining wastes in surrounding areas were adding to environmental woes. Determined to bring desirable changes to the village, Paliwal took initiatives. He initiated construction of earthen check dams, anicut, and other water harvesting structures for the storage of rainwater.

Unfortunately, in 2006, Paliwal’s 14-year-old daughter died of dehydration. The family members and the villagers had tears in their eyes when Paliwal, after performing the last  rites and rituals, planted a sapling in the memory of his daughter in the village pastureland.

“When I saw the teary eyes of all the fellow villagers, I thought, if planting a sapling in memory of my daughter can arouse such emotions and bring all the villagers together, why not start planting trees after the birth of every girl child in the village,” recalled Paliwal.

He discussed the idea with his family and the village council. Everyone agreed to the idea. It was decided to plant three saplings – each in the name of the new-born, mother, and father – after the birth of every girl child. Later, it became 111 (1+1+1), representing the coming together of three major stakeholders and also an auspicious number.

A few villagers opposed the idea of 111 trees for every girl child, fearing that they might have to forego the part of the pastureland which they had illegally encroached. However, the goodwill which Paliwal and his village council had earned stood them in good stead, and all the villagers accepted the proposal.

The practice of planting 111 trees to celebrate the arrival of a girl child continued. Additionally, Paliwal introduced a system of collecting Rs 21,000 from the community and Rs 10,000 from the parents and depositing the collected amount as an investment in a local bank or post office. The amount could be withdrawn only when the girl turned 18.

Parents too promise to maintain planted trees and to educate their daughter. The girls grow treating the trees planted on their birth as their siblings. Every year, two days before rakshabandhan – the festival where girls honor brothers – girls tie raksha-sutra or rakhi  to the trees and vow to protect them.

The day is celebrated as an environmental festival and parents take a pledge not to marry their daughters before they attain the legal marriage age of 18 years. “Now every year we run a plantation drive in July and August when parents of girl children (born in the last one year) take initiative and plant saplings (111 saplings per child) in the name of their respective daughters.

“It helps both in planning and organizing plantation and also in minimizing the mortality of saplings,” said Paliwal. The species of the trees and plantation sites are decided in advance. Piplantri has now its own nursery which has reduced its dependence on the market for the saplings.

Villagers have already planted about 4 lakh saplings of various species including neem, sheesham, mango, Indian gooseberry, banyan, peepal, arjun and bamboo in the last 15 years and many of those are now well-grown trees.

To save the trees from termite infestation, villagers planted aloe vera plants around them. Now these trees and the aloe vera are the sources of livelihood for many villagers.

Fateh Singh, a farmer in his 50s, recounted the changes. “Now we have wider, well-lit roads. There is more greenery everywhere and the environment in and around the village has improved,” he said. “There is no scarcity of water. Villagers, who were not able to take even a single crop in a year, are now growing two crops.”

Kanchan Joshi, mother of 14-year-old girl Tanisha, still remembers the day when she and her husband planted saplings after Tanisha was born. “I envy my daughter as I don’t have tree-brothers like her,” said Joshi.

Villagers frequently visit plantation areas, locally called upvan (garden). However, for Gita, Nikita, Kamla and Komal, all students of class IX, the area where their tree-brothers are growing is the place for peace and tranquility. “All four of us come here regularly. We are emotionally connected to this area,” said Nikita while showing some of the trees her parents had planted.

Kiran Nidhi Sansthan, a development organization that Paliwal started in memory of his daughter, works towards environment protection and restoration. It also ensures social justice by reducing gender inequality, and the management of pasture and common land. The organization provides opportunities to local youths to learn and contribute towards social development, livelihood opportunities to women such as sanitary pad manufacturing that ensures their personal hygiene.

Piplantri has been recognized as an ideal gram panchayat by the Government of India. People from across the globe visit Piplantri to learn the Piplantri model of development. Besides sharing screen space with actor Amitabh Bachchan on the TV show Kaun Banega Crorepati, Paliwal has won many awards and laurels for his exemplary accomplishments.

The most prestigious and recent among them is Padma Shri, one of the highest civilian awards, that the government declared on 26 January, 2021. “These awards boost confidence and are inspirational for me. Further, the recognitions which Piplantri has got have encouraged many boys and girls of the village to join and support our initiatives,” said Paliwal.

Paliwal aspires to make Piplantri self-sustainable and chemical-free, to introduce improved breeds of livestock, and to plant more fruit trees around his village. He believes that saving girl children, trees, and common lands of the villages should be the objectives of all village leaders. “if a leader works with full honesty and proves one’s worth, villagers will come forward to bolster their leader,” he said.

Niraj Kumar is a professor at the School of Rural Management, Xavier University, Bhubaneswar. He can be contacted at prof.nkumar@gmail.com. Piyush Tendulkar (piyushtendulkar@srijanindia.org) is a project executive and Prasanna Khemariya (prasanna@srijanindia.org) is the chief executive officer at Self-Reliant Initiatives through Joint Action (SRIJAN). Views are personal.