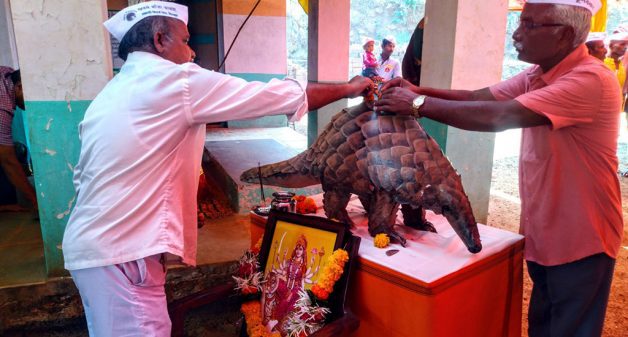 On February 20, the World Pangolin Day, residents of Dugave village, located about 100 km from Mumbai, worshipped a Pangolin replica placed near Goddess Waghjai, the village deity. They prayed for the survival and safety of pangolins and for wisdom for people so they would not kill the endangered mammal.

“We could not host Khawlotsav festival like last year due to the pandemic restrictions,” said Rajaram Kadam, the priest. “Last year we kept the pangolin replica in a palanquin and carried out a procession around the village. We visited every house so that everyone could pray.”

“Half of the village of 750 participated in the procession when we brought the pangolin replica from the village forest to the temple,” Kadam told VillageSquare.in. “During the program youngsters wrote and sang songs praising the mammal.”

This year, over 25 villagers including priest Rajaram Kadam offered flowers to the pangolin replica. Once villages around this region were known for hunting and poaching of this endangered animal. But now they have taken an oath to protect the pangolin, and one aspect of the protection is placing the pangolin in their altar.

For many decades, people used to hunt pangolin in the Konkan region of Maharashtra for its meat and the lucrative scales that were sold to smugglers. The area comprises of 162 villages in Chiplun administrative block in Ratnagiri district and has a population of about 1.5 lakh people.

The pangolin is listed as an endangered mammal under India’s Wildlife (Protection) Act, 1972, and is also classified as Endangered in the IUCN Red List. The Indian Pangolin (Manis crassicaudata) and the Chinese Pangolin (Manis pentadactyla) are found in India. It is among the most trafficked mammals in Asia as pangolin scales are in high demand in China and Vietnam.

In 2016, wildlife protection officials seized 44 kg of hunted pangolins in raids across the region. This seizure proved to be a catalyst in pangolin conservation in the region. Sahyadri Nisarga Mitra (Sahyadri Natures’ Friend), a local conservation organization, began a campaign to protect the animal.

“We initially patrolled at night, to identify areas where we could find pangolins. We must have done patrolling for over 500 nights,” said Bhau Katdare, founder of Sahyadri Nisarga Mitra (SNM). “But pangolins cannot be spotted with naked eyes.”

So the SNM team installed 40 camera traps across these 162 villages and forests nearby. “We have footage of 1,500 days till now,” Bhau Katdare told VillageSquare.in. “With the camera traps we spotted over 125 pangolins, confirming their existence in the area.”

The SNM team visited 162 villages in Chiplun administrative block where hunting of pangolins was common. They conducted over 20 meetings for residents staying at various hamlets of Dugave village, where the team was already working.

“We told them about the importance of pangolins, and how they are helpful to their agriculture and environment by eating insect pests and tending the soil,” Katdare told VillageSquare.in. “To highlight their status as an endangered animal, and spread the message of saving pangolins across the Konkan region, we started the Khawlotsav.”

“We see pangolins in the forest near our village,” Mahindra Kadam, one of the villagers, told VillageSquare.in. “Hunters would kill them. We were not aware of the animals’ importance till Sahyadri Nisarga Mitra activists told us.”

Many villagers also said that they had heard about poachers killing pangolins but were not aware that it was happening in their villages. “Since we know about the importance of the endangered mammal now, we took an oath to protect them,” said Mahindra Kadam.

“Everyone understands the importance of pangolins after the awareness programs. Now we question people who move suspiciously in the forest,” Chandrakant Tandkar, deputy village head of Dugave, told VillageSquare.in. “Villagers now know that they should not hunt pangolins and should report if they spot any hunters in the village forest.”

Even though the villagers of Konkan region have become pangolin protectors, illegal poaching and trade of pangolins still thrive; despite severe punishments of up to five years in jail for hunting the animal. Officials have been trying to crack down illegal wildlife networks.

Last month, Indian forest officials seized three live pangolins during a raid in the Nanded region. Nearly 6,000 pangolins were seized from illegal trade between 2009 and 2017 as per factsheet of TRAFFIC, a wildlife trade monitoring network, published in 2020.

However, the estimated total of 5,772 seized animals is likely to be an under-estimate, as per the report. The officials of Wildlife Crime Control Bureau (WCCB), did not respond to questions on the number of pangolins killed or cases filed every year.

According to Andheria there is rampant poaching of pangolins but the animals survive due to their behavioral trait. Pangolins, weighing 8-12 kg generally, are nocturnal, mostly stay in their burrows in the jungle and come out only for food. Their time outside the burrow depends on season and availability of food, which is ants and not termite, as general believed.

“Along with the forest department of Madhya Pradesh, we radio tagged three pangolins in September 2019 in Satpuda and Pench Tiger reserves,” Andheria told VillageSquare.in. “And we have been studying their behavioral pattern in order to develop strategies to protect them.”