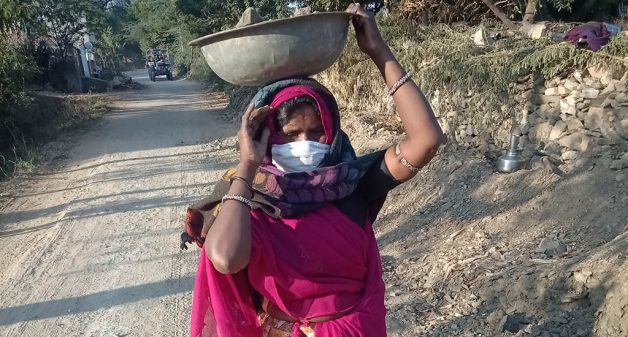 Durga Gameti (41), of Pada Khadri village in Sakroda panchayat used to work as a laborer in the mines. The lockdown left her with no job and no income. The family found it hard to survive as the little savings that they had were exhausted.

The nationwide lockdown owing to the coronavirus pandemic in the last week of March 2020 resulted in a massive reverse migration from the destination back to the source in large parts of the country. It was the second largest mass migration in the history of India after partition.

Many lost their livelihood. On the one side the health sector was struggling and on the other the economy suffered. The gross domestic product (GDP) contracted by 23.9% in the first quarter of financial year 21, against 3.1% growth in the previous quarter.

Restoring normalcy was a challenge. Several organizations offered support and relief packages for the benefit of the likes of Durga Gameti who had lost their jobs or had returned. Tata Trusts and Centre for Microfinance initiated Mission Gaurav and helped returned migrants access government schemes.

The focus of Mission Gaurav was to ensure immediate food security, medium term access to financial assistance and support in employment creation. The aim was also to support the migrants and those who lost jobs, to access different government schemes.

The program which was rolled out in September 2020 in Girwa, Sarada, Mavli and Bhinder administrative blocks of Udaipur district. Manjari Foundation and Hanuman Van Vikas Samiti, non-governmental organizations, facilitated the program.

The teams conducted awareness meetings about the project and its aims, followed by registration camps. This helped the villagers approach them and obtain support. There were instances like that of Roshan Lal Chaudhary, where the team had to visit him at home since he was unwell.

Roshan Lal Chaudhary of Singhavaton ka Vaada village started working as a laborer in stone factories at the age of 10. The team visited Chaudhary’s village in October 2020. His medical records showed that he suffered from silicosis. The family was not aware of the silicosis pension scheme of the Government of India.

The team took the family and submitted all relevant documents including medical records at the e-Mitra portal. A month after filing the application, Chaudhary received Rs 1,500 in his bank account. Since then he has been receiving the pension every month.

Several villagers did not have the relevant documents, or had documents that had their name, date of birth and other such important details wrong. Often these made a person ineligible to avail the benefits of the government’s welfare schemes.

Punaji Meena of Lahudara village in Paduna panchayat and his sons were left without an income during the lockdown. He is 60 years old, but his age was registered wrongly as 42 in his Aadhaar card, making him ineligible for government pension.

Using his Aadhaar card, land documents, Jan Aadhaar, and bank passbook, the Mission Gaurav team registered his name in e-Mitra under Old Age Pension Scheme and PM Kisan Samman Nidhi – which offers a minimum support of Rs 6,000 per year to all small and marginal farmers. Meena became a successful beneficiary.

About 20 women of Sakroda panchayat enrolled their names under MGNERGS. Within a couple of days, they got an opportunity to clean the roads in the village. They have been assigned work since then and have been earning Rs 1,500 to 2,000 per month.

The intervention led to creation of a lot of MGNREGS job cards. This put pressure for the panchayati raj institutions (PRIs) to create jobs. Though this created some resentment among the PRI officials, it led to work and many villagers benefitted.

The team helped Biramlal Meghwal of Borikua village get his deceased wife’s insurance amount of Rs 2 lakh, since she had registered under Pradhan Mantri Jeevan Jyoti Bima Yojna as a member of a self-help group. There have been many such instances. In all, the Mission Gaurav team helped more than 18,000 villagers access various government schemes.

Mission Gaurav was a pilot project which ended in February 2021. The project resulted in benefitting migrants and poor households residing in rural pockets. The people residing in the hinterlands need to be connected with government’s social schemes.

During implementation the team found that lack of awareness and illiteracy were the main reasons that villagers were not accessing government’s welfare schemes. Learnings can be used to scale up access to government schemes so as to target communities. The process can be replicated in other locations as well.