Switching to organic farming practices has resulted in improved soil health. It has reduced cost of cultivation for farmers, despite organic cotton fetching the same market price 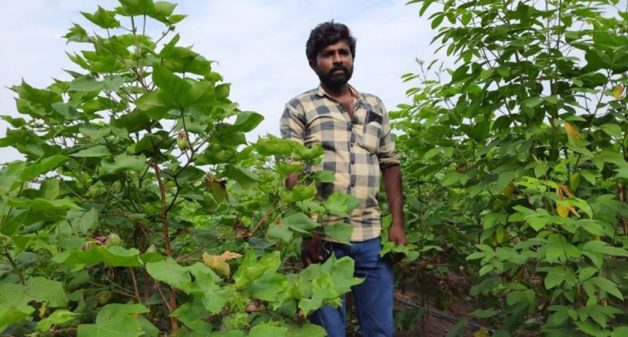 After switching to organic cotton cultivation, soil health of Hemantbhai Metaliya’s land has improved and cost of cultivation has reduced (Photo by Piyush Vadodariya)

It was the same with Metaliya and Kakadiya. With easy access to mobile phones, radio, and television they said that they heard about organic farming a lot. But they did not take the effort to practice organic cultivation, though they have been farming for about 15 years.

When they joined the Better Cotton Initiative, a project being implemented by Aga Khan Rural Support Programme – India (AKRSPI) in Rajkot district to promote sustainable farming practices, they learned more about organic farming. Having switched to organic farming, they see the difference in their farms.

The main crops of Rajkot district are cotton and groundnut. About 60% of the farmers grow cotton. About 60% of the land is under cotton cultivation. However, conventional farming has been the norm. Farmers used banned pesticides like monocrotophos, which created health issues. Beneficial insects disappeared from the land.

With the aim of promoting sustainable agriculture, workshops are conducted under the Better Cotton Initiative. The focus of the workshops is to provide farmers with information on agricultural practices that reduce input cost and improve production.

The workshops are held in farmers’ land or at places where it is possible to reach the maximum number of farmers. Technical modules are shared as per the crop pattern – before sowing, after sowing and during picking; other modules are timed as per the season and farmers’ needs.

The switch to organic

Often farmers hesitate to switch to organic practices, as it does not produce immediate financial results. “The fertility of the soil has reduced to such an extent that the farm cannot yield 100% of the crops by providing only organic fertilizers,” said Ashok Mer, one of the resource persons at the farm workshops.

Despite a similar challenge that they would face, the young cotton farmers Metaliya and Kakadiya were convinced about the benefits of organic farming, and decided to give it a go about two years ago. Earlier Metaliya used 17 bags of a mix of chemical fertilizers on his one-acre land. He realized that the cost of fertilizer was way higher than the benefits he was able to reap through it.

He also noticed that his soil quality was deteriorating by the day, as he could physically feel the soil becoming hard. He noticed that earthworms had disappeared from his land. He then decided to conduct a soil test for his land, which confirmed his observations as organic carbon was extremely low. So he decided to act.

The farmers started preparing bio-pesticides, such as jivamrut, dasparni, akadano, ajamastra, buttermilk solution and neemastra in their field. The main ingredients of these bio-pesticides include cow urine, cow dung, leaves of neem tree, papaya, ricinus, karanj and custard apple tree, buttermilk, carom seeds, etc. which the farmers can easily access, without spending much money.

They either spray the bio-pesticides manually or use drip technology. They have been able to prevent and control pest attacks and diseases using these. For fertilizer, they use farmyard manure. They have also adopted alternate cropping pattern to sustain soil health, besides growing black gram and green gram, plants that help fix nitrogen in the soil. They also grow organic vegetables for the family’s consumption.

A pioneer in organic farming

While the young farmers only came around to organic farming recently, Lilaben Lakhtariya had adopted this practice 15 years ago. Lakhtariya’s farm has been an organic farm for the past 15 years, setting an example for the rest of the community in her village, Lalavadar.

As one of the pioneers of organic farming in the village, she is a wealth house for anyone that is interested in organic farming. Her knowledge and work on this field has won her awards and a place in KVK’s scientific advisory committee.

Not only is she a farmer, she is a serial entrepreneur as well. She has a Gir cow whose urine is crucial for organic farming; and milk adds additional income to the family. She makes organic ghee using the milk and sells it at fairs in Ahmedabad each year.

The farmers sell the crop in regular markets as the seeds they use are BT seeds. “The yield with pure organic seeds is less and so farmers prefer BT seeds,” said one of the resource people. “Moreover, the market does not necessarily provide a much higher price for organic cotton thus it is difficult to convince the farmers.”

However, the farmers are happy with the results. They have been able to observe the changes, after adopting organic practices. A soil test showed that the percentage of organic carbon in the soil had increased. Beneficial insects like ladybug, Chrysoperla, mantis, butterfly and earthworm returned and the crops started looking healthier.

For Metaliya, who owned three cows, the shift to organic cultivation was relatively easier. “If farmers are not even able to meet the cost of the expenses and the soil health deteriorates, then how will a farmer survive,” he said in retrospection.

Kakadiya is extremely happy with the switch. “Though I had to spend a lot of money in buying a cow to switch to organic farming, I’m happy because it has opened many doors for me,” he said. As he grows groundnut in addition to cotton and as value-added organic products fetch more income, he started a small-scale groundnut oil production unit in his farm with his brother. Sale of the oil has increased his income manifold.