Grasslands conservation, initiated to ensure water availability has increased the water table, resulting in reverse migration and cultivation of crops, and prevention of soil erosion 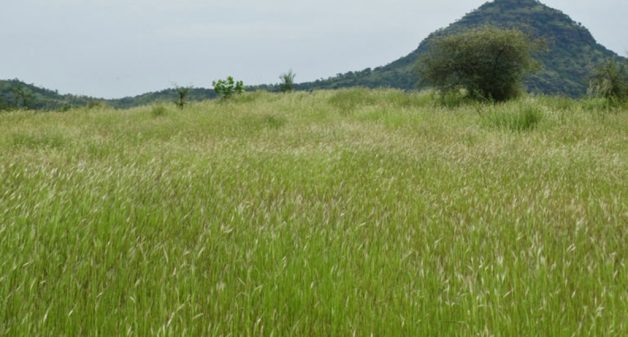 Lamkani, a village 40 km from Dhule in Maharashtra, was known for its grasslands and for being fodder-rich in the pre-independence era. The situation changed after the drought in the 1970s. The lush green village became completely barren after enduring drought again in the 1990s.

Lamkani could no longer provide employment to its people nor fodder to its cattle. The village had become completely dependent on water tankers. “There were fights over water – sometimes over a single pot. Without fodder and water, people had to sell their cattle. Most people had to leave the village to work in sugarcane fields,” said Vijaya Patil, a 36-year-old resident of Lamkani who participates in the watershed development of the village.

“Twenty years ago, we did not have 10 liters of milk available in Lamkani. Today, the village sells about 3,000 liters of milk to Dhule every day,” said Dhananjay Newadkar, who initiated watershed development in 2000, to solve the water problems.

Dhananjay Newadkar, a pathologist by profession, hails from Lamkani. After suffering a near-fatal accident that left him bedridden, Newadkar decided that if he survived the accident, he would attempt to solve his hometown’s severe water crisis. He first decided to work on the 600-hectare watershed ridge area of the Govardhan hillock, from where all of Lamkani’s streams originate.

Where Lamkani village ends, a tributary of the River Tapi known as burai flows. “The river got the name ‘burai’ meaning ‘bad’ in Marathi because there was hardly ever any water in it,” said Newadkar. Overgrazing and loss of biodiversity had left the hillock barren. The streams and wells went dry.

Compartment bunding and other watershed development measures will have to be done every year, and would not ensure that all the rainwater got harvested in the village. Lamkani’s annual average rainfall being around 300-400mm, the village needed to save every drop of water.

“The entire watershed ridge area of 600 ha of our hillock was barren. How do we ensure that all the rainwater gets percolated here?” Newadkar started his mission with this question.

Ban on grazing and tree felling

After studying the topography, Newadkar realized that watershed development alone will not solve Lamkani’s water troubles. He decided to adopt the traditional practice of charai bandhi (ban on grazing) and kurhad bandhi (ban on felling trees) to conserve the grasslands on the hillock.

Initially, the ban on grazing and tree felling was very difficult to enforce since Lamkani has a significant population belonging to the pastoralist Dhangar community. According to the Lamkani Village Forest Micro Plan that quotes the 2011 census, of the 883 landless families in Lamkani 723 families are cattle-keepers.

“We did not enforce the grazing and tree-felling ban overnight because it would harm the communities who depended on the grasslands. Every year, we worked to protect and conserve 50 ha of the grasslands,” said Newadkar. To encourage the Dhangars to follow the new rules, Lamkani waived the gavki, the traditional compensation that the Dhangars paid the village panchayat.

Newadkar approached all the tamasha artistes (folk artistes of Maharashtra) and kirtankars (narrators of sacred stories) that performed in Lamkani and asked them to incorporate information about protecting and conserving the hillock in their performances.

“When we started this work, people were not convinced easily. But Newadkar’s dedication paid off, because within a few years the artistes started talking about protecting the hillock without being told,” said Dnyaneshwar Shelar, a high school teacher from Lamkani.

The people saw the results within the first few years, and the participation of the people increased. “Initially we had to carry a television set and go door to door to show people the benefits of watershed development. Now, every child in the village knows the value of the hillock, and I see my students feel a sense of pride in the lush green grassland habitat,” said Shelar.

Grazing is a mechanism that keeps grasslands in check; historically, grasslands have been associated with both grazing as well as fires, explained Mandar Datar, scientist at the Agharkar Research Institute, Pune.

Lamkani’s success in restoring the grasslands was achieved through rotational grazing, which means that every year a 50 ha patch of the grasslands would be conserved at a time, not allowing grazing on that patch, allowing the palatable species of grasses to regenerate.

“When grazing is controlled, nature gives back. We did not plant a single tree, nor spread any grass seeds,” said Newadkar. Ketaki Ghate, ecological restoration expert and faculty at the Ecological Society, Pune said that when grasslands are conserved, the quality of the grass improves through ecological succession.

“In Lamkani, overgrazing and degraded land had led to the formation of kusali (Heteropogon contortus), a poor-quality grass. But after a few years of conservation, pavna (Sehima nervosum) and dongari (Crysopogan fulvus) flourished here. Pavna is not only a better fodder but also a species that grows in an ecologically improved area,” said Ghate.

After five rainfall cycles since Newadkar started work, Lamkani went from being tanker-dependent to water-sufficient even during drought years, said Dhanraj Patil, sarpanch of Lamkani. The water table has improved, so there is water at 10-15 feet in the wells.

“Lamkani is a populous village. But we have no water shortage despite being in a drought-prone region. We have enough water and fodder; we supply fodder to nearby villages whenever they face a shortage,” said Patil.

The restored grasslands helped Lamkani endure the changing rainfall patterns. “Now the intensity of rainfall has increased, causing soil erosion and not giving any time for the water to percolate into the soil. But grasses make the soil spongy, helping us reduce the soil runoff and harvest all the rainwater. All our adjoining villages are finding it very hard to retain the rainwater and prevent soil erosion,” said Newadkar.

Within 10 ten years, distress migration reduced considerably, as everyone had access to water for irrigation. Onions, cotton, wheat, bajri, jowar, and fruits are grown here; some farmers have started cultivating a third crop.

Forest fires and other challenges

“Our village was named Lamkani because many years ago this land was known for its grassland habitat, where a species of long-eared rabbit roamed the area frequently. ‘Long ears’ is ‘laamb kaani’ in Marathi,” said Dnyaneshwar Shelar.

Grasslands have historically been associated with forest fires, and in Lamkani too, forest fires are not an uncommon occurrence. “Every year, we make fire lines on the hillock to prevent the spread of fires, but with a grassland habitat, fires are inevitable. To ensure that the damage is contained soon, every resident of Lamkani helps,” said Shelar.

“We have also bought a baling machine to cut the grass at the right time so that fires are prevented. The bundles of grass can be used to make a fodder bank to supply fodder to other villages. This also ensures that the nutritional value of the grass is preserved,” said Newadkar.

The ban on overgrazing has been difficult to enforce from the beginning, but the pandemic made it even more difficult to keep an eye on the 400 ha of land. “We had to reduce some security measures last year. Some people took advantage of the pandemic. We noticed some unauthorized grazing. The damage was not extensive, but we lost some fodder that we could have used to feed our cattle,” said Newadkar.

Enforcing the ban on grazing requires relentless commitment, which has become slightly easier over the years but continues to be a challenge till today, said Dhanraj Patil. “Despite the challenges, community-protected grasslands have a much higher rate of success as in these cases environmental protection is tied to the livelihoods of people,” said Mandar Datar.

Vinaya Kurtkoti is an independent journalist. Views are personal.