Appalled by the lakhs they spent on alcohol, residents of a village vow to never touch liquor again. They turn their village into a successful organic model 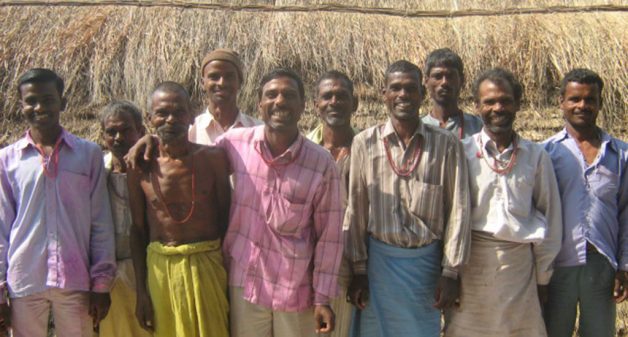 Shocked that they were spending a lot on alcohol, Kailashnagar residents resolved to quit and wore special necklace to show their resolve (Photo by Azeem Mirza)

From being a village with a high unemployment rate, whose natives were heavily dependent on alcohol, to becoming a model for organic and System of Rice Intensification (SRI) farming, the transformation of Kailashnagar, a tiny forest village in the Bahraich district of eastern Uttar Pradesh, has been phenomenal.

Kailashnagar is today completely free of alcohol and is setting new records in SRI — a low-water farming methodology aimed at increasing the yield of rice – and organic farming. Their farming methods have been so successful that farmers from different parts of the country and even the United Nations Development Program (UNDP) have dropped by to understand their techniques.

More recently, American students studying public health visited Kailashnagar to understand how their model of agriculture is meeting the nutritional requirements of its inhabitants. Two farmers from this village have also received awards from the state government for excellence in farming.

The villagers of Kailashnagar have come a long way. For decades, the occupants of this tiny forest village were known for being alcoholics. Out of the 350 villagers, 57 men, 40 women and 40 children had some degree of alcohol dependence. Very few people had jobs, and most of them made ends meet by cutting trees and selling timber.

About a decade ago, members of the Development Association for Human Advancement (DEHAT), an NGO that works with vulnerable communities, saw a huge crowd at a liquor shop in the Bichhiya market close to Kailashnagar.

They filed an RTI to find out how much alcohol was being consumed in the area. They were shocked to find that every year people from the five surrounding villages spent close to Rs 22 lakhs on alcohol. This figure did not take into account the illicit liquor being made and sold there.

Jitendra Chaturvedi, chief executive at DEHAT, informed the villagers of the amount spent on alcohol. He told them that the money that should be used for irrigation, education, medicines and weddings was being spent on liquor.

The villagers were appalled by the figures and vowed to never touch alcohol again. The first one to give up alcohol was Geeta Prasad, who was infamous for his love of liquor. Inspired by him, many of the other villagers followed suit.

Liquor producers in the village voluntarily disbanded their facilities and to ensure that no one took to liquor again, the villagers organized a religious ceremony and wore kanthis (special necklaces) to symbolize their resolve.

Now that liquor consumption had stopped, the villages began to look for better means of livelihood. But the options were limited since Kailashnagar was in forest land and there were many restrictions in place. The villagers looked to MGNREGA for jobs. But soon, they wondered why they could not use their own land for farming.

Members of DEHAT helped the villagers understand the basics of agriculture. They organized training for the farmers from different institutes in new methods. The villagers learnt to improve yield without the use of chemicals. Over the next few years, they grew a variety of crops and the once poverty-stricken village began to prosper. They were now able to meet the villagers’ food needs and also make some profit.

Prasad, who is today a prosperous farmer, recalls, “My only job was to drink all day and trouble my family in the evening. Thanks to farming, our lives have changed. The income of the entire village has increased manyfold,” he said.

Babu Ram of Kailashnagar said that the vegetables grown in his village sell the fastest at the local market, even though they are priced 25% more than that of their counterparts. “This is because we do not use any insecticide or English manure in our crops,” he said.

“We make our own fertilizer with cow urine and insecticide with garlic, tobacco and curd. Due to this, our crops are healthy and produce are tasty; hence they get sold fast. Nowadays, people from all over the country visit our village to learn our methods of farming,” he said with pride.

In 2014, Geeta Prasad won an award from the state government for cultivating 118 quintals of organic rice through SRI farming in one hectare and in 2017. Dwarika Prasad got government recognition for setting a new record in the cultivation of organic bananas.

Striving to be a revenue village

The villagers have won the battle against alcohol and poverty, but they are still striving to win their decades-long battle to give Kailashnagar the status of a revenue village. Situated near the Katarniaghat Wildlife Division, Kailashnagar is not a revenue village but rather falls under the category of Vanatangiya (a community that was first hired by the British for afforestation).

Hence, no pucca construction is allowed here. If you walk into this tiny village, you can see neither a pucca house nor a pucca toilet. There is no school, water tank, panchayat building or hospital in this village. Without the status of a revenue village, members of the village do not have complete rights over the land.

This makes them ineligible for government schemes and bank loans. Despite the many hurdles, the villagers are happy that they managed to put Kailashnagar on the map as a model of successful farming and they are hopeful for their revenue status soon.

Azeem Mirza is a Bahraich-based journalist. Views are personal.

This story was first published in 101 Reporters.